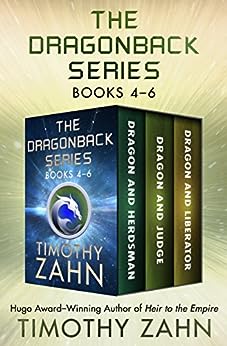 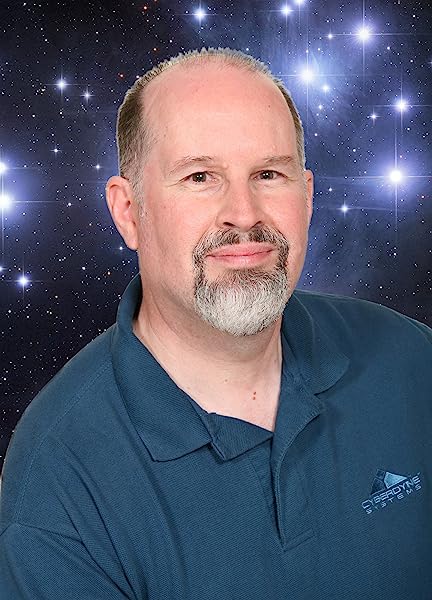 Young fugitive Jack Morgan and alien K’da warrior Draycos are inseparable—quite literally. They’ve been together since a desperate Draycos was forced to bond with Jack as his host in order to survive. Now they’re traveling the stars trying to clear Jack of a crime he didn’t commit, bring down a conspiracy to destroy Draycos’s people, and generally stay alive . . .

DRAGON AND HERDSMAN
After nearly being caught, Jack and Draycos are rescued by Alison Kayna, a reluctant mercenary who steals them away to a planet where she plans to meet some friends. But when they get there they see something they never expected: a lost colony of K’da who have all but forgotten their pride and honor.

DRAGON AND JUDGE
Just when Jack thinks he has a lead to help Draycos on his quest, he’s kidnapped by a pack of aliens—not as a prisoner, but as a judge. Jack has no idea why they think he would, or could, know how to be a judge. But they soon reveal they want him specifically because Jack’s long-lost parents were once asked to do the same thing . . .

DRAGON AND LIBERATOR
Jack and Draycos have traveled a long way and been through a lot of hard times together, and now it looks like their journey may finally come to an end. Their hunt has brought them to the man at the heart of the deadly conspiracy against the K’da, and put him within their grasp. But before they can exact justice, they must stop him from unleashing a weapon of apocalyptic power . . .

Timothy Zahn is the Hugo Award-winning author of more than forty original science fiction novels and the bestselling Star Wars trilogy Heir to the Empire, among other works. He lives in the Pacific Northwest.

4.6 out of 5 stars
4.6 out of 5
387 global ratings
How are ratings calculated?
To calculate the overall star rating and percentage breakdown by star, we don’t use a simple average. Instead, our system considers things like how recent a review is and if the reviewer bought the item on Amazon. It also analyses reviews to verify trustworthiness.
Top reviews

Margaret
5.0 out of 5 stars second half of a series of 6
Reviewed in Australia 🇦🇺 on 19 November 2020
Verified Purchase
Its quirky, well written as all Timothy Zahns books are. Very enjoyable science fiction/fantasy
Read more
Report abuse

Penelope T.
4.0 out of 5 stars A Fascinating journey into a boy becoming a man
Reviewed in the United States 🇺🇸 on 29 March 2021
Verified Purchase
These stories seem to cover a lifetime. But it all takes place in less than a year. In a multi Universe run by huge corporations and enormous security/mercenary groups who fight for whoever pays their price and a small group of traveling judges who try to keep some sort of justice and a large Army that helps the judges and supposedly ft ights for what is right, more or less. Its a place familiar to us in Star Wars and other Sci-fi futures, but it starts out with a youngboy hiding out alone on what he believes is and unowned planet, feeling a bit lost and alone after the death of his uncle just a couple if years before when he was 11. Suddenly a spectacular show, ships fight in the planet's atmosphere and before he knows what is happening one of the crafts falls to the ground. Young Jack runs to the ship, sure that noone survived, when suddenly a 2 dimensional human sized dragon- like figure, a flat picture of something that is life-sized is lying over a door looking like a cartoon whispers for help. His partner dead, the dragon awaitas his certain death. However Jack is curious and tries to figure it out, when suddenly the figure slides up his arm up his arm and flattens itself around most of his body, melting it seems, into his skin, looking somewhat like a tattoo. This creature is not, however, a helpless body and soon figures out enough English to talk to him and tries to make the boy feel safe. For a couple of days they rest and speak in broken English as the dragon recovers and learns extremely quickly from the computer how to speak English and grows a fairly large vocabulary in just a day. They talk and the human sized dragon explains his symbiotic nature and they get to know each other fairly quickly the poet Dragon, Dracus introduces himself and explains that he is a poet warrior from another galaxy from which he had come as a scout to finalize the deal to buy a small uninhabited planet from the refugees from his planet and their symbiotic h o etc as well. Only the enemy who had a machine that kills people but cause a no damage to others gas killed everyone in the scouting party and is preparing to destroy both the K'da race and the So teaches Jack about fighting for what is right
Lost people groups find one another. A boy changes raised to be a great thief suddenly partnered to a strong caring poet warrior willing to sacrifice himself for others . Jack becomes the valiant leader of a people but by an almost unbelievable and circuitous route. He starts as a child mercenary qiven a quick 2 week militaty training then sent to die. There he meets a young girl who is his age but seems pecularly soldier like, a girl who has many secrets. Then gets himself arrested and put into a slave colony by officers of the mysterious a leader of the evil plotters of this double genocide that was planned. Caught, beaten then left to die painfully in a small metal hu. He is rescued by a kindly woman who helps young kids in the colony of slave. He, escapes, taking his rescuers and a very few willing to risk their lives for freedom with a great deal of luck and Draycor ever trying to help his dragon partner find who is planning to kill his people. Then he hides on a planet and ends up being a herdsman for a group of animal like dragons they discover, always, despite his cynical outlook, caring for those weaker than himself and suddenly, this orphan kid gives hope to others and becomes a folk hero as he is caught in terrible situations because of trying to figure out how to grow to be a man of valour and wisdom like the great dragon who is his partner now for life.
It is a great coming of age story with fantastic o c creatures surrounded by evil, but with much more help than a n he ever thought he would have. The story is addicting and the characters become like close friends as you enter this weird world of tomorrow. Great young adult reading.
Read more
3 people found this helpful
Report abuse

Slaws
5.0 out of 5 stars Morally uplifting story for youth
Reviewed in the United States 🇺🇸 on 9 April 2021
Verified Purchase
Hey, I'm not too proud to say that I read young adult stories sometimes. I was able to borrow the first three books of the Dragonback series, but found them engaging, which enticed me to spend money on books four, five and six. I was not disappointed.

Not only were the main heroic characters well developed, Mr. Zahn painted fairly full portraits of even the antagonists. Only the Valahgua were less substantially developed as there was little backstory, dialogue involving them, or direct interaction with Jack or his compatriots. Jack, Alison, and Taneem especially evolved substantially over the course of their dangerous adventures.

Don't assume that these books were all about personal growth though. The twists and turns of innumerable plots keep you waiting expectantly for the next surprise foil or success of both good & bad guys' machinations. I would highly recommend this for boys or girls of middle or high school age (or even their grandparents 😏)!
Read more
3 people found this helpful
Report abuse

PickyReader
2.0 out of 5 stars Suspend rationale belief
Reviewed in the United States 🇺🇸 on 8 May 2019
Verified Purchase
I have to say that this is not a bad book. It is written well. This is just my personal opinion, which is not among the majority. I wanted to like this book. I really enjoyed the first three. They were a fun and exiting escape from real life. These three were just really to far fetched For me to enjoy. I have a really hard time believing that a 14 year old boy can do and pull off what jack did. The more I think about it the less I can believe it. The mechanics just aren’t lining up. It’s fairly disappointing.
Read more
7 people found this helpful
Report abuse

Ruth Liebert
5.0 out of 5 stars A series that is never predictable and always keeps you interested.
Reviewed in the United States 🇺🇸 on 23 August 2019
Verified Purchase
I just finished the whole series and it is really a great novel in four parts. As an adult reading about a teenaged hero, it seemed a little unlikely. I found myself expecting someone to haul him up and ask where are your parents, but other than that the characters are 3 dimensional and interesting. The locations are interesting and each has its own form, not the same. Last but not least the plot is smooth, twisty and worth following. Read it no matter your age.
Read more
5 people found this helpful
Report abuse
See all reviews
Report an issue
Does this item contain inappropriate content?
Report
Do you believe that this item violates a copyright?
Report
Does this item contain quality or formatting issues?
Report