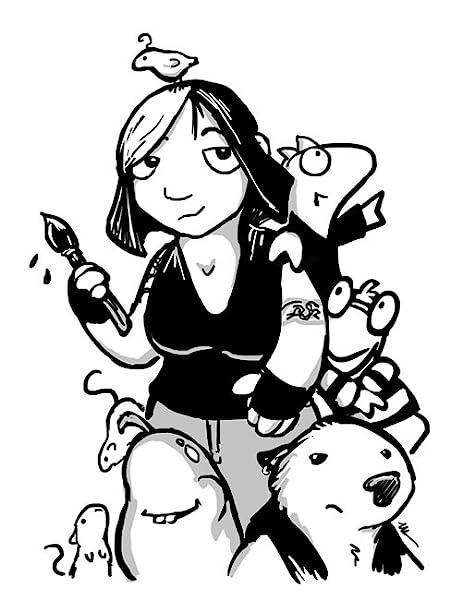 by Ursula Vernon (Author)
4.8 out of 5 stars 185 ratings
See all formats and editions
Sorry, there was a problem loading this page. Try again.
10 Days Replacement Only

Read Full Return Policy
Danny Dragonbreath is hoping to see lots of cool bats when he and his best friend, Wendell, visit Danny's cousin, a bat specialist in Mexico. But he isn't expecting to get up close and personal with a giant bat monster, who kidnaps Danny and carries him off to her lair! Now nerdy Wendell will finally get a chance to be a hero . . . but only if he can hunt down the bat monster before she permanently adopts Danny as her bat monster baby.

Ursula Vernon has packed the fourth book in this laugh-until-smoke-comes-out-of-your-nose series with fantastic bat facts and hilarity of the highest order. Wimpy Kid fans everywhere will love this decidedly un-wimpy (but often unlucky!) dragon. Perfect for fans of Wimpy Kid and Bad Kitty.

Ursula Vernon lives, writes, and draws in Pittsboro, North Carolina.
Start reading Dragonbreath #4: Lair of the Bat Monster on your Kindle in under a minute.

4.8 out of 5 stars
4.8 out of 5
185 global ratings
How are ratings calculated?
To calculate the overall star rating and percentage breakdown by star, we don’t use a simple average. Instead, our system considers things like how recent a review is and if the reviewer bought the item on Amazon. It also analyses reviews to verify trustworthiness.
Top reviews

Great Kid Books
5.0 out of 5 stars fun book for 4th & 5th graders!
Reviewed in the United States on 11 May 2011
Verified Purchase
When 4th graders come to me in the school library and want something funny, I am glad to suggest the Dragonbreath series by Ursula Vernon. It's a fun illustrated novel, with enough of a feel of a comic book to lighten anyone's mood. Best of all, Ursula Vernon really gets what makes kids laugh - gross slime, creepy dark caves, and best friends who need rescuing from all sorts of situations. The latest in this series - Dragonbreath: Lair of the Bat Monster - is sure to please kids who want humor, comics and a dash of adventure.

Ursula Vernon does a terrific job of making kids laugh and squirm at the gross, stinky descriptions, and the friends' snarky banter. But Vernon also works fun science into the mix. I know a lot of kids will think it's pretty cool that Steve is out in the jungle studying bats, trying to find new species. Really, though, what draws kids in and hooks them are Vernon's illustrations. The book is full of bold, two-color drawings in green and black. I especially love Danny and Wendell's oversized, expressive eyes. There are illustrations on nearly every page, some as comic book panels, and others as spot art sprinkled throughout the text.
Read more
4 people found this helpful
Report abuse

jessica
5.0 out of 5 stars Looks great on the shelf, but will hardly stay there.
Reviewed in the United States on 2 January 2020
Verified Purchase
Fantastic series for younger kids or those who are intimidated by large text blocks. The layout of these books are perfect for delivering a mix of easily digestible formatting, with just enough full text pages to give a sense of accomplishment for the challenges reader.

Don't think these are just fluff books though, these are solid well fleshed out little stories. Just enough innocent mischief and intrigue to keep the kids chewing through without being obnoxious.

K.Day
5.0 out of 5 stars "Dragonbreath ROCKS!", said the 8 yr old
Reviewed in the United States on 30 November 2013
Verified Purchase
Our 8 yr old son LOVED the Dragon Breath series because they make him "Laugh his head off!". He has read every book in the series, a few of them in a day. When asked why he likes these books he said "Because they have good characters, are funny, adventurous, and the story lines are crazy - crazy AWESOME!". All of theses things make this book and the others in the series incredibly interesting to a kiddo who enjoys funny adventures.

As a parent I appreciate that they are funny without being totally stupid and that they are easy to read without being "dumbed down". I would say the reading level is higher than Big Nate but not as high as say Harry Potter. These are great transition books for readers who need a bit more of a challenge. However they are also great for more advanced readers who just want to read a great story about an amazing adventure.

Overall a great series and I would highly recommend for the 8-9 yr old set.
Read more
2 people found this helpful
Report abuse
See all reviews
Back to top
Get to Know Us
Connect with Us
Make Money with Us
Let Us Help You
EnglishChoose a language for shopping.
© 1996-2022, Amazon.com, Inc. or its affiliates