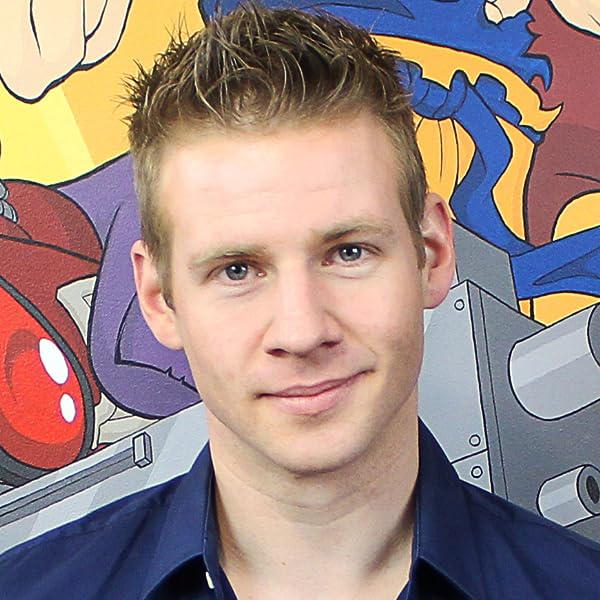 by Josiah Brooks (Author)
4.7 out of 5 stars 1,101 ratings
See all formats and editions
Sorry, there was a problem loading this page. Try again.
10 Days Replacement Only

Draw With Jazza YouTube star Josiah Brooks breaks down an easy-to-follow method that will help you to invent and draw original characters time and time again. Whether sci-fi or steampunk, comic book heroines or tattooed action heroes, animal familiars or alien races, you will discover the limitless possibilities of creating your very own characters for comic books, cartoons, video games and more!

No matter what your skill level, you can draw from concept to finished art with confidence. Jazza shows you how as he walks you through The Design Process!


• Discover. Learn techniques just like the pros use for developing characters--their backstory, personality and physicality; decide your drawing style; and explore and organize your inspiration.
• Design. Use brainstorm sketching to refine your character's persona. Use simplified lines and shapes to draw men and women, practice poses and play with body shapes, sizes, ages and outfits.
• Develop. Refine your best ideas by choosing features, color schemes, settings and context to reflect your end goal.
• Deliver. Finish your concept art with character turnarounds, expression sheets, pose variations and more to create a complete picture of your characters and their world.
Read more
Previous page
Next page

Josiah "Jazza" Brooks is an artist and animator best known for the educational and entertainment content on his YouTube channel Draw with Jazza. In 2012, Josiah created his channel to share his self-taught techniques for character design, illustration and animation, and the channel grew rapidly in popularity. As his community grew, he began producing stand-alone educational content and artist resources for his website, www.jazzastudios.com.
Start reading Draw With Jazza - Creating Characters on your Kindle in under a minute.

Josiah Brooks (aka Jazza) is an artist, animator, social media personality, author, and television presenter. He is the face, as well as the creative mind, behind the popular art YouTube channel ‘Draw With Jazza’, a highly subscribed and viewed channel, which is filled with tutorials, art challenges and competitions. A visual artist and animator, Josiah began his professional artistic career making Flash computer games and creating his own animations, including his early animated series ‘Larry of Karryon’ and (later) the animated short, in conjunction with YouTube and Screen Australia, ‘The Tale Teller’. In 2011 he began his YouTube channel, presenting animation and drawing tutorials using digital as well as traditional methods. His popular art style, technical knowledge and relatable personality meant his channel grew quickly and still focus’ on art and animation using Photoshop and Animate CC. His social media presence on other platforms has grown and with a large Twitch following he regularly livestreams on 'Live With Jazza' , creating art live, online. He presented and co-creating a children’s television art show, 'Cartoon It Up' produced by the Australian Broadcasting Commission. Josiah also founded Jazza Studios, which encompasses a successful website selling eBooks and digital art resources. He collected and loved 'How to Draw' books as a child and is excited to have the opportunity to have written some of his own.

4.7 out of 5 stars
4.7 out of 5
1,101 global ratings
How are ratings calculated?
To calculate the overall star rating and percentage breakdown by star, we don’t use a simple average. Instead, our system considers things like how recent a review is and if the reviewer bought the item on Amazon. It also analyses reviews to verify trustworthiness.
Top reviews

Divyank Shandilya
5.0 out of 5 stars 'Professional Approach in Character Design' basics
Reviewed in India on 3 October 2018
Verified Purchase
A must have book if you want to dive in professional artist's world. And even if you're a hobbyist, this book enhances your knowledge and give an idea to do it a bit professionally. If a Jazza fan, just make it delivered at your home right away!
Read more
6 people found this helpful
Helpful
Report abuse

Sourav Das
5.0 out of 5 stars A really good buy!
Reviewed in India on 6 September 2017
Verified Purchase
One of the best drawing tutorial book in the field of character development. A detailed guide to learn about the American comic style of drawing characters starting from the initial brain storming to finishing the final product.
Read more
7 people found this helpful
Helpful
Report abuse

Nimisha
4.0 out of 5 stars Awesome quality,value for money
Reviewed in India on 16 July 2019
Verified Purchase
Helpful for the ones who like to draw,awesome cover quality,and also the content of this book is everything you'll ever need to become a pro from a beginner!
Read more
Helpful
Report abuse

Shuvam Nandy
5.0 out of 5 stars GET IT NOW
Reviewed in India on 25 June 2019
Verified Purchase
A perfect book for any artist, for them to learn charecter drawing...the book focuses on every aspect of what the names suggest. So it's a 100% choice
Read more
Helpful
Report abuse

Venkatesh
4.0 out of 5 stars Four Stars
Reviewed in India on 27 June 2017
Verified Purchase
Book was good and up to the expected mark.
Read more
Helpful
Report abuse

TG
5.0 out of 5 stars Jazza's approach to character design
Reviewed in the United Kingdom on 31 December 2016
Verified Purchase
I'm a big fan of Jazza's youtube channel. One of my favourite series is where he takes input from his stream. He then uses the Discover, Design, Develop, Deliver method approach to create a character based on that input. It's that methodology that makes the meat of this book.
It won't necessarily make you a better at drawing (there *is* the, seemingly obligatory, section on head and anatomy construction wehich nearly all drawing books include) but it does share everything on the character design process used by Jazza.
Even if you're an avid follower of Jazza you'll get something extra from this book : whether it's additional information, or having all that information in one place or even it being in book format (personally I still prefer books to online). Actually, if you're an avid follower of Jazza you might just get this regardless as you'll know it'll be quality.

James
5.0 out of 5 stars A detailed and interesting look at character design and drawing.
Reviewed in the United Kingdom on 19 April 2021
Verified Purchase
This guide is high quality and well put together by someone who is obviously passionate about art and Character design. Jazza has a thriving Youtube channel with lots of content including guides and tutorials that go along with this book. If you're interested in Character Design, Art, or Cartoons this is both a great starting point and a development tool for the more experienced student\hobbyist\dabbler.

Highly recommended, and check out the Archive tutorials on youtube.

Mel B
5.0 out of 5 stars Very useful and insightful.
Reviewed in the United Kingdom on 13 August 2017
Verified Purchase
This book is perfect for beginner artists and more experienced artists too. Jazza talks you through the design process of a brand new character and to be honest I never really thought much about how the character's background story, how they perceive the world or how the culture or civilisation where they are from would affect their overall physical look. It's really given me a whole new perspective on character design and I'm really glad I found this book. Also the tips on how to draw male vs female body types is amazing. Loving reading this book, thanks Jazza! :)
Read more
5 people found this helpful
Report abuse

Fulltimespy
5.0 out of 5 stars Great starting point
Reviewed in the United Kingdom on 4 May 2019
Verified Purchase
I've been following Jazza on youtube for quite a while now.
And I found his tutorials and videos very useful.
So I deceided to pick up his book.
I'm not great at drawing, but compared to my friends I'm actually decent.

What I struggle with the most is proportions of characters, this book really helps you step by step to create characters, and showing you how to strutucre the basic face outline to make a good looking face for the character.

Pedro
5.0 out of 5 stars Great book. Just what you’d expect from jezza.
Reviewed in the United Kingdom on 11 December 2020
Verified Purchase
Bought this for my 9tr old after he started obsessing about jezza on YouTube.

It’s an in-depth book that he probably will get lost following at this age but it is cream packed full of drawing ideas to copy and I know he will absolutely love it.
Well written and illustrated as expected but probs not suitable for kids but sons age and younger.

Being a doodler myself I’d enjoy this book.
Read more
Report abuse
See all reviews
Back to top
Get to Know Us
Connect with Us
Make Money with Us
Let Us Help You
EnglishChoose a language for shopping.
© 1996-2022, Amazon.com, Inc. or its affiliates