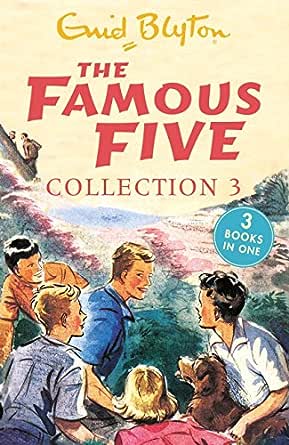 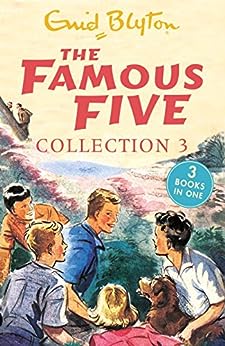 The Famous Five celebrated 70 years in print in 2012 - but the celebrations are still continuing! Everyone loves reading the adventures of Dick, Anne, Julian, George and, of course, Timmy! --This text refers to the paperback edition.

Enid Blyton died in 1968 but remains one of the best-known and best-loved writers of children's stories. She is consistently voted a children's favourite in author polls, and has over 600 children's books to her credit, including the Famous Five series, the Secret Seven series, the Naughtiest Girl series - and the Malory Towers and St Clare's series, both available from Hodder on audio. --This text refers to an out of print or unavailable edition of this title.

4.8 out of 5 stars
4.8 out of 5
343 global ratings
How are ratings calculated?
To calculate the overall star rating and percentage breakdown by star, we don’t use a simple average. Instead, our system considers things like how recent a review is and if the reviewer bought the item on Amazon. It also analyses reviews to verify trustworthiness.

1. Five Go Off To Camp.
The Famous Five (including Timmy the Dog) go off on a camping trip with their mad about insects Professor Mr Luffy. They are to camp on the moors and are looking forward to it. No one thinks there will be an adventure in the offing but they had not counted on the Spook Trains. Originally, Anne thinks she is sitting on a "Volcano" but are the spook trains as Wooden Leg Sam calls them for real? When the boys, Julian and Dick, decide to investigate further at night along with their new friend, Jock, banning the girls, George and Anne, from coming, George is furious and sulky. But George, on one of her sulky, cooling down treks has her own adventure and they find out the monied step-father of Jock, Mr Andrews, is not all he seems. The Famous Five (and this time Jock) save the day, yet again!

2. Five Get Into Trouble.
The Famous Five go on a cycling tour, which seems banal enough; however, adventure seems to follow them! They stop near a lake (the Green Pool) and meet another boy, Richard Thurlow Kent. He is the son of one of the richest men in the country, Thurlow Kent and the Green Pool is on his estate. Richard seems rather spoilt and exaggerates a bit. In any case, as the Five decide to continue on their tour Richard lies and says his mother has agreed to let him join them until his aunt's house. Dick then gets a tyre puncture and Julian and George and Timmy go off to buy some food while Anne who decides to climb a tree waits for them to come back. Dick (which is short for Richard ... or so some thugs think) gets kidnapped and Anne witnesses it all. The others including Richard Kent decide to find Dick and rescue him. Unfortunately, they find Dick but become hostages as well! In the end, Richard Kent, who had not impressed everyone with his bravery and seemed a weak personality, proves himself and he informs the Police about what happened who save The Five from the people who had mistakenly kidnapped Dick who were thugs dealing in criminal activity and were escaped convicts.

3. Five Fall Into Adventure.
The book starts with George and Timmy waiting at the railway station for the others to come to stay at Kirrin Cottage. Sadly, this holiday is only two weeks long because Julian, Dick and Anne had gone to France for two weeks. George's mother and overworked dad (who is a famous scientist) decide to go on holiday to Spain. A new character called Jo, is introduced in this book who is similar to George in that she dresses as a boy and looks like one. She used to live in a circus and now her father indulges in criminal activity and so her life is sad. Uncle Quentin, George's dad, is a world famous scientist and one day someone breaks into George's house looking for some of his important notes. Later on, we find Jo is involved. Shockingly, George and Timmy are kidnapped when they go out for Timmy's walk. A letter is sent saying if Uncle Quentin's notes are not sent George and Timmy will not be released. Due to Dick being kind to Jo previously she wants to help and they try to find George together. The person who has been behind all this is a madman called Red Tower. Jo leads the children to Red Tower's castle and they find George has been imprisoned and poor Timmy drugged badly. Jo plays a pivotal role in their escape and finally the police are involved and all's well that ends well. As Julian says at the end, "Everything okay".

Amazon Customer Armaity Patel
5.0 out of 5 stars Brilliant as usual.
Reviewed in India on 25 September 2018
Verified Purchase
Enid Blyton is in a class of her own. I particularly like her classic editions with the origional Eileen Soper illustrations.
Read more
2 people found this helpful
Helpful
Comment Report abuse

Amazon Customer
5.0 out of 5 stars The book is amazing
Reviewed in India on 18 September 2020
Verified Purchase
Worth it an amazing adventurous book should read it is very engaging and intresting hats off to the author awesome.
Read more
One person found this helpful
Helpful
Comment Report abuse

Amazon Customer
5.0 out of 5 stars Go for it
Reviewed in India on 19 January 2020
Verified Purchase
Childhood memories.. It is illustrated as well
Read more

KGG
5.0 out of 5 stars Good reading
Reviewed in the United Kingdom on 29 October 2019
Verified Purchase
Great series of books ... BUT I am not impressed that the last 6 books have to be bought separately as opposed to 2 x 3 book collections. Nope ... definitely not happy. Greedy publishers!!!!
Read more
4 people found this helpful
Report abuse

Jackie M
5.0 out of 5 stars Always a joy.
Reviewed in the United Kingdom on 9 October 2017
Verified Purchase
The Famous Five series must be one of the best for young children. Loved them when I was young. Still as enjoyable 55 years later. It's amazing how well they have stood the test of time. There are a few modernisations such as 5p instead of a shilling and the children occasionally dressing in jeans instead of shorts. This does not detract from the pleasure these stories still bring although I wish the publishers had left well alone.
Read more
4 people found this helpful
Report abuse

Branlew
4.0 out of 5 stars As Good Now as 60 Years Ago
Reviewed in the United Kingdom on 7 July 2020
Verified Purchase
Bought for our grandson. I enjoyed these when I was younger and our grandson is enjoying them also. All in one volume makes it a little unyeildly to handle for small hands
Read more
Report abuse

Kindle Customer
5.0 out of 5 stars Reliving my childhood
Reviewed in the United Kingdom on 12 June 2020
Verified Purchase
Famous Five were firm favourites of mine as a child. Adventures from a simpler time, but I still enjoyed them so many years on.
Read more
Report abuse