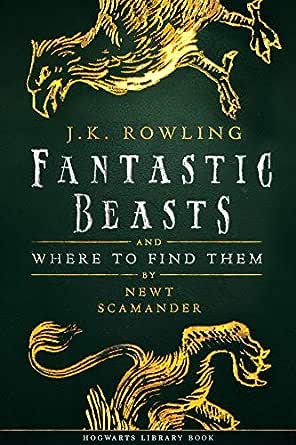 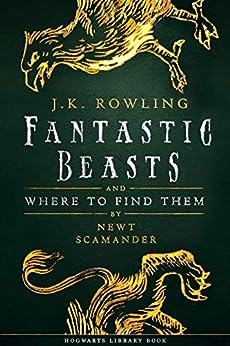 Reviewed with J. K. Rowling's Quidditch through the Ages.

Gr. 4-7. Because this is a "Harry Potterless" year, kids in need of a fix may find it in these two volumes. The conceit is that these are Harry's schoolbooks (Fantastic Beasts, by Newt Scamander; Quidditch, by Kennilworthy Whisp), with margin notes by Harry and pal Ron Weasley. The concept breaks down in the introductions: Professor Dumbledore explains that the books are being offered to muggles (because the proceeds of the books are going to British charity Comic Relief, a disclosure that will raise the eyebrows of any reader who undestands the importance of secrecy in the wizard world. Nevertheless, a lot of effort has gone into making these seem like real textbooks. The jackets look torn and faded, the print is (annoyingly) small, and the information is well detailed. Illustrations are in short supply, and not every fan will want to know this much about Quidditch and imaginary beasts, especially when the text is so hard to read. Buy several copies (the money really does go to charity), but expect a few disappointed readers. REVWR
Copyright © American Library Association. All rights reserved --This text refers to an alternate kindle_edition edition.

Newt Scamander was awarded the Order of Merlin, Second Class, in 1979 in recognition of his services to the study of magical beasts, Magizoology. Now retired, he lives in Dorset with his wife, Porpentina, and their pet Kneazles: Hoppy, Milly, and Mauler.
--This text refers to an alternate kindle_edition edition.

"With these two books, Rowling displays her remarkable imagination and her genius for creating a parallel world through her words." -- USA TODAY

"These amusing, imaginative little paperbacks are required reading for all Potter fans." -- NEWSWEEK

"Harry Potter fans who pride themselves on knowing every minute bit of Hogwarts trivia will devour both books." -- SCHOOL LIBRARY JOURNAL
--This text refers to an alternate kindle_edition edition.
Read more

4.5 out of 5 stars
4.5 out of 5
2,621 global ratings
How are ratings calculated?
To calculate the overall star rating and percentage breakdown by star, we don’t use a simple average. Instead, our system considers things like how recent a review is and if the reviewer bought the item on Amazon. It also analyses reviews to verify trustworthiness.

Blaze
5.0 out of 5 stars Great book!! 😊
Reviewed in India on 25 December 2017
Verified Purchase
It contains all the magical creatures in jk rowling's Wizarding world!!! I enjoyed it thoroughly!! A must buy book for potterheads!!

Protik Mukherjee
5.0 out of 5 stars Another masterpiece from JKR!
Reviewed in India on 28 August 2016
Verified Purchase
It's just great! I'm in love with this book!
You will find Harry, Ron and Hermione's touch in this book! Though the book is not about them, they are everywhere in this book!
However, this book is kind of a textbook of the wizarding world! If you are a true potterhead and love magical creatures, you'll love it!

Domyown
5.0 out of 5 stars This is a work of fiction for muggles!
Reviewed in India on 9 October 2017
Verified Purchase
Written more in the style of an encyclopedia Britannica than a story book, it describes eighty one species of magical creatures. Some we came across in the Potter series and a few more in the movie of the same name. The introductory pages are highly amusing to read. Definitely worth keeping as a reference book to Potter lores.
Read more
18 people found this helpful
Helpful
Comment Report abuse

Subarna
5.0 out of 5 stars Beautiful Book and an Interesting Read
Reviewed in India on 27 April 2018
Verified Purchase
A beautifully illustrated book. Every Harry Potter fan will enjoy reading this book. The only downside is that there aren't images/illustrations for all magical creatures. This makes it difficult to imagine several of the magical beasts.
Read more
5 people found this helpful
Helpful
Comment Report abuse

Shilpa Duraisingh
5.0 out of 5 stars Good buy for Potter-Heads
Reviewed in India on 12 August 2018
Verified Purchase
Among the non-illustrated editions, the US version cover looks most attractive and the potter-head in me couldn't be more happy
Read more

U
5.0 out of 5 stars Five Stars
Reviewed in India on 29 May 2017
Verified Purchase
Absolutely loved the new graphics in this new edition. Really grateful. A must buy.
Read more

Sunitha
5.0 out of 5 stars The best book in my bookshelf 🥳
Reviewed in India on 29 July 2020
Verified Purchase
This the best book jk rowling has ever done...well for me...and it just feels amazing when u see a note behind the cover of the book signed by albus dumbledore.... whenever i read this book, i can actually feel the magic in me😍😍😍😍😍it is sooooooooooooooooooo worth the money...but it is smaller than I expected tho, but this a great buy👍🏻👍🏻👍🏻👍🏻👍🏻👍🏻
Read more
Helpful
Comment Report abuse
See all reviews

Joan
3.0 out of 5 stars Good, but not as good as the original
Reviewed in the United Kingdom on 14 September 2017
Verified Purchase
Cute little text book. I owned the original paper copy that came out for comic releif when I was a child, and that had loads of funny annotations and stuff from Harry and Ron which I did not see on this Kindle edition which was a dissapointment. That was my favourite part of the book the first time I read it.

I'm also pretty sure they missed out some of the beasts! E.g. Boggarts and some others that I can't remember. Although my memory may be failing me, as I no longer have my original copy for comparison.

⭐️Nez⭐️
4.0 out of 5 stars Good for fans!
Reviewed in the United Kingdom on 5 September 2019
Verified Purchase
I bought this for my son as he was mad on all the Harry Potter books and films and he had shown interest in this book.

Personally, when I trawled though it, I thought it looked as dull as dishwater but my son enjoyed it. He said that he like that it was kind of like a dictionary or diary style rather than a book of the movie. If he enjoyed it, then that’s good enough for me.

Fans of HP and the movie will undoubtably enjoy this.

Ffion Owen
5.0 out of 5 stars This is ideal for studies
Reviewed in the United Kingdom on 29 April 2019
Verified Purchase
I purchased the Audiobook & for me there is
Nothing better than having the person who played author of the book Newt from the Muggles Fantastic Beasts series of movies reading about all the creatures the author Newt Salamander had encountered over the years, its must for any Witch or Wizzard studing magical beasts!
(To any muggles, it's a lovely work of fiction read by Eddie written by J.K.Rolling)

Maggie
5.0 out of 5 stars Magical Beasts and Where to Find Them. J.K. Rowling
Reviewed in the United Kingdom on 20 March 2017
Verified Purchase
Excellent book. Needed to complete my collection. It is great to know about the various magical creatures that we read of in all the HP books. Very good value. Very pleased.
Read more
9 people found this helpful
Report abuse

mommabadcrumble
5.0 out of 5 stars a must for Potter fans everywhere
Reviewed in the United Kingdom on 23 January 2016
Verified Purchase
a must for Potter fans everywhere, 100+ pages of interesting (if you're an interested muggle like me!) and amusing 'facts' and anecdotal comments about all the creatures you'll have heard of in the books and seen in the films plus lots, lots more.

It includes scribbles and notations by Harry, Ron and Hermione which add to the fun of it and is kicked off with an introduction by Albus Dumbledore penned in his own inimitable style

produced to benefit Comic Relief with no compromise of the creative and colourfully descriptive writings of JKR, this is a great accompaniment to the harry potter collection of books - JKR is a literary legend of our time I say.