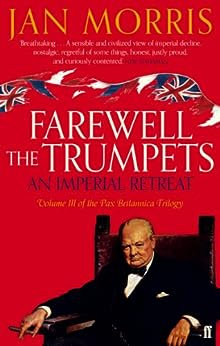 by Jan Morris (Author) Format: Kindle Edition
See all formats and editions
Sorry, there was a problem loading this page. Try again.

Farewell the Trumpets: An Imperial Retreat traces the momentous decline and fall of the greatest of empires - from Queen Victoria's Diamond Jubilee to the death of Winston Churchill in 1965. With characteristic balance, this masterpiece of narrative history describes the long retreat and final dissolution of the British Empire.

The Pax Britannica Trilogy includes Heaven's Command: An Imperial Progress and Pax Britannica: The Climax of an Empire. Together these three works of history trace the dramatic rise and fall of the British Empire, from the accession of Queen Victoria in 1837 to the death of Winston Churchill in 1965. Jan Morris is also world-renowned for her collection of travel writing and reportage, spanning over five decades and including such titles as Venice, Coronation Everest, Hong Kong, Spain, A Writer's World and most recently, Contact!

'The British Empire is fortunate in having found in Morris a chronicler and memorialist who can do it justice. . . Morris writes with inspired gusto, firmly rooted in erudition, which carries the book into the realms of literature.' Sunday Telegraph

'One of our finest writers on Empire - alive to its glory, yet with a beady eye for the corruptions and failures which were at its heart, along with the dreams.' Observer

Farewell the Trumpets: An Imperial Retreat by Jan Morris is a masterpiece of narrative history that traces the gradual demise of the British Empire and culminates with the death of Winston Churchill in 1965. --This text refers to an out of print or unavailable edition of this title.

Jan Morris was born in Somerset in 1926 and received her B.A. in 1951 and her M.A. in 1961, both from Christ Church, Oxford. Dubbed the 'Flaubert of the jet age' by Alistair Cooke, and 'perhaps the best descriptive writer of our time' by Rebecca West, Jan Morris has written studies of Venice, Oxford, Manhattan, Sydney, Hong Kong, Spain and Wales. She is the author of the Pax Brittanica trilogy about the British Empire, two autobiographical books, six volumes of collected travel essays and a novel. --This text refers to an out of print or unavailable edition of this title.

4.6 out of 5 stars
4.6 out of 5
48 global ratings
How are ratings calculated?
To calculate the overall star rating and percentage breakdown by star, we don’t use a simple average. Instead, our system considers things like how recent a review is and if the reviewer bought the item on Amazon. It also analyses reviews to verify trustworthiness.
Top reviews

Gs-trentham
5.0 out of 5 stars A Great Empire Ends and so does a Great Trilogy
Reviewed in the United Kingdom on 8 December 2011
Verified Purchase
Jan Morris's contribution to the history of the British Empire will only be truly measured as future generations turn to a series of books that will surely stand the test of time. This trilogy is a supreme example of how to marry the past with the present, to allow the triumphs and follies behind us to illuminate the way forward for those with eyes to read and independent minds to think. Perhaps sensing this, she writes, "... the post-imperial generation is passing by, and the mass of the British people know little of their lost Empire, and care still less."

And yet within these pages there is so much worth understanding. In Farewell the Trumpets there are great names in the foreground: T E Lawrence, Gandhi, Smuts and Churchill, politicians, statesmen and generals. Lesser mortals, too, for not the least of Morris's gifts is her ability to portray a person in an anecdote, evoke a mood with a poem, reawaken a moment in time with a musty cutting. There is ample humour for Morris loves a good joke. Most of the places of which she writes she has visited, many of the people she has met. And just once, the meticulous, even-handed historian gives way to the proud writer, and then only in a characteristically wry footnote: "The imperturbable Mufti settled after the war in Egypt - where I met him, I cannot resist recording, at the wedding of the King of Libya."

Iso Thringwyn Gade
4.0 out of 5 stars Affectionate, gripping, fascinating ... the hey day of Empire
Reviewed in the United Kingdom on 27 November 2014
Verified Purchase
I had read Pax Britannica (3 volumes, very long) and enjoyed it many years ago. The abridgement is gripping, though it (understandably) focuses on the adventure stories, horrific incidents, and the most colourful of characters. In Britain we are largely ignorant of the astonishing sweep and scope of Empire, and of the way our achievements, delivering the fruits of enlightenment, Christianity and industrial revolution, shaped the modern world. Children are more likely to be taught of the evils of Empire ... Amritsar, famine in Bengal and so on ... but the substantial achievements beggar belief. It comes as a surprise to rediscover how much the Empire was in its early days a matter of private initiative, about which government was usually hostile. Only in this final pompous hey-day did Empire become a sort of state religion, with Victoria its goddess. A great and, unusually, affectionate look through the annals of a period that seems all but incredible now.
Read more
3 people found this helpful
Report abuse

Amazon Customer
5.0 out of 5 stars Brilliantly accessible and entertaining history of British empire, a must-read.
Reviewed in the United Kingdom on 26 October 2019
Verified Purchase
This trilogy should be the set text for all secondary school history teaching; it’s a brilliant account of the British Empire from start to finish which illuminates our nation’s place in the world today. No dry history book this, entirely entertaining and always informative. I can’t recommend it highly enough
Read more
Report abuse

Kindle Customer
4.0 out of 5 stars An inspiring take on the UK Empire
Reviewed in the United Kingdom on 15 September 2014
Verified Purchase
At times this trilogy seems long winded, but if you stick with it, you will be greatly rewarded. The vast array of information and detail is amazing. So much more I now know about the Empire it has been truly enlightening.
Read more
Report abuse
See all reviews