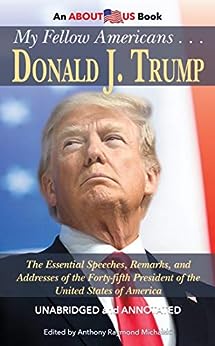 My Fellow Americans . . . Donald J. Trump: The Essential Speeches, Remarks, and Addresses of the Forty-fifth President of the United States of America Kindle Edition

Donald J. Trump burst upon the American political landscape in 2015 with his brash, America-first rhetoric. His up-beat, informal style earned his the sobriquet “The Inspirational President.”

You will discover in this unabridged and annotated collection of President Trump’s most important and pivotal speeches and remarks both the inner-workings and the inner-beliefs of the man who stunned the world to become the forty-fifth president of the United States of America, such as . . .

- Mr. Trump’s presidential bid announcement
- The persuasive “What Have You Got to Lose?” speech to black voters
- President Trump’s four State of the Union addresses
- The inspirational Mount Rushmore speech
- President Trump’s remarks to the UN General Assembly
- And many others.

The ABOUT US book series brings to life the exciting and vibrant history of the United States with classic and inspiring books that celebrate the bravery, audacity, and daring of the men and women who founded and created the nation that is the beacon of freedom to the world. The My Fellow Americans series presents in unabridged and annotated form the policy-defining and personality-revealing orations and speeches of the American presidents for everyone to experience and learn.

Foreword
The president of the United States is the most powerful person in the world. This has been true for a very long time — perhaps from the very beginning. So it is important to know and understand these men who sought and attained this highest office in the land.
And what better way to understand the presidents than through their own words?
About US Books and Kallisti Publishing Inc. is pleased to present to you the first volume of the My Fellow Americans series, a line of books that will present to the ages the important and significant speeches and orations of the presidents of the United States of American.
This inaugural volume showcases America’s “inspirational” president, Donald J. Trump, the billionaire businessman who, rather than taking the traditional route of governor — senator — president, instead leaped straight to the top in a hard-fought race against then-Secretary of State Hillary Rodham Clinton.
Some people think President Trump to be brash. Others think him to be rude, insensitive, and even worse. Yet others still describe him as inspirational and uplifting. What you will discover as you read candidate and President Trump’s speeches is a person who ardently believes in the American Dream, who looks up to heroes, and who sees beyond the horizon to “the best” that is to come. Ultimately, his own words are here so you can make your own decision.
Choosing which speeches to include in this volume presented some difficulty because President Trump often spoke “off-script” and talked extemporaneously. Of course, no volume of a president’s speeches would be complete without his State of the Union addresses; thus, all four are presented here. Remarks to the UN General Assemble are important declarations of foreign policy, so they, too, are all included. That left a lot of speeches through which to sift, and what were chosen were Mr. Trump’s famous presidential bid speech, Candidate Trump’s plea to black voters, President Trump’s Inaugural Address, the inspirational Mount Rushmore speech, and others that highlight President Trump’s policy positions, vision, and goals.
Please enjoy this deep-dive into the mind of Donald J. Trump through his speeches and remarks. And please look forward to the upcoming volumes in the My Fellow Americans series.
So, as the presidents end their speeches, I leave you with a hearty thank you and a strong God bless America!
Anthony Raymond Michalski
Publisher & Editor

Son T. Le
5.0 out of 5 stars Good for everyone
Reviewed in the United States on 6 February 2021
Verified Purchase
Good book
Read more
3 people found this helpful
Report abuse
See all reviews
Back to top
Get to Know Us
Connect with Us
Make Money with Us
Let Us Help You
EnglishChoose a language for shopping.
© 1996-2022, Amazon.com, Inc. or its affiliates