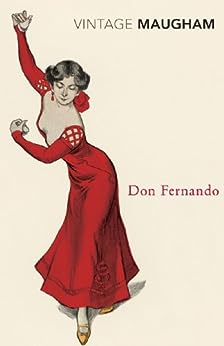 One of the most under-rated writers of last century, Glasgow Herald

He was a superb storyteller - one of the very best in our language - who wrote with a wordly, sardonic understanding of the human condition., Daily Mail --This text refers to the paperback edition.

William Somerset Maugham was born in 1874 and lived in Paris until he was ten. He was educated at King's School, Canterbury, and at Heidelberg University. He spent some time at St. Thomas' Hospital with the idea of practising medicine, but the success of his first novel, Liza of Lambeth, published in 1897, won him over to literature. Of Human Bondage, the first of his masterpieces, came out in 1915, and with the publication in 1919 of The Moon and Sixpence his reputation as a novelist was established. At the same time his fame as a successful playwright and writer was being consolidated with acclaimed productions of various plays and the publication of several short story collections. His other works include travel books, essays, criticism and the autobiographical The Summing Up and A Writer's Notebook. In 1927 Somerset Maugham settled in the South of France and lived there until his death in 1965 --This text refers to the paperback edition.

A paean to Spain's golden age of enormous creative energy, Don Fernando begins with the vivid tale of Loyola's life and conversion, discusses the writings of St Teresa and the paintings of El Greco, and comments with sagacity and wit on such illustrious figures as Cervantes, Luis de Léon, Lope de Vega, Velasquez and the creator of Don Juan. --This text refers to the paperback edition.
Read more

4.3 out of 5 stars
4.3 out of 5
8 global ratings
How are ratings calculated?
To calculate the overall star rating and percentage breakdown by star, we don’t use a simple average. Instead, our system considers things like how recent a review is and if the reviewer bought the item on Amazon. It also analyses reviews to verify trustworthiness.
Top reviews

Tibor Wenger
4.0 out of 5 stars good book, good epedition and price
Reviewed in the United Kingdom on 5 May 2016
Verified Purchase
I like it but I have expected a little bit more from the writer. Unfortunatelly there is no possibility to discuss with him. Tha Amazon's work, price, postage etc. has been corret. I am, satisfied with.
Read more
Report abuse

Baudouin De Witte
5.0 out of 5 stars Spain's Golden Age
Reviewed in Germany on 31 May 2016
Verified Purchase
Maugham description of autors, playwriters, painters, ... who were active during Spain's Golden Age, based on his extensive travels in Spain.
Read more
Report abuse

whj
4.0 out of 5 stars People of Spain
Reviewed in the United States on 6 January 2015
Verified Purchase
Charming and short essays about Spain, its uniqueness, food, literature, art, and eventually the passion and people of Spain. Although there are many books about the same topic and perhaps the same conclusion, I think Maugham makes it extra poignant.
Read more
One person found this helpful
Report abuse
See all reviews
Back to top
Get to Know Us
Connect with Us
Make Money with Us
Let Us Help You
EnglishChoose a language for shopping.
© 1996-2021, Amazon.com, Inc. or its affiliates