Festival Stories: Through the Year and over 2 million other books are available for Amazon Kindle . Learn more
Share <Embed> 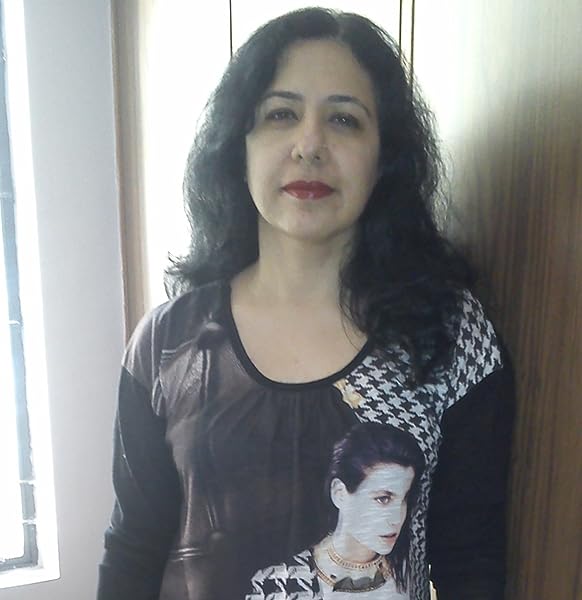 Rachna Chhabria is the author of Lazy Worm Goes on a Journey, The Lion Who Wanted to Sing and Bunny in Search of a Name. Her short story 'Ganesh's Blanket of Stars' won the Special Prize in the Unisun-Reliance TimeOut Writing Competition, 2010-11.

Start reading Festival Stories: Through the Year on your Kindle in under a minute.

4.5 out of 5 stars
4.5 out of 5
63 global ratings
How are ratings calculated?
To calculate the overall star rating and percentage breakdown by star, we don’t use a simple average. Instead, our system considers things like how recent a review is and if the reviewer bought the item on Amazon. It also analyses reviews to verify trustworthiness.

anitha j padmanabha
5.0 out of 5 stars Just adored
Reviewed in India on 14 November 2018
Verified Purchase
Finally someone has presented Indian festivals in a unique way! Through the ages, festivals are a part of our lives and it's nice to read more about them and the stories behind each festival. My daughter loved the book, especially the stories associated with each festival. She adored the characters of Nikhil, Natasha, Dadi and Sarla aunty. A gripping book, quite intriguing. The illustrations are lovely. The nonfiction part is explained well and blends well with the story. The book should be a part of school syllabus. A must read.
Read more
10 people found this helpful
Helpful
Comment Report abuse

A
5.0 out of 5 stars On a trip to India? Make sure you are carrying this with you
Reviewed in India on 17 December 2018
Verified Purchase
This book about all the festivals of India will be cherished by each reader. When I started to read this, I did not have an idea that it will turn out to be such a joyous read but let me assure you it is indeed very engrossing. The way the author, Rachna aunty, weaves the story about the twins adjusting to Indian culture really left me mesmerised. It was as if I am on a tour with them. Also very interesting is the journal entry after each chapter. Hoping Rachna aunty will come up with more such reads.
Best of Luck, Naysa.

Jini
5.0 out of 5 stars Awesome..must buy for young ones
Reviewed in India on 12 October 2019
Verified Purchase
Im so thankful to the author for this lovely compilation of these festivals ..
I m in love with this book..
My 5 yr old just awaits for a festival to be read for her ..good vocab..overall understanding of emotions, words ,things around us,community,all religions . And also how people live in harmony like sarla aunty...and how dadi gives equal imp to all the religions or belief..

VED PRAKASH SAINI
5.0 out of 5 stars Amazing book😍
Reviewed in India on 7 October 2019
Verified Purchase
Rachna di has presented festival in a new and totally different way. The festivals make our life colourful and enthusiastic. They bring people together. They come every year to make us forget all ill-will and communal hatred the festivals strengthen the feeling of oneness too people, without any malice, meet with one another and wish for bright future. I'm totally in love with this book😍 everyone should read it.
Read more
Helpful
Comment Report abuse

Pallavi Parmar
5.0 out of 5 stars Great Read, Awesome Book!
Reviewed in India on 11 November 2018
Verified Purchase
Very well scripted to understand and rejoice our all imp festivals! Am very sure the kids will love it as much as I have, as is a treasure trove of our rich Indian culture depicted elaborately and meaningfully thru the various festivals that come by and we celebrate throughout the year. Think it should be added to schools syllabus for sure....
Read more
One person found this helpful
Helpful
Comment Report abuse

Aurobindo Sahoo
5.0 out of 5 stars Amazing
Reviewed in India on 11 November 2020
Verified Purchase
Amazing book for kids. The festivals are nicely explained through stories. Go for it if you eant your kids to learn about festivals in a fun-filled way.
Read more
One person found this helpful
Helpful
Comment Report abuse

Prashant Kumar
5.0 out of 5 stars Nice short description of festivals
Reviewed in India on 19 August 2019
Verified Purchase
Very informative and useful for both adults and kids.
Read more
One person found this helpful
Helpful
Comment Report abuse
See all reviews

Elizabeth Varadan
5.0 out of 5 stars A delightful introduction to life in India
Reviewed in the United States on 9 January 2019
Verified Purchase
This is a wonderful introduction to religious festivals of India for children of all ages – including adults. My husband is from India, and while I know of some of the festivals, (Pongol and Divali) I learned so much more in this book. I’m a retired teacher, and I wish I had had this book in my 6th grade classroom as supplemental reading when we studied India.

Though informative, the writing isn't pedantic, because the author has used an engaging story frame: Eleven-year-old twins, Natasha and her brother Nikhil, are staying with their paternal grandparents, Dadu and Dadi, in Bangaluru (the local name for Bangalore). Their parents are still in the U. S., winding down jobs and arranging for transfers in a year, while sending the twins ahead, feeling it’s time for them to learn more about their culture first hand. Homesick but intrigued, Natasha begins a journal and Nikhil starts a blog.

Their first festival is Lohri, a Punjabi folk festival and one of the few Indian festivals falling on the same date every year (January 13 on the Gregorian calendar). The book ends with Christmas and a big surprise for the twins. In between are 30 more festivals the author has lovingly researched and described through the eyes of Natasha and Nikhil. They learn about the customs, clothing, and food associated with each festival as they participate. The sweets and snacks served had my mouth watering each time.

Each chapter begins with a little anecdote, often humorous, followed by one of Natasha’s journal entries or Nikhil blog’s posts. Their new world unfolds for the reader as they make friends with other kids, study for exams, play Indian games, go shopping, or stuff themselves with delicious snacks at each festival. The majority of the population practices Hinduism, but Islam, Christianity, Sikhism, Buddhism, and Jainism also have their devotees, and the twins get invited to these festivals and learn traditional stories associated with each.

Chhabria has researched her subject well. She includes the many names for some of the festivals and the gods and goddesses who figure in them. She makes references to the Gregorian calendar months to keep a reader from the west grounded in the time frame when these festivals occur. Many holidays are shared alike (with different names) by Buddhists, Jains, and Hindus. Some are regional, and the twins attend them because they or their grandparents have made friends with characters from these regions who practice these faiths.

The author paints unforgettable characters with deft brushstrokes that don’t belabor descriptions but capture personality. Natasha and Nikhil are endearing eleven-year-olds, and Dadu and Dadi are the grandfather and grandmother everyone would want. The scenes are set so vividly, a reader is plunged into the colors and tastes and excitement of India. This was a lovely book, and I was really sorry to reach the end.

2 people found this helpful
Report abuse
See all reviews
Unlimited FREE fast delivery, video streaming & more
Prime members enjoy unlimited free, fast delivery on eligible items, video streaming, ad-free music, exclusive access to deals & more.
> Get started
Back to top
Get to Know Us
Connect with Us
Make Money with Us
Let Us Help You
EnglishChoose a language for shopping.
© 1996-2020, Amazon.com, Inc. or its affiliates