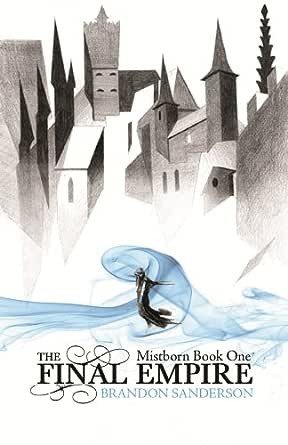 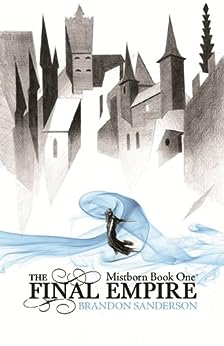 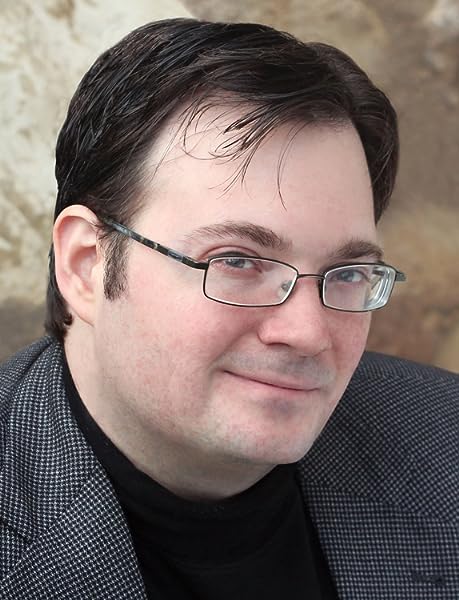 The Sliver of Infinity, the Lord Ruler, is the locus of religious and temporal order in a world in which the skaa are slaves or worse. Half-skaa erstwhile thief Kelsior is the only person to survive and escape the Lord Ruler's most brutal prison, in which, however, he discovered he has the powers of the Mistborn, which are based on the internal "burning" of certain metals, all of which the Mistborn can use, while most others can burn only one. Now Kelsior plans his most daring raid ever, into the center of the palace to discover the secret of the Lord Ruler's power. Beforehand, his band finds the half-skaa orphan Vin in another thieving crew, where she's useful because she brings good luck. She is also Mistborn and, if she can master and learn to trust her powers, will enable Kelsior's crew to infiltrate the nobility and possibly overthrow the status quo. Intrigue, politics, and conspiracies mesh complexly in a world Sanderson realizes in satisfying depth and peoples with impressive characters. Regina Schroeder
Copyright © American Library Association. All rights reserved

“Intrigue, politics, and conspiracies mesh complexly in a world Sanderson realizes in satisfying depth and peoples with impressive characters.”—Booklist on Mistborn
"Enjoyable, adventurous read that. . .should satisfy even easily-bored teens." --Locus on Mistborn
"A fascinating world . . . one that deserves a sequel." --The Washington Post on Mistborn
See all Product description

Autumn Melody
5.0 out of 5 stars Good book
25 May 2019
Verified Purchase
Good book, but bad paper quality. And the font is ugly. The covers are by Sam Green and I wanted them to match my Stormlight Archive editions, but Mistborn's paper quality is shucks.

The line spacing is minimal and the font just assaults your eyes. Better to spent extra and just buy the special edition for Mistborn.

P.S. Buy the 10th anniversary special edition hardcovers. They look amazing and the font is good too. Paper quality is top notch for that.

My first foray into Fantasy genre in two years has been worth the hiatus. After finishing the ASOIAF series and gobbling Tolkien Legendarium, I was finding a hard time trying to find something to read in Fantasy genre that could really perk me up again. Mistborn: Final Empire is the answer.
Though not deep as Tolkien’s World or as complex as Martin’s (and it may change as I move further in the series), the novel stands out for its plotting and clever use of intrigue. “There is always another secret” is the line that appears many times in the book and for good reason. The story unfolds in layers and there are more than one perspective to look at the incidents and character’s motives as the book progresses. By the end of the book, once you think, it’s probably falling in place, the whole story turns onto itself giving a final jolt of exhilaration.

Kalsier and Vin are the standout characters in the book. The character of Vin, especially, is a treat to read. Her growth for a scrawny and scared skaa to the leader of the Uprising under the aegis of Kalsier is inspiring. The two form a bond of progressive appreciation for each other, Kalsier admiring the young protégé’s abilities and Vin admiring Kalsier’s unceasing heroism. The secondary characters are good as well and their backgrounds provide a good supplement to the overall story.

One of the most important aspect of Fantasy genre is World Building. The world is dark and grey, a rather bleak dystopian society. Ash falls from the sky and in the night world is in grips of dark mist that eerily "feels" sentient from the description. Sanderson has done a brilliant job with formulation of Allomancy. Even though there are 10 metals / alloys and their powers a reader has to learn about, they are not difficult to get a hang of. The reader is slowly and steadily pulled into the strange and powerful world of Allomancy rather than bombarded with the concepts at one go.

All in all, a very good read. Looking forward to reading next book in the series.
Read more
2 people found this helpful
Helpful
Comment Report abuse

Befriend books
5.0 out of 5 stars Awesome
6 June 2018
Verified Purchase
It was more like delectable to me. One of the best fantasy and one of the most hyped series out there. A must read for anyone looking for a high fantasy series to binge.

The magic system and the world building is unlike anything.. though I have complaints about few characters.

But the story was amazing. Anyone will fall in love with it.
Read more
One person found this helpful
Helpful
Comment Report abuse

Art
1.0 out of 5 stars the book is of real bad quality......
16 October 2016
Verified Purchase
This review isn't of the content but the quality of the book..
The book seems to be a pirated version of itself, the page quality is really bad and the maps are worse, I really want to read this trilogy but the book doesn't have a genuine look about it hence I'm returning it.
Read more
5 people found this helpful
Helpful
Comment Report abuse

Meghana
3.0 out of 5 stars NOT worth it!! PB edition is better than this.
7 February 2020
Verified Purchase
This is for the quality of the book.
I have mistborn pb boxset and the font is thick and fine. I am not sure why many recommended that this 10th anniversary edition and it is better than PB edition. The font is small and HB is same size as PB.
I would recommend to go with PB only.
Read more
Helpful
Comment Report abuse

akshat shukla
5.0 out of 5 stars Must have.
30 August 2019
Verified Purchase
Bought this paperback version for it's cover,
Would rate 3 🌟 for its quality, cover was beautiful and is really well binded, however paper quality and font is poor.
As for the plot definitely 5 🌟 , amazing journey a bit dark at some places definitely above 15 age group.
Read more

Adns
4.0 out of 5 stars A Really fascinating and intriguing novel
12 August 2018
Verified Purchase
Great characters, great world building and a plot that keeps you hooked all along the way; Although I still wish for the story and characters to be given a bit more time and background to develop. But speaking of the overall book it was awesome and I anticipatingly look forward to the second book in the series.
Read more
Helpful
Comment Report abuse

Mehak
1.0 out of 5 stars Bad Quality
19 January 2018
Verified Purchase
It is obvious from the print that it is a street copy of the book and not the original product.
Read more
4 people found this helpful
Helpful
Comment Report abuse
There are 48 customer reviews and 61 customer ratings.
See all 48 customer reviews
Write a product review

Go to Amazon.com to see all 2,004 reviews 4.6 out of 5 stars
click to open popover
Unlimited FREE fast delivery, video streaming & more
Prime members enjoy unlimited free, fast delivery on eligible items, video streaming, ad-free music, exclusive access to deals & more.
> Get started
Back to top
Get to Know Us
Connect with Us
Make Money with Us
Let Us Help You
EnglishChoose a language for shopping.
© 1996-2020, Amazon.com, Inc. or its affiliates