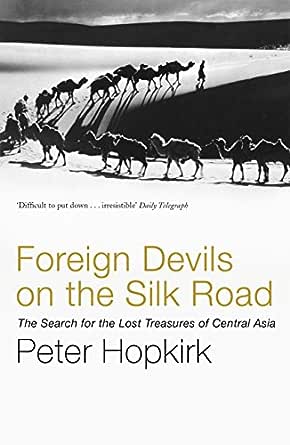 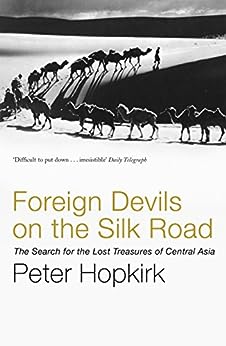 Foreign Devils on the Silk Road: The Search for the Lost Treasures of Central Asia Kindle Edition

A highly readable and elegant book.--Elizabeth Monroe, Times Literary Supplement The story of what this handful of dauntless men from different modern countries endured in order to procure some fragments of Central Asia's lost culture for the museums of their own or an adopted land is told in great style. . . . It is a series of interwoven accounts of high adventure, high stakes, spies, loyalty, treachery, forgery, greed, and occasional magnanimity. It celebrates courage, vision, dedication, and will. Hopkirk has a remarkable cast of characters with whom to work. . . . Every story he touches is totally engrossing.--Washington Post Foreign Devils on the Silk Road will be useful to those seeking a general knowledge of the subject, as well as to those possessing more specific knowledge who require a painless glance at the whole canvas. while some parts of Foreign Devils are well known, others are not. Hopkirk skillfully blends the parts into an engaging whole. I recommend saving the book for a long evening before the fire.--Central Asian Survey --This text refers to the paperback edition.

For five years Chief Reporter of the London Times, Peter Hopkirk now specializes in Middle Eastern and Asiatic affairs, He has traveled widely throughout the world during his twenty-seven years as a reporter and foreign correspondent. --This text refers to the paperback edition.

4.6 out of 5 stars
4.6 out of 5
137 global ratings
How are ratings calculated?
To calculate the overall star rating and percentage breakdown by star, we don’t use a simple average. Instead, our system considers things like how recent a review is and if the reviewer bought the item on Amazon. It also analyses reviews to verify trustworthiness.

Yogesh
5.0 out of 5 stars A piece of History... reading like a riveting bestseller!
Reviewed in India on 26 January 2017
Verified Purchase
This book would be a delight for history lovers. The early 19th century was the age of discovery for many explorers. The silk road was at the edge of the unknown. The author gives a dramatic account of what transpired in this relatively unknown piece of Earth. That the Buddhist and Indian cultural influences extended so far West and North was not known to me.

The author has done a fine job.

Vostok 1
4.0 out of 5 stars Brilliant Title - almost brilliant book
Reviewed in the United Kingdom on 3 August 2018
Verified Purchase
This book is a bit of a sideshow to "The Great Game" and continues the theme of competition between imperial powers in central Asia. This time though competing for archaeological artefacts rather than the countries themselves and because of this there is slightly less of immediate danger and the book is not quite as enthralling as it's big brother of a book.
The main protagonists in the book are explorers, archaeologists, adventurous historians and soldiers with interest in these field who ,in the late 19th century, sough for their countries the artefacts and literature from the early Buddhist mini states that circled the Takla Makan dessert today in western China and a probably but not mentioned in this book some earlier materials. If you knew nothing of this story then I'm sure you would have found this book 5 star but unfortunately this is the second book I have read covering the topic so I didn't get buzz from learning something completely new. Hopkirk does add however plenty of details about the protagonists that I had been unaware of and did broaden my knowledge of this period of history.
This was my 3rd Hopkirk book and the two books I have read previously were gripping so I don't doubt that this book will rate highly for anyone who has read any of his other titles.
Not as long as "The Great Game" but still worth the money.
Read more
Report abuse

Gs-trentham
5.0 out of 5 stars The End of the Road
Reviewed in the United Kingdom on 19 November 2009
Verified Purchase
Peter Hopkirk's books on central Asia have two virtues that are not often found together: they are learned, thoroughly researched works that wrap their scholarship in anecdote and conflict. Foreign Devils takes the author in the steps of a handful of sturdy explorers and antiquarians who, between about 1890 and 1940, ventured into the Taklamakan, Lop Nor and Gobi deserts in search of evidence of the civilisations which once flourished there and are now buried beneath the sand.

Literally thousands of artefacts were discovered by these intrepid individuals and mostly removed to museums in the west, notably but not exclusively to London, St Petersburg and Berlin. The stories of the extreme hardships that accompanied these expeditions are gripping, often awe-inducing. But Hopkirk doesn't neglect the moral issues: the vast majority of the items removed belong - spiritually at least - to China. The question is: had China been left to its own devices would these items have been recovered for the pleasure and education of later generations, or were the explorers saving them from degenerating to dust, never to be seen? In short, were the Foreign Devils saviours or criminals? Even if the reader comes down, as Hopkirk seems to himself, on the side of the former, there remain other serious issues; the British Museum, which displays a mere fragment of its huge collection, comes in for particular opprobrium.

This is more than just a vicarious adventure story; with the romance of the Silk Road that drew Marco Polo and so many questing travellers at an end, the reader will be left with much food for thought.
Read more
26 people found this helpful
Report abuse

S. Smith
5.0 out of 5 stars A Great Read
Reviewed in the United Kingdom on 26 November 2012
Verified Purchase
I'm particulary interested in this area (the Gobi and Taklamakan deserts and surrounding area) so I enjoyed this. The book deals with the various explorers who went to Central Asia to dig up and remove artifacts and objects to put into museums in Germany, the UK, France etc. These items did belong to the Chinese and also should remain in situ to preserve the past? But in such a turbulent area at war with itself, conflicting religions and neglect destroyed those pieces which were left there, so who is right? Its not really right to remove items such as these from cities buried in sand centuries ago, but if you don't retrieve them and put them in museums in controlled atmosphere where they can be seen, nothing is gained either, so its a conflict, but some of the tactics used by the explorers to gain access to manuscripts and then remove them to Europe are controvertial to say the least. That said, these intrepid early explorers went through great personal suffering in hostile areas not designed for human habitation in order to bring these pieces to where they can be seen and they deserve credit for that.
Read more
2 people found this helpful
Report abuse

G.I.Forbes
4.0 out of 5 stars silk road
Reviewed in the United Kingdom on 7 July 2014
Verified Purchase
This is the story of a number of obsessive men,from various countrys, who between 1880-1930 scoured the Taklanmakan area of western China for mauscripts, frescoes,ceramics,statues and other items of interest by excavating the long abandoned buildings,,temples and villages that had been abandoned and covered in sand for 100s of years.
The items taken ended up in museums all over the world but the question remains were the activities of these men acts of looting or the saving of relics that would be destroyed by the environment or the ignorant.
Very well written and a good read.
A 5 star book with 1 star maps -they are apallingly amateurish and useless
Read more
2 people found this helpful
Report abuse

RMCT
5.0 out of 5 stars Rivetting
Reviewed in the United Kingdom on 3 December 2012
Verified Purchase
This is the first of Peter Hopkirk's books that I read. I so enjoyed the reading style that I have since read all his books. Not only the style, but the content is of great interest. Having travelled on the edge of the area, I have developed and interest in central asian history. I knew of Sven Hedin and his travels, but I learnt of so many more characters that have played such an important part in the understanding of the ancient history and culture of the region. The fact that Aurel Stein and others could cart away tons and tons of ancient artifacts is extraordinary. How sad that when it was clear that there was a market for manuscripts and historic things that the sites should be plundered and pillaged, split up for quick money - but that's the way of the world, I suppose.

The book is well written, it flows through in a sequential manner and is easy and compulsive reading. What a great book.
Read more
3 people found this helpful
Report abuse
See all reviews
click to open popover
Unlimited FREE fast delivery, video streaming & more
Prime members enjoy unlimited free, fast delivery on eligible items, video streaming, ad-free music, exclusive access to deals & more.
> Get started
Back to top
Get to Know Us
Connect with Us
Make Money with Us
Let Us Help You
EnglishChoose a language for shopping.
© 1996-2021, Amazon.com, Inc. or its affiliates