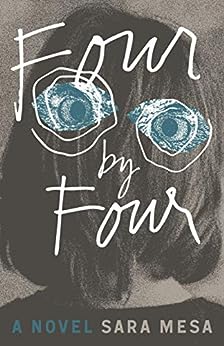 by Sara Mesa (Author), Katie Whittemore (Translator) Format: Kindle Edition
See all formats and editions
Sorry, there was a problem loading this page. Try again.
Set entirely at Wybrany College—a school where the wealthy keep their kids safe from the chaos erupting in the cities—Four by Four is a novel of insinuation and gossip, in which the truth about Wybrany’s “program” is always palpable, but never explicit. The mysteries populating the novel open with the disappearance of one of the “special,” scholarship students. As the first part unfolds, it becomes clear that all is not well in Wybrany, and that something more sordid lurks beneath the surface.

In the second part—a diary written by an imposter who has infiltrated the school as a substitute teacher—the eerie sense of what’s happening in this space removed from society, becomes more acute and potentially sinister.

An exploration of the relationship between the powerful and powerless—and the repetition of these patterns—Mesa’s "sophisticated nightmare" calls to mind great works of gothic literature (think Shirley Jackson) and social thrillers to create a unique, unsettling view of freedom and how a fear of the outside world can create monsters.
Read more
Previous page
Next page

"A meticulously constructed and chilling study of desire and influence."

-- "Kirkus Reviews" --This text refers to the audioCD edition.

Sara Mesa is the author of several works of fiction, including Scar, winner of the Ojo Critico Prize; Four by Four, finalist for the Herralde Prize; An Invisible Fire, winner of the Premio Malaga de Novela; and Cara de Pan. Her works have been translated into more than ten different languages, and she has been widely praised for her concise, sharp writing style.

Timothy Andres Pabon is an actor and Spanish and English voice-over artist/audiobook narrator from Washington D.C. He has over 140 books on Audible.com, one of which was nominated for a 2015 Society of Voice Arts and Sciences Award and another which was awarded an AudioFile Earphones award as part of an ensemble audiobook cast in 2014. His voice-over clients include Gabrielle Giffords, Hillary Clinton, The Sierra Club, NBC, and the 10-episode series Chasing Che on National Geographic. He has been seen on House of Cards seasons 3 and 4 as Mark, a White house press correspondent. He has also been a costar on HBO's acclaimed series The Wire opposite country music legend Steve Earl. As a stage actor he has worked Off-Broadway at the June Havoc Theatre, and his regional credits include Center Stage, the Shakespeare Theatre, Arena Stage, The Hippodrome, Olney Theatre, Rep Stage, and GALA Hispanic Theatre. Tim is a proud father of two children, and a member of AFTRA/SAG and Actor's Equity.

Jennifer Jill Araya has been trained as an opera singer and orchestral cellist, lending a musicality and depth of understanding to her narration that help bring her authors' stories to life. When she's not narrating, Jennifer can be found hiking, biking, running, or generally exploring her home city of Cincinnati with her husband Arturo and their two children.

4.1 out of 5 stars
4.1 out of 5
16 global ratings
How are ratings calculated?
To calculate the overall star rating and percentage breakdown by star, we don’t use a simple average. Instead, our system considers things like how recent a review is and if the reviewer bought the item on Amazon. It also analyses reviews to verify trustworthiness.
Top reviews

Alix P.
4.0 out of 5 stars A complex boarding school gothic
Reviewed in the United States on 30 August 2020
Verified Purchase
3.5 stars

Four by Four is a complex story about a college and the power dynamics that occur there. The school is isolated from society but protected by powerful people. Abuses of all kinds occur, but silence pervades and this state of abuse and violence becomes the status quo at the colich.

Sara Mesa writes sharp sentences and her bluntness provides a nice contrast to the ambiguous and secretive nature of the college. She lays it all out in a devastatingly clear fashion. Overall, this was a disturbing story that illustrates how those in power can control and manipulate the vulnerable to their will. No one dares speak out because once one admits what is happening, they are bringing it into existence and at Wybrany College, everything is undefined and hidden in the shadows.
Read more
2 people found this helpful
Report abuse
See all reviews