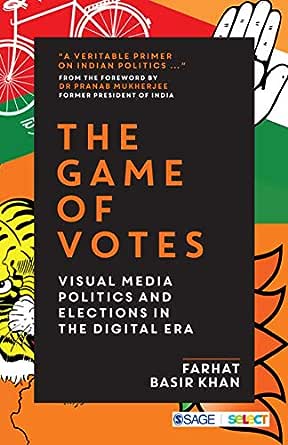 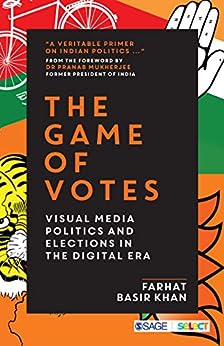 The Game of Votes: Visual Media Politics and Elections in the Digital Era Kindle Edition

‘Professor Farhat Basir Khan in his book The Game of Votes: Visual Media Politics and Elections in the Digital Era takes up a theme not only immensely interesting in itself but also of critical importance to the people of India—the alteration in the way the voter has been approached since the elections of 1952 held on the basis of adult suffrage. Professor Khan makes a very convincing case of how the expanding range of media and PR coups persuade the electorate by obfuscation and false issues, which are loudly raised and constantly proclaimed, and ultimately as he so ably shows, money power now counts the most. The author makes a case that all Indians need to reflect on, and for this he deserves our heartfelt gratitude.’

‘Widely respected, seasoned academic F.B. Khan uses the research skills of a social scientist and the fine eye of a surgeon to piece together The Game of Votes. It is a book whose time is now. Tracing the paradigm shift in Indian elections, from the days of pamphlets and personal contacts to outsourcing to campaign consultants and purchased media slots, the book makes a neat comparison with how democracy and the art of voting government has evolved e, dusted and forgotten.’

‘Professor F.B. Khan’s book is a must-read critical guide for all those interested in understanding the Indian political system. It is an interesting book full of fascinating insights into emerging election campaign management trends in Indian polity, shedding light on the role of modern digital and technology platforms in shaping electoral outcomes in India as well as around the globe. I congratulate Professor F.B. Khan for this original work done in such an easy-to-understand language for the masses.’

‘This book is a must-read for those who wish to understand the manner in which elections are now planned and executed by political parties in the world’s largest democracy.’
(Ambassador Pavan K. Varma, Former Member of Parliament―Rajya Sabh)

“The book highlights the fact that the social media has not just become a daily battleground for fake news but has spread its tentacles around the core of Indian democracy - its free and fair elections." (PTI, 22 September 2019)

“It is filled with amazing insider details about every big campaign in the last forty years. It will have you grinning and shaking your head at some of the strategy that various campaign analysts came up with…Author Farhat Basir Khan provides a fascinating overview of how Indian political campaigns have changed, and how they will likely continue to evolve.”

(The Bookish Elf, 5 December 2019) --This text refers to the paperback edition.

4.7 out of 5 stars
4.7 out of 5
22 global ratings
How are ratings calculated?
To calculate the overall star rating and percentage breakdown by star, we don’t use a simple average. Instead, our system considers things like how recent a review is and if the reviewer bought the item on Amazon. It also analyses reviews to verify trustworthiness.

Ravish
5.0 out of 5 stars Fascinating and Very Informative.
Reviewed in India on 10 September 2019
Verified Purchase
The game of votes is a well researched and an amazingly written book about the things that happen around the world's biggest democracy. The rise and fall of leaders, the techniques used by the heads of states, and the biggest failures Indian elections has ever witnessed, all written in an interesting way. It's a definite page turner.
Read more
One person found this helpful
Helpful
Report abuse

Asif Khan
5.0 out of 5 stars Must read book
Reviewed in India on 31 August 2019
Verified Purchase
Must read book.This is a very informative book regarding the campaigning strategy of different political parties. Really helpful for me as a political science student
Read more
One person found this helpful
Helpful
Report abuse

Sue
5.0 out of 5 stars Must read book for Media Studies and Political Communication
Reviewed in India on 15 August 2019
For a long time had been looking for a book which can comprehensively explain the role of media, visual and political Communication in elections. A lot is usually said about India and democracy but till today hadn't found a simple, yet well researched easy to read book which can trace the evolution of various political parties in India, especially the rise of BJP. This book, written by an expert communicator and a well respected teacher from one of the leading Communication colleges of the country and is both an exhaustive & an interesting read.
What I liked most:
- Original Research
- Good insights with facts and data on the 2014 and 2019 General Elections in India
- Shows a new model of Political Communication and the role that the strategic use of images play in elections today
- For the first time could read and understand how elections and parties have evolved over time in India
- Also found the chapter comparing the impact of social media and fake news globally and locally really interesting along with the details of the rise of regional parties.
Overall would strongly recommend the book not just for future politicians but also for students and teachers of media and communication, political science, and social sciences along with campaign planners and media professionals.
Big thumbs up for being bold and brave and attempting to write on an important and timely topic. Really enjoyed reading it!
Read more
4 people found this helpful
Helpful
Report abuse

Hammad ur Rahman
5.0 out of 5 stars A must read to undertand the strategic use of communication in the Indian election scenario
Reviewed in India on 15 August 2019
Very few books have provided such detailed information about the role of media and communication in the election scenario. The book provides insights, using facts and data, regarding the General Elections of 2014 and 2019, shedding light on the evolution and rise of BJP. It also explained the roles of media and the internet in spreading campaigns, directly or indirectly, through social media and news, and how that benefitted the regional parties as well. I would definitely recommend this book to the students and teachers of mass communication and political and social sciences. The original research provided in the book provides a versatile insight on the past, present, and also the future election scenarios.
Read more
3 people found this helpful
Helpful
Report abuse

Amazon Customer
5.0 out of 5 stars Must read to understand game of Indian election campaign
Reviewed in India on 13 August 2019
A must read book to understand the game of election campaign shift in India from 2014 to 2019. Two major election in which BJP party achieved landslide victory over its rival. How BJP use digital and internet to do the campaign in both the Loksabha election.
Read more
4 people found this helpful
Helpful
Report abuse

Salman Ahmad
5.0 out of 5 stars Very educational and worthy
Reviewed in India on 8 September 2019
Very few books have provided such detailed information about the role of media and communication in the election scenario. A book which can comprehensively explain the role of media, visual and political Communication in elections. A must read book to understand the game of election of 2019. Parliament election in which BJP party achieved landslide victory over its rival.
Read more
One person found this helpful
Helpful
Report abuse

Nupur Singhal
5.0 out of 5 stars Great read!
Reviewed in India on 16 August 2019
A simple, but insightful read on the use of media for political communication in India. The insights are based on original research, backed by data and facts, tracing how political parties and their communications have evolved.
Read more
One person found this helpful
Helpful
Report abuse

Pooja Swaraj
5.0 out of 5 stars A vital title for any person looking to understand Indian politics
Reviewed in India on 15 August 2019
Written wonderfully and a daring topic to write on, it provides a newer perspective to the effect media has on the voting citizen. Must read for amateurs and professionals alike!
Read more
One person found this helpful
Helpful
Report abuse
See all reviews
Back to top
Get to Know Us
Connect with Us
Make Money with Us
Let Us Help You
EnglishChoose a language for shopping.
© 1996-2021, Amazon.com, Inc. or its affiliates