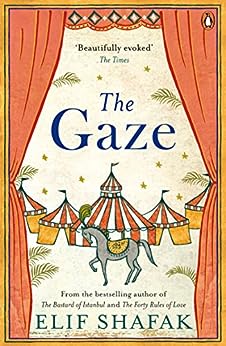 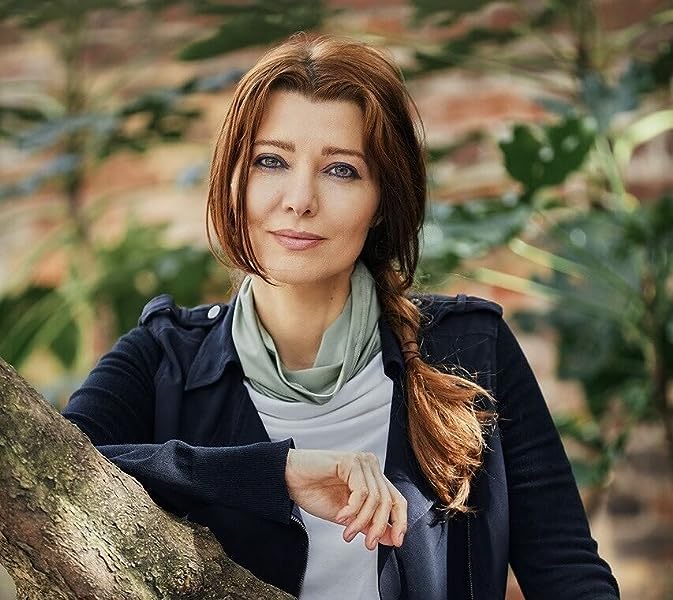 by Elif Shafak (Author) Format: Kindle Edition
See all formats and editions
Sorry, there was a problem loading this page. Try again.

A beautiful and compelling novel, Elif Shafak's The Gaze considers the damage which can be inflicted by our simple desire to look at others

"I didn't say anything. I didn't return his smiles. I looked at him in the wide mirror in front of where I was sitting. He grew uncomfortable and avoided my eyes. I hate those who think fat people are stupid.'

An obese woman and her lover, a dwarf, are sick of being stared at wherever they go, and so decide to reverse roles. The man goes out wearing make up and the woman draws a moustache on her face. But while the woman wants to hide away from the world, the man meets the stares from passers-by head on, compiling his 'Dictionary of Gazes' to explore the boundaries between appearance and reality.

Intertwined with the story of a bizarre freak-show organised in Istanbul in the 1880s, The Gaze considers the damage which can be inflicted by our simple desire to look at others.

Elif Shafak is the acclaimed author of The Bastard of Istanbul and The Forty Rules of Love and is the most widely read female novelist in Turkey. Her work has been translated into more than thirty languages. She is a contributor for The Telegraph, Guardian and the New York Times and her TED talk on the politics of fiction has received 500 000 viewers since July 2010. She is married with two children and divides her time between Istanbul and London.

Beautifully evoked (The Times The Times)

Elif Shafak is the best author to come out of Turkey in the last decade (Orhan Pamuk Orhan Pamuk) --This text refers to an out of print or unavailable edition of this title.

This elegant yet challenging novel explores the damage which can be inflicted by our simple desire to look at others.

An obese woman and her lover, a dwarf, are sick of being stared at wherever they go, and so decide to reverse roles. The man goes out wearing make up and the woman draws a moustache on her face. Intertwined with their story are entries from the mythological Dictionary of Gazes, and tales of a bizarre freak-show in Istanbul in the 1880s.

'Plays with ideas of beauty and ugliness like they're Rubik's cubes.' Helen Oyeyemi, author of The Icarus Girl

Translated from the Turkish by Brendan Freely

Elif Shafak is Assistant Professor in the Department of Near Eastern Studies at the University of Arizona.

Elif Shafak, born 1971 in Strasbourg, spent her teenage years in Spain before returning to Turkey. She is an outstanding name amongst young Turkish authors, and has written four novels and won the Mevlana Prize for the best work in mystical and transcendental literature. She holds a masters degree in Women's Studies and is currently an Assistant professor at Tuscan University, Arizona. --This text refers to an out of print or unavailable edition of this title.
Read more

Elif Shafak is an award-winning British-Turkish novelist. She has published 19 books, 12 of which are novels. She is a bestselling author in many countries around the world and her work has been translated into 55 languages. Her latest novel

The Island of Missing Trees, shortlisted for the Costa Award, RSL Ondaatje Prize and Women’s Prize for Fiction. 10 Minutes 38 Seconds in this Strange World was shortlisted for the Booker Prize and RSL Ondaatje Prize; and was Blackwell’s Book of the Year. The Forty Rules of Love was chosen by BBC among the 100 Novels that Shaped Our World. The Architect’s Apprentice was chosen for the Duchess of Cornwall’s inaugural book club, The Reading Room. Shafak holds a PhD in political science and she has taught at various universities in Turkey, the US and the UK, including St Anne's College, Oxford University, where she is an honorary fellow. She also holds a Doctorate of Humane Letters from Bard College.

Shafak is a Fellow and a Vice President of the Royal Society of Literature. She is a founding member of ECFR (European Council on Foreign Relations). An advocate for women's rights, LGBTQ+ rights and freedom of expression, Shafak is an inspiring public speaker and twice TED Global speaker. Shafak contributes to major publications around the world and she was awarded the medal of Chevalier de l’Ordre des Arts et des Lettres. In 2017 she was chosen by Politico as one of the twelve people “who will give you a much needed lift of the heart”. Shafak has judged numerous literary prizes, including PEN Nabokov prize and she has chaired the Wellcome Prize.

3.8 out of 5 stars
3.8 out of 5
92 global ratings
How are ratings calculated?
To calculate the overall star rating and percentage breakdown by star, we don’t use a simple average. Instead, our system considers things like how recent a review is and if the reviewer bought the item on Amazon. It also analyses reviews to verify trustworthiness.
View Image Gallery

Amazon Customer
1.0 out of 5 stars Fraud !!!
Reviewed in India on 29 July 2020
Duplicate product and too expensive for this amount... complete wastage of 340
Images in this review

Vivek Tejuja
5.0 out of 5 stars In love with her writing.
Reviewed in India 🇮🇳 on 1 February 2021
Verified Purchase
Reading Elif Shafak is a thing of joy. For me at least, and I am guessing for most people as well. I am also one of those who perhaps didn’t enjoy The Forty Rules of Love: A Novel of Rumi as much as her other works, but even then, I will never write her off basis one book. Anyway, back to the point.

I have started an Elif Shafak Reading Project this year – to read one Shafak every month starting with The Gaze, which I reread in January. The Gaze still is my favourite book written by her. It unpacks so much. It is layered with so much – our preconceived notions about people, about the way they look, and how we look in that regard; of how the world views us, and how our desire to look at others takes life spinning in different orbits.

The Gaze is perhaps not Shafak’s popular book, but I absolutely adore it. A story that spans across time and characters that are embroiled in the concept of how they look and what it means to them. An obese woman and her lover, a dwarf, decide to reclaim the streets. They decide to step out in the world that ridicules them. So, they reverse roles. The man wears make-up and dresses like a woman. The woman sports a moustache on her face. This is their story.

There is then the story of Memis that takes place centuries ago – who decides to create a circus of people, and not animals – weird looking people to get others intrigued and curious to come and see them. At the same time, we see Memis’s loneliness and why he does what he does.
In all of this, there is also the Dictionary of The Gazes that the dwarf is working on. It is based on incidents, and movies, and what does the gaze mean at the end of the day.

Shafak’s prose shines on every page. The writing is terrific and for me it was hard to believe (as always) that this was one of her earlier works. The translation by Brendan Freely is on point. At no point do you feel that you are reading a translated work. The book is suggestive. The book is all sorts of unique and perhaps even difficult to get into. The book isn’t linear in its narrative and I love that about it. Read The Gaze to get a sense of Shafak’s writing and the worlds she conjures, as an extension of the world we inhabit.

hamid ravattar
1.0 out of 5 stars Wrong price leads to fraud
Reviewed in India 🇮🇳 on 28 August 2020
Verified Purchase
Mrp showing 800/- discount showing more then 50% but price sticker is having 499/-...fooling the people by this kind of discount fraud...
Read more
Helpful
Report abuse

Simmmmmisharma
1.0 out of 5 stars Fraud !!!
Reviewed in India 🇮🇳 on 29 July 2020
Verified Purchase
Duplicate product and too expensive for this amount... complete wastage of 340
Read more

1.0 out of 5 stars Fraud !!!
By Simmmmmisharma on 29 July 2020
Duplicate product and too expensive for this amount... complete wastage of 340
Images in this review

Amazon Customer
1.0 out of 5 stars Such a great writer, beautiful language but this book is so ...
Reviewed in India 🇮🇳 on 5 September 2017
Verified Purchase
Such a great writer,beautiful language but this book is so utterly disconnected confusing at times almost nauseating. There is not a book better than the Forty rules of love and the Architects apprentice also by Elif Shafak .
Read more
Helpful
Report abuse
See all reviews

maria
2.0 out of 5 stars Difficult to stay with this one.
Reviewed in the United Kingdom 🇬🇧 on 21 July 2021
Verified Purchase
Repetitive and boring.
Read more
Report abuse

Amazon Customer
1.0 out of 5 stars Skip it
Reviewed in the United Kingdom 🇬🇧 on 14 April 2020
Verified Purchase
Skip this one
Read more
Report abuse

Celia Freije
2.0 out of 5 stars Disappointing.
Reviewed in the United Kingdom 🇬🇧 on 4 September 2013
Verified Purchase
I purchased this book because I think 'The Forty Two Rules of Love' was a wonderful story and so well written, but this book must be one of her early works and I could not get past the first two chapters. I found it tedious and dis appointing.
Read more
Report abuse

wey
4.0 out of 5 stars the gaze
Reviewed in the United Kingdom 🇬🇧 on 30 November 2015
Verified Purchase
takes a long time to get into
Read more
Report abuse

Will Adams
4.0 out of 5 stars The Gaze
Reviewed in the United Kingdom 🇬🇧 on 29 May 2013
Verified Purchase
I am enjoying this author more and more. Good to see Turkish authors coming to the fore. Not her greatest but a good read.
Read more
3 people found this helpful
Report abuse
See all reviews
Report an issue
Does this item contain inappropriate content?
Report
Do you believe that this item violates a copyright?
Report
Does this item contain quality or formatting issues?
Report