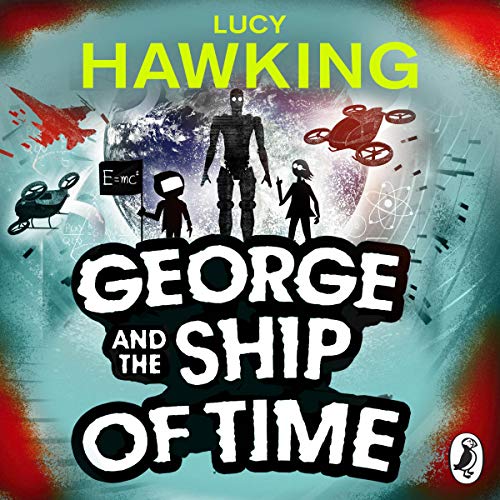 George and the Ship of Time

Penguin presents the audiobook edition of George and the Ship of Time by Lucy Hawking, read by Roy McMillan and Sophie Aldred.

When George finds a way to escape the spacecraft Artemis, where he has been trapped, he is overjoyed. Surely now he can return to Earth.

But when George touches down, he knows immediately that something is wrong. There’s a barren wasteland where his home town used to be, intelligent robots roam the streets and no one will talk to George about the Earth that he used to know. With the help of an unexpected new friend, can George find out what - or who - is behind this terrible new world before it’s too late?

4.6 out of 5 stars
4.6 out of 5
185 global ratings
How are ratings calculated?
To calculate the overall star rating and percentage breakdown by star, we don’t use a simple average. Instead, our system considers things like how recent a review is and if the reviewer bought the item on Amazon. It also analyses reviews to verify trustworthiness.
Top reviews

Arjun
2.0 out of 5 stars Surprisingly Dissapointing
Reviewed in India on 27 February 2021
Verified Purchase
I was really looking forward to this book, especially after the cliffhanger of the last one. It truly felt like this one would be a fitting end to the journey of two young kids. Although it aims for the same magic as its predecessors the plot is rushed, the story and character development nearly ignored, and the ending nearly depressing honestly. The introduction of time travel and execution is all well and good but the plot takes unusual and downright disappointing turns bringing in new characters who aren't that well developed and ignoring the key ones that have come before them.
Overall it's quite a disappointing end.
Read more
One person found this helpful
Helpful
Report abuse

D816 Books
4.0 out of 5 stars continuation
Reviewed in India on 25 March 2019
Verified Purchase
the book was great but by theory of time dialation a faster-than-light travel should led you go back so the next book george and annie can goback in time making a rocket and then they could prevent the rise of dump
Read more
One person found this helpful
Helpful
Report abuse

Amazon Customer
4.0 out of 5 stars Last Book of this series...
Reviewed in India on 3 December 2020
Verified Purchase
Its kind of emotionel this series is finished..but there was little dissopoinment that was favourite character annie didn't appear in full story..but the story is really enjoyable!Good to read
Read more
Helpful
Report abuse

harun rashid
5.0 out of 5 stars Heart ❤️ break 💔
Reviewed in India on 1 September 2020
Verified Purchase
I have finally completed the series!
But I wish the series continued.😭😭😭😭
Read more
Helpful
Report abuse

Meher
5.0 out of 5 stars Great
Reviewed in India on 19 January 2019
Verified Purchase
Outstanding.......just as i expected it to be. I only wished the series were to continue.
Read more
Helpful
Report abuse

xyz
2.0 out of 5 stars Badly written and depressing
Reviewed in the United Kingdom on 23 October 2020
Verified Purchase
A confused book. Author never uses one adjective when four will do and the story is slow and meandering. It needs a severe edit.

Plot is a mashup of The Time Machine, Terminator, and Hunger Games. Felt very unoriginal. The new villain ‘Trellis Dump’ is a caricature of Donald Trump which joke goes completely over the head of children and seemed out of place in the story, but more importantly I don’t want to read about Trump.

Plot is dystopian and rather depressing. George is in the future and has lost his family, who stay lost and we have to assume his parents are dead. His best friend Annie is old. The author ignores all the emotional impact of this in a very unrealistic way, but more importantly my child is upset by such ideas. It is no longer light entertainment. Felt more like a young adult book, except that the hero is so young.

Ending is abrupt and leaves a lot of questions unanswered.

Didn’t think much of the extra sections at the end, especially the defence of war and why war can be good - felt rather creepy and brainwashy in a child’s book.

Regret buying, will attempt to ‘lose’ this before son gets to the end.
Read more
Report abuse

Irina Smalley
1.0 out of 5 stars It is for young children, not for children over 9 years old
Reviewed in the United Kingdom on 24 October 2018
Verified Purchase
I will use my son's words (he is 9): ' Considering the huge size of this book, you would expect it to be very descriptive, but it isn't, it only uses very simple sentences for very young children'.
I tried at least twice to read this book , but stopped for the same reason: its simplicity, contrasting with the expectations raised by the name.
Read more
One person found this helpful
Report abuse

Avi
5.0 out of 5 stars Great read - 8 year old loves it !
Reviewed in the United Kingdom on 2 December 2018
Verified Purchase
Great book - my 8 year old is loving it and learning so many new things about space and time !
Read more
One person found this helpful
Report abuse

Mr Geoffrey Squire
4.0 out of 5 stars Four Stars
Reviewed in the United Kingdom on 25 July 2018
Verified Purchase
Well told little tale enjoyed by both myself and my young granddaughter
Read more
One person found this helpful
Report abuse

Anselmo Medeiros Dias
5.0 out of 5 stars Love it !!
Reviewed in the United Kingdom on 29 September 2018
Verified Purchase
Bought it for my kid but im reading first and love it ! Good fiction adventure mixed with real teaching moments!! Amazing! Have them all already!
Read more
Report abuse
See all reviews
Back to top
Get to Know Us
Connect with Us
Make Money with Us
Let Us Help You
EnglishChoose a language for shopping.
© 1996-2022, Amazon.com, Inc. or its affiliates