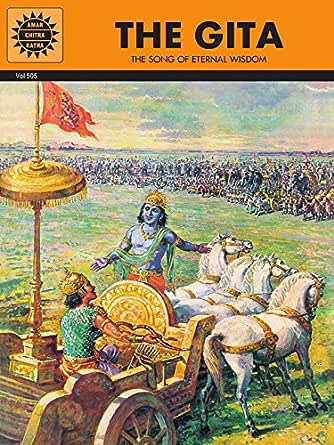 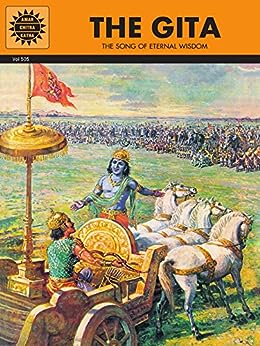 Gita, short for Bhagavad Gita, 'the Divine Song', is a philosophical dialogue in the Mahabharata. The setting is the start of the great war between cousins, the Kauravas and Pandavas. Arjuna, the Pandava hero, finds himself facing his close kin, elders and teachers. The thought of piercing them by his arrows deeply disturbs Arjuna. Distraught, he breaks down, throws away his bow and declares he will not fight. It is Krishna's task to counsel his friend about life as well as his duty as a warrior so that he can fight the war with full moral conviction.

Anant Pai was a pioneer in the Indian comic book industry and he was also an educationist. Disturbed by the lack of knowledge about Indian culture and classical works among youngsters, he decided to start a series of comic books that presented Indian mythology, history, and classics. The books were published by India Book House and marked a milestone in the history of Indian Comic Books with several million copies being sold. Pai later started Rang Rekha Features, a cartoon and comics syndicate and published the popular Tinkle comic digest magazine through this syndicate.

4.5 out of 5 stars
4.5 out of 5
188 customer ratings
By customer groups & interests
Comics, Manga & Graphic Novels
4.8
Amazon Prime members
4.6
Is this helpful?
Yes
No
Thank you for your feedback.

Amazon Customer
5.0 out of 5 stars what a treat!
9 May 2017
Format: PaperbackVerified Purchase
What a excellent book!
Read more

Ashish Srivastava
5.0 out of 5 stars Informative and Enlightening
15 December 2019
Format: Kindle EditionVerified Purchase
A person must not deject himself/herself from his karma but must seek to do his best and seek enlightment to detach his/her worldly desires.

But it's hard to follow these lessons in real life.....

Madhivanan
5.0 out of 5 stars Gita simplified
31 December 2019
Format: Kindle EditionVerified Purchase
This book simplifies Gita and presents to the reader very succinctly, the basics. It is not meant for an extensive study of Gita, of course. I think the book accomplishes what it intends to do.
Read more
Helpful
Comment Report abuse
There are 160 customer reviews and 188 customer ratings.
See all 160 customer reviews
Write a product review

Go to Amazon.com to see all 10 reviews 4.2 out of 5 stars
click to open popover
Unlimited FREE fast delivery, video streaming & more
Prime members enjoy unlimited free, fast delivery on eligible items, video streaming, ad-free music, exclusive access to deals & more.
> Get started
Back to top
Get to Know Us
Connect with Us
Make Money with Us
Let Us Help You
EnglishChoose a language for shopping.
© 1996-2020, Amazon.com, Inc. or its affiliates