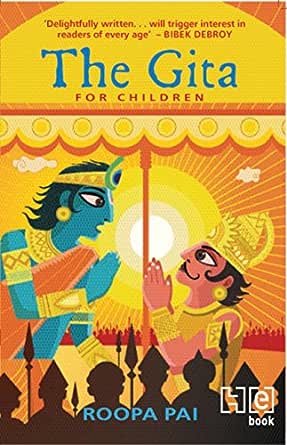 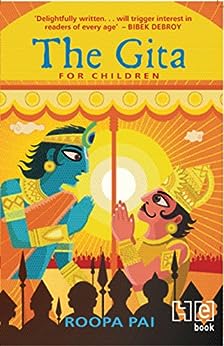 The Vedas and Upanishads for Children Kindle Edition

ROOPA PAI is the author of several books for children, including the much-acclaimed, award-winning bestseller The Gita for Children. Her books, on topics as diverse as history, mathematics, science, economics and sci-fi fantasy, are enjoyed by adults just as much as they are by children.

Of all the Mahavakyas in the Upanishads, her favourite is 'Prajnanam Brahma - Knowledge is God'. --This text refers to an alternate kindle_edition edition.

4.5 out of 5 stars
4.5 out of 5
260 customer ratings
How does Amazon calculate star ratings?
Amazon calculates a product's star ratings based on a machine learned model instead of a raw data average. The model takes into account factors including the age of a rating, whether the ratings are from verified purchasers and factors that establish reviewer trustworthiness.

Andy
5.0 out of 5 stars Not just for children...
Reviewed in India on 26 January 2019
Verified Purchase
I had never thought that book titles could be misleading in such a delightful way. Roopa Pai’s ‘The Vedas and Upanishads for Children’, which is a worthy successor to her bestselling “The Gita for Children”, is a wonderful and enriching read not just for children (as the title suggests), but for adults too!

Here Pai undertakes the onerous task of decoding for young readers some of the oldest, and most significant, of Hindu scriptures: the Vedas - and the Upanishads, which are embedded in the Vedas. This is a significant challenge, considering that these scriptures contain complex philosophical themes and concepts. Pai takes on the challenge in splendid fashion, masterfully combining scholarly research with deep experience of writing for young people. The result is a book that not only provides a high level understanding of these scriptures, but also introduces the reader to many of the key tenets of Vedanta philosophy.

Pai’’s writing style is easy and conversational, and her language, contemporary. Consequently, the book never feels dull or heavy and will likely strike an instant chord with readers of all ages. Further, Pai weaves in many interesting stories, facts and pop-culture references which make the text fun.

This is a wonderful introduction to the Vedas and Upanishads for young readers and their parents. It is easily one of the most accessible books on this somewhat esoteric subject. One of the “must read” books of 2019!
Read more
44 people found this helpful
Helpful
Comment Report abuse

Hayagreev
1.0 out of 5 stars An appeal to the publisher.
Reviewed in India on 16 January 2019
Verified Purchase
****This review is JUST about the awful print quality****

I bought this book as I already read The Gita for children by the same author, which I loved reading. That was a great reading, both content wise and the printed quality wise. But in this book, the content is so good so far, but the print quality is awful. Why you reduce cost in printing? The letters shall be bit more darker. Please correct it in the future prints. Please see the attached picture. Left side is the new book and the other one is The Gita.

About the writing, I would say 5 stars would not be enough. It is not just for children. I am a father of two and I love it.
Read more

Tara
5.0 out of 5 stars Brilliant contemporary representation of ancient texts
Reviewed in India on 24 January 2019
Verified Purchase
To be able to read complex tomes, absorb their essence, and render it in an accessible manner that is appealing and relevant to an audience that is encountering the ideas for the first time is practically an impossible task that Roopa Pai achieves with a spontaneity that I can only attribute to sadhana in previous lives, not just this one.

I am amazed by the insight that her writing of the Vedas and Upanishads reveals. For example, take the introductory preface, Before We Begin. In her astute categorisation of which kind of reader you may be - the agree-r, the disagree-r, or the one sitting on the fence, and the response of the sages to each (which is equal parts welcoming, thought-provoking and stimulating), she has defined the completely open, non-judgmental, non-didactic nature of dialogue in the Upanishads.

This sets a general background to these texts that can otherwise be utterly misinterpreted in different political contexts. The openness and universal appeal of these texts emerges powerfully in Roopa's telling, and is a great service she has rendered to all of us, adults and children in the present, and to future generations. A service to our heritage and to humanity that involves 'roadmaps' and keys to living joyfully and in harmony.
Read more
21 people found this helpful
Helpful
Comment Report abuse

Navin
2.0 out of 5 stars Too much hype, not much depth!
Reviewed in India on 6 August 2015
Verified Purchase
I would have thought a book of this kind, simply told, would be an asset. However, was deeply disappointed at the flippant way the author has tackled the great epic. No doubt the information is there, but I also felt a tinge of mockery; the very casual way it has been rendered, as if two giggly teenagers are narrating the story to another group of teenagers. Disappointed!
Read more
29 people found this helpful
Helpful
Comment Report abuse

priya
4.0 out of 5 stars Simple language but bad quality paper.
Reviewed in India on 9 February 2019
Verified Purchase
Great book to read for people above 15 years but the print quality in extremely bad considering it's a reputed printing organization
Read more

Jai
2.0 out of 5 stars Good intent. Poor execution.
Reviewed in India on 7 March 2020
Verified Purchase
The tone of the book is very flippant and sarcastic especially when it talks about parents. It seems like a misguided attempt to be "cool" and appeal to a young audience. But its an unfortunate execution of a very good intent (which is what prompted us to buy it in the first place).

My children themselves were uncomfortable with some of the language and tone and esp. questioned why the author refers to parents in such a degrading manner. And it keeps coming page after page right from chapter one.

It's now sitting around unfinished and is destined for the 'raddiwallah'. We don't even want to donate this to anyone.
Read more
2 people found this helpful
Helpful
Comment Report abuse

ASHISH
1.0 out of 5 stars Great injustice to Indian heritage.
Reviewed in India on 13 January 2020
Verified Purchase
It is waste of money and the author continues to peddle the same lies which Max Mueller and others of his ilk used to do in their times. Very unfortunate that instead of conducting research and trying to find the truth so called experts just sit in their AC rooms and just repeat what the white colonists propogated who had a single agenda of destroying Indian heritage.
Read more
2 people found this helpful
Helpful
Comment Report abuse
See all reviews from India

Mina P.
4.0 out of 5 stars Good alternative
Reviewed in the United Kingdom on 11 May 2020
Verified Purchase
I am not a kid but read it because of an essay I have to write for the Bhagavad Gita. I will admit that I really enjoy it's simplicity! Great idea and attempt.
Read more
Helpful
Sending feedback...
Thank you for your feedback.
Sorry, we failed to record your vote. Please try again
Report abuse

AHWappat
5.0 out of 5 stars Not just for children
Reviewed in the United Kingdom on 1 March 2020
Verified Purchase
Loving this. I’m a Religious Studies teacher and this book is giving me so many ideas of how to make the scriptures accessible for young people. Definitely suitable for adults as well as older children.
Read more
Helpful
Sending feedback...
Thank you for your feedback.
Sorry, we failed to record your vote. Please try again
Report abuse

Kiran Vicr
5.0 out of 5 stars Finally it makes sense!
Reviewed in the United Kingdom on 28 June 2018
Verified Purchase
This book is without a doubt the best entry point to understanding the Gita for both children and adults. It has made the knowledge so accessible and easy to digest and for that kudos to the author. To you I say, thank you and I hope you work on more such books/themes in the future.
Read more
Helpful
Sending feedback...
Thank you for your feedback.
Sorry, we failed to record your vote. Please try again
Report abuse

Jack
5.0 out of 5 stars Excellent introduction to V&U
Reviewed in the United Kingdom on 19 April 2020
Verified Purchase
All the wisdom of the ancient sages condensed in a beautifully written book. I strongly recommend for children and adults alike.
Read more
Helpful
Sending feedback...
Thank you for your feedback.
Sorry, we failed to record your vote. Please try again
Report abuse

AJB
5.0 out of 5 stars Aha!
Reviewed in the United Kingdom on 17 January 2019
Verified Purchase
Some things need to be experienced and not explained!
To fully appreciate the greatness of this book one needs to simply dive into it!
Read more
Helpful
Sending feedback...
Thank you for your feedback.
Sorry, we failed to record your vote. Please try again
Report abuse
Load more international reviews

MR MANISH CHEBBI
4.0 out of 5 stars Modern and topical
Reviewed in the United Kingdom on 26 April 2019
Verified Purchase
Easy to understand but did not dilute the message, ideal for 10-14 year olds
Read more
Helpful
Sending feedback...
Thank you for your feedback.
Sorry, we failed to record your vote. Please try again
Report abuse

M.Franke
5.0 out of 5 stars Wonderful
Reviewed in Germany on 12 January 2018
Verified Purchase
Very well written not only for children also for adults, very philosophical but in understandable words. Going to read it again !
Read more
Helpful
Sending feedback...
Thank you for your feedback.
Sorry, we failed to record your vote. Please try again
Report abuse
Translate review to English

Raj Choudhury
5.0 out of 5 stars Bliss
Reviewed in France on 16 August 2015
Verified Purchase
The Gita has all the answers. Feel fortunate to finally discover it through this wonderful book from Roopa Pai. Thank You. OM TAT SAT.
Read more
Helpful
Sending feedback...
Thank you for your feedback.
Sorry, we failed to record your vote. Please try again
Report abuse
Load more international reviews

Marutheesh Krishnamurthy
5.0 out of 5 stars Excellent
Reviewed in the United States on 26 October 2019
Verified Purchase
Excellent for both children and grownups, alike. Thank you for excellent books and pray many many more are published soon.
Read more
2 people found this helpful
Helpful
Sending feedback...
Thank you for your feedback.
Sorry, we failed to record your vote. Please try again
Report abuse