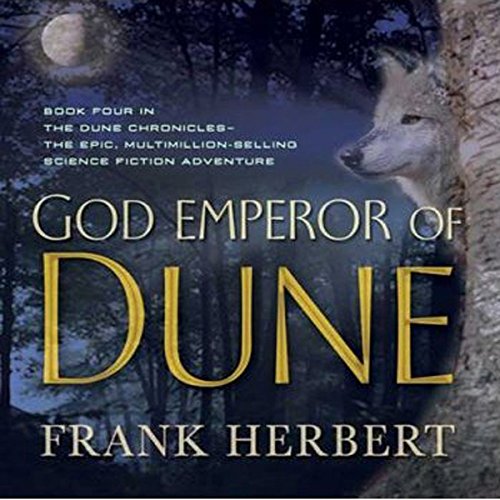 Frank Herbert (Author), Simon Vance (Narrator), Macmillan Audio (Publisher) & 0 More
4.5 out of 5 stars 5,500 ratings
See all formats and editions
Sorry, there was a problem loading this page. Try again.
More than 3,000 years have passed since the first events recorded in Dune. Only one link survives with those tumultuous times: the grotesque figure of Leto Atreides, son of the prophet Paul Muad'Dib, and now the virtually immortal God Emperor of Dune. He alone understands the future, and he knows with a terrible certainty that the evolution of his race is at an end unless he can breed new qualities into his species.

But to achieve his final victory, Leto Atreides must also bring about his own downfall.

4.5 out of 5 stars
4.5 out of 5
5,500 global ratings
How are ratings calculated?
To calculate the overall star rating and percentage breakdown by star, we don’t use a simple average. Instead, our system considers things like how recent a review is and if the reviewer bought the item on Amazon. It also analyses reviews to verify trustworthiness.
Top reviews

Anubhav
2.0 out of 5 stars Product quality review
Reviewed in India 🇮🇳 on 31 July 2021
Verified Purchase
Very poor quality pages and they are very very thin. The paper texture feels cheap. But the pages are more white than the other Dune books.
I paid Rs. 666 for the paperback version and the book's quality is worse than the Dune (book 1) mass market paperback which costs around Rs. 300 only.
Read more
2 people found this helpful
Helpful
Report abuse

aniket
5.0 out of 5 stars Important part of dune chronicles
Reviewed in India 🇮🇳 on 30 July 2018
Verified Purchase
I am not a seasoned science fiction reader, but the imagination of frank Herbert takes into a different world. The narration of this book is also beautiful although I preferred the format dune Messiah this is just another monument of science fiction.
Read more
One person found this helpful
Helpful
Report abuse
See all reviews

C Franks
2.0 out of 5 stars I wish he had left it at Dune
Reviewed in the United Kingdom 🇬🇧 on 24 August 2021
Verified Purchase
After many years I have revisited the Dune series and started to re-read them. Dune remains a classic, the following 2 are not as good but worth a read, but by the forth novel, it’s beginning to get boring. For me the principal problem is that the characters are devoid of any sense of humour; in the case of the Atreides family supremely arrogant, and I have got to the point that I do not like them or care what happens to them. Paul’s son Leto is the worst by far. Also, the action by now has practically ground to a halt, instead you get long drawn out conversations, which I think are supposed to be intricate, clever and revealing, but leave me cold. The thing about great art is that you should know when to stop. If Frank Herbert had stopped at Dune, that would have been great.
Read more
8 people found this helpful
Report abuse

Ventura Angelo
2.0 out of 5 stars Tedious and implausible
Reviewed in the United Kingdom 🇬🇧 on 22 October 2020
Verified Purchase
The first three Dune books were great, This wass all about a creepy human-worm chimera eternally brooding , organizing his own overthrow between a Duncan Idaho's ghola's unsuccessful killing attempt and the next. How could humanity let himself be oppressed by this tyrant for 3000 years? How could things all remain the same all those centuries? I advise stopping at Children of Dune. Afterwards, the series becomes boring and uninteresting.
Read more
6 people found this helpful
Report abuse

Tahmim Miah
1.0 out of 5 stars Misleading
Reviewed in the United Kingdom 🇬🇧 on 13 March 2022
Verified Purchase
I was lead to believe I was buying paperback and was excited to read. So much so, I had bought the whole series. After a few days I was worried why it still had not come since amazon's standards very high with delivery dates. I put those worries aside faulting it to premature excitement and anxiety. I decided I would read other material that is lying around in my room. After flicking through last pages of my unread list of books I needed to read something else.

All of a sudden I remembered I had ordered dune and has not still came through. Initially had thought it was delivered to one of the neighbors. So, I checked my account and it says I have already got the series and its in kindle edition. Now I got nothing against digital books but, for me I cannot get invested in story that is digital. I know I would not have made such a purchase.

My point and reason for one star is the misleading UI when it comes to purchasing books on amazon. I am unable to get a refund even though I have not downloaded any of the books. I usually purchase books from waterstone however, I wanted to read dune as quick as possible and amazon do very fast delivery. I should be able to refund a digital copy of something it is in the digital still sealed and untouched as I have not downloaded it.
Read more
2 people found this helpful
Report abuse

bigredni
5.0 out of 5 stars Another fascinating story
Reviewed in the United Kingdom 🇬🇧 on 27 February 2022
Verified Purchase
I will not lie. I find these hard to read. I love the story and the fascinating world building and deep characters.. but my eyes glaze over long passages as the characters ramble on about some deep reflection or holy jihad. I wish i had the brain to understand what in the hell half of it meant.. but i dont. Still i can appreciate the over all story and i absolutely loved the original Dune trilogy for its overall story and i cannot wait to continue reading this trilogy
Read more
2 people found this helpful
Report abuse

Rajiv S.
4.0 out of 5 stars Another reminder of why the Dune series is highly regarded.
Reviewed in the United Kingdom 🇬🇧 on 12 June 2021
Verified Purchase
I just admit it was difficult to appreciate at first as it’s set so long after the dune trilogy. The world and characters seem alien but the more you read the more you start to appreciate it as a stand-alone piece of work.

Leto is such an complex character and so far removed from the young boy in children of Dune. Tyrant, dictator, saviour, lover, monster and still yet still human.
Read more
3 people found this helpful
Report abuse
See all reviews