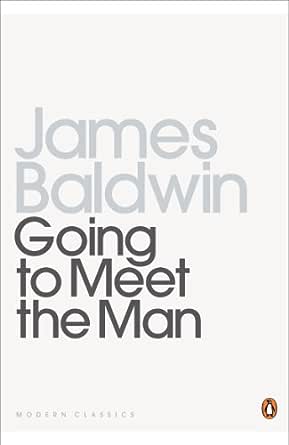 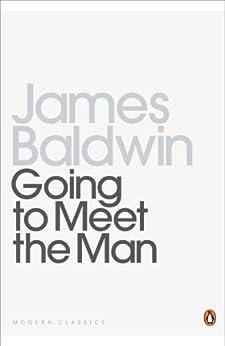 "There's no way not to suffer. But you try all kinds of ways to keep from drowning in it." The men and women in these eight short fictions grasp this truth on an elemental level, and their stories, as told by James Baldwin, detail the ingenious and often desperate ways in which they try to keep their head above water. It may be the heroin that a down-and-out jazz pianist uses to face the terror of pouring his life into an inanimate instrument. It may be the brittle piety of a father who can never forgive his son for his illegitimacy. Or it may be the screen of bigotry that a redneck deputy has raised to blunt the awful childhood memory of the day his parents took him to watch a black man being murdered by a gleeful mob.

By turns haunting, heartbreaking, and horrifying--and informed throughout by Baldwin's uncanny knowledge of the wounds racism has left in both its victims and its perpetrators--Going to Meet the Man is a major work by one of our most important writers. --This text refers to an alternate kindle_edition edition.

''Dion Graham's reading requires him to master an array of voices: hellfire-preaching ministers, deliciously profane Harlem locals,…kittenish women. Graham ranges from tremulous exertion to sudden flashes of rage, his reading flecked by an exhaustion that creeps in at the margins of Baldwin's prose. Baldwin's protagonists are weary of a world that allows them no respite from racism and hatred, and Graham echoes that weariness, his voice hushed and low, its register reflecting their struggle to survive.'' --Publishers Weekly

''Timeless in its treatment of youthful innocence, prejudice, addiction, loneliness, fear, and human suffering…Dion Graham is masterly in his rendering of the vast array of characters in these eight disparate tales. Highly recommended.'' --Library Journal

''All of these tales have an undeniable urgency, power, and anger…Symphonic in structure, mixing religious and sexual motifs, encompassing various shades of characters and situations…memorable in every sense; funny, sad, colorful, it is a triumphant performance.'' --Kirkus Reviews

''Many of these situations don't occur in quite the same ways now, but narrator Dion Graham makes them timely and universally human…a heartbreaking performance…Graham's reading pulls the listener back to a time when [these stories] were fresh, raw wounds.'' --AudioFile --This text refers to the audioCD edition.

James Baldwin (1924-1987) was educated in New York. He is the author of more than twenty works of fiction and nonfiction, including Go Tell It on the Mountain, Notes of a Native Son, Another Country, and Blues for Mister Charlie.
--This text refers to the audioCD edition.

'Few, it seems to me, have driven their words with such passion' Guardian

How our earliest experiences can shape our destiny is the theme that runs like a thread of revelation through these extraordinary stories. They explore the roots of love, of murder and of racial conflict, from the child in 'The Rockpile' who can never be forgiven by his God-fearing father for his illegitimacy to the loneliness of a young black girl in love with a white man who, she knows, will leave her in 'Come Out of the Wilderness' and the horrifying story of the initiation of a racist as a man remembers his parents taking him to see the mutilation and murder of a black man in 'Going to Meet the Man'. In them Baldwin unlocks the concepts of history and prejudice and probes beneath the skin to the soul.

4.8 out of 5 stars
4.8 out of 5
268 global ratings
How are ratings calculated?
To calculate the overall star rating and percentage breakdown by star, we don’t use a simple average. Instead, our system considers things like how recent a review is and if the reviewer bought the item on Amazon. It also analyses reviews to verify trustworthiness.

HappyCustomer
5.0 out of 5 stars A truly great writer, still wholly relevant today.
Reviewed in the United Kingdom on 4 June 2020
Verified Purchase
I generally prefer reading novels to collections of short stories, but James Baldwin is such an incredible writer than I had to read this, having loved everything else of his I have read. It didn't disappoint. Hard to review, but I suppose it's a gritty, warts and all portrayal of humanity and the inner hopes, dreams and disappointments of "ordinary people." Racism is a prominent theme in Baldwin's work and, sadly, every bit as relevant today as it was when he was writing. Baldwin's genius as a writer is in creating characters which feel like real people you have actually encountered. I sometimes catch myself wondering about them and what happened to them as though they actually existed!
This isn't my favourite work by this writer, but still great and I would recommend.
Read more
2 people found this helpful
Report abuse

The book is a collection of short stories: The Rockpile, The Outing, The Man Child, Previous condition, Sonny's blues, Come out of the Wilderness and, of course, Going to Meet the Man. These stories explore the nuances of human condition: love, racism and murder.

My favourite stories are This Morning, This Evening, So Soon and Going to Meet the Man. In `This Morning', a successful Paris-based Black American musician/actor plans to return to the US with his Swedish wife, Harriet, and their mixed race son, Paul. As our musician comes to terms with his return to the Old Country, his fears (and history) now become apparent; Europe was not just an escape from a stifling American form of racism but his redemption. He had become a man in every sense of the word in Europe. Alas, this was an opportunity that was denied him in the US. However, he wistfully contemplates his decision and decides to return to the US all the same.

Going to Meet the Man was simply haunting. It is set sometime in the 1950's in the American South. The Civil Rights movement is in full swing and Black protesters engage in a sit-in and singing session at the jailhouse, where one of their lot has been arrested. The Deputy Sheriff, Jesse, handles the situation the only way that he knows how to: with extreme violence. Alas, violence does not work. The Sheriff then remembers an event from his childhood: the lynching of a black man.
Baldwin does not describe the circumstances that led to the lynching. Instead, his description of the macabre, barbarous, dark lynching `party' itself is laid out in exquisite detail. Young Jesse thought that the black body hanging from the tree was the `most beautiful and most terrible' thing that he had ever seen. One sees the lynching through the eyes of an eight-year old boy. It is fascinating, wicked, twisted and somehow captivating. The lynching is over almost as soon as it had begun. The folks retire and have a picnic after the event. What a bizarre affair! All I could think about when reading this story was the song, Strange Fruit by Billie Holliday.

Going to Meet the Man is the first Baldwin novel that I have read. He, like Langston Hughes, my favourite American author, uses the metaphor of escape to Europe (to France) in order to discover oneself. Yes, Europe was not perfect but the Old World had done away with lynching by the 1930's. Baldwin is a master story teller. In Going to Meet the Man, while he uses words to paint a most haunting portrait of man at his worst yet there is no judgment. The reader has to distil his own meaning from the work. At the end of the story, it was not clear to me who the victim was - the black man who was lynched or the child who was made to witness and internalise such a horrible event.
Read more
7 people found this helpful
Report abuse

odette levy
4.0 out of 5 stars Must read!
Reviewed in the United Kingdom on 19 July 2017
Verified Purchase
Going to meet the man was written with such care and attention it allowed the reader to obtain a better understanding what it is to be judge by the colour of their skin without knowing the individual as a person. It left no doubt how much racial prejudice affected the main characters on so many levels. Very well written.
Read more
One person found this helpful
Report abuse

Siobhan Howard
5.0 out of 5 stars Stunning!
Reviewed in the United Kingdom on 27 December 2017
Verified Purchase
Some of the best writing I have ever read, each story is a gem, so nourishing and thought provoking.
Read more
2 people found this helpful
Report abuse

J M LEVY
5.0 out of 5 stars Can't wait to re-read it.
Reviewed in the United Kingdom on 17 March 2017
Verified Purchase
I first read this book 35 years ago. I had a hard copy but got rid of it when I downsized. James Baldwin is one of my favourite authors and I'm happy I now have an electronic copy, bought at a decent price also.
Read more
Report abuse
See all reviews
click to open popover
Unlimited FREE fast delivery, video streaming & more
Prime members enjoy unlimited free, fast delivery on eligible items, video streaming, ad-free music, exclusive access to deals & more.
> Get started
Back to top
Get to Know Us
Connect with Us
Make Money with Us
Let Us Help You
EnglishChoose a language for shopping.
© 1996-2021, Amazon.com, Inc. or its affiliates