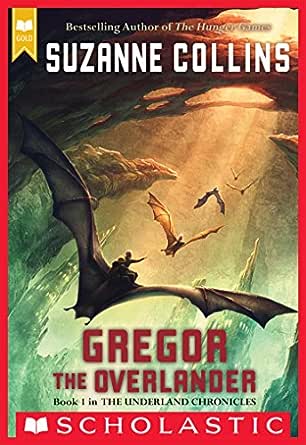 Subtotal ₹
Cart
View your cart
To add this eBook, remove any 1 eBook from your cart or buy the 25 eBooks present in the eBook cart
Review items in your cart
There was a problem adding this eBook to the cart
Kindle Edition
₹ 185.25 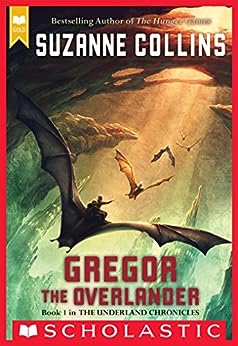 *Starred Review* Gr. 4-7. What if Alice fell down an air vent in a New York City apartment building instead of down a rabbit hole? Collins considers a similar possibility in her exceptional debut novel, a well-written, fast-moving, action-packed fantasy. Eleven-year-old Gregor expects a long, boring summer of baby-sitting his two-year-old sister, Boots, and his senile grandmother. Distracted with thoughts about his father, who disappeared three years ago, Gregor belatedly notices that Boots has crawled into an air vent in the laundry room. He dives in after her, and the two are sucked downward into the Underland, a fantastic subterranean world of translucent-skinned, violet-eyed humans, and giant talking cockroaches, bats, spiders, and rats. Eventually, the terrified Gregor is transformed into a warrior hero who leads a successful battle against an army of invading rats and discovers his father, who has long been held prisoner by the enemy. Collins creates a fascinating, vivid, highly original world and a superb story to go along with it, and Gregor is endearing as a caring, responsible big brother who rises triumphantly to every challenge. This is sure to be a solid hit with young fantasy fans. Ed Sullivan
Copyright © American Library Association. All rights reserved --This text refers to an alternate kindle_edition edition.

Suzanne Collin's debut novel, Gregor the Overlander, the first book in The Underland Chronicles, received wide praise both in the United States and abroad. The series has been a New York Times bestseller and received numerous accolades. Also a writer for children's television, Suzanne lives with her family in Connecticut. --This text refers to an alternate kindle_edition edition.

Thinking one day about Alice in Wonderland, author Suzanne Collins was struck by how rural the setting must seem to kids who, like her own, lived in the city. In New York City, you're much more likely to fall down a manhole than a rabbit hole and, if you do, you're not going to find a tea party. What you might find...? Collins's musings led to the creation of The Underland Chronicles. "I liked the fact that this world was teeming under New York City and nobody was aware of it. That you could be going along preoccupied with your own problems and then whoosh! You take a wrong turn in your laundry room and suddenly a giant cockroach is right in your face. No magic, no space or time travel, there's just a ticket to another world behind your clothes dryer," Collins says. --This text refers to an alternate kindle_edition edition.

4.6 out of 5 stars
4.6 out of 5
1,440 global ratings
How are ratings calculated?
To calculate the overall star rating and percentage breakdown by star, we don’t use a simple average. Instead, our system considers things like how recent a review is and if the reviewer bought the item on Amazon. It also analyses reviews to verify trustworthiness.

shreya
4.0 out of 5 stars Go For It
Reviewed in India on 20 January 2018
Verified Purchase
it was a very good read.I am a huge fan of hunger games and thought to give it a try.The paper quality was a little meh otherwise I would recommend It.
Read more
Helpful
Report abuse

Anant Pandit
5.0 out of 5 stars Awesome!!!
Reviewed in India on 20 December 2017
This book series is execeding my expections evn though i did not read it as i heard from a friend the book is about a boy who to the underworld to save many lives and find his father as a natujral instinct of a child i widely recommand you to read this book!!!
Read more
Helpful
Report abuse
See all reviews

D.M. Cain
5.0 out of 5 stars Great book for both kids and adults
Reviewed in the United Kingdom on 6 June 2014
Verified Purchase
As a lover of The Hunger Games, I decided to check out Collins' other work. This series totally blew me away. Despite being pitched towards younger children (perfect for 9-10 year olds) it has all the depth and integrity of The Hunger Games and has even better character development. The plots (in all five books) are thrilling and action-packed, but there are some meaty, though-provoking scenes and a whole range of ethical and moral dilemmas are raised. The characters are brilliantly described (particularly Ripred who I am very fond of) and I simply couldn't put the book down until I had completed their journeys. As with The Hunger Games, Collins doesn't shy away from killing main characters and this gives the stories a depth and maturity that other children's books simply do not tackle. I read the entire series from start to finish in a few weeks and was blown away. As I am a teacher of 8-10 year old children, I then took the books into the classroom and read them to my class. I've never had a reaction like it. Every single child in the class bought the entire series, would read enthusiastically when before they had struggled and would burst into class every morning simply to tell me what had happened in the last chapter.

I adore The Hunger Games but I think I would say that Gregor the Overlander is even better. Simply fantastic.

An Avid Reader
5.0 out of 5 stars Brilliant!
Reviewed in the United Kingdom on 4 April 2015
Verified Purchase
I loved the Hunger Games and was interested to see what other books Suzanne Collins had written. Initially I was put off buying this book as it seemed to be aimed at a much younger audience, however I took a chance and am so pleased that I did! This book was excellent! Beautifully written and I adored the characters of Temp and Boots and the wonderful relationship they shared. This book made me laugh but also kept me up at night as I couldn't wait to find out what happened in the next chapter. I will definitely be reading all the books in this series and can not recommend it enough. Great read for all ages.
Read more
6 people found this helpful
Report abuse

Grahame West
5.0 out of 5 stars Better than the Hunger Games
Reviewed in the United Kingdom on 11 May 2020
Verified Purchase
Read the Hunger Games series first & bought this to read more by the same author. To my surprise & pleasingly found this series much better, more inventive and really wanted to see where the series sent. Well worth reading the series in order.
Read more
Report abuse

MD
5.0 out of 5 stars 10-yr-old boy loved it!
Reviewed in the United Kingdom on 11 June 2012
Verified Purchase
My son is 10 and up to now has only really read Beast Quest, which is fine but somewhat limited. We went to see the Hunger Games at the cinema and he loved it! While not yet ready for the Hunger Games books he was very excited about reading something by Suzanne Collins and really took to Gregor.

As a result he has since read the first sequel, has requested the other three books too and has moved on to reading other more challenging (and well-written) books too.

I am delighted!
Read more
7 people found this helpful
Report abuse
See all reviews
click to open popover
Unlimited FREE fast delivery, video streaming & more
Prime members enjoy unlimited free, fast delivery on eligible items, video streaming, ad-free music, exclusive access to deals & more.
> Get started
Back to top
Get to Know Us
Connect with Us
Make Money with Us
Let Us Help You
EnglishChoose a language for shopping.
© 1996-2021, Amazon.com, Inc. or its affiliates