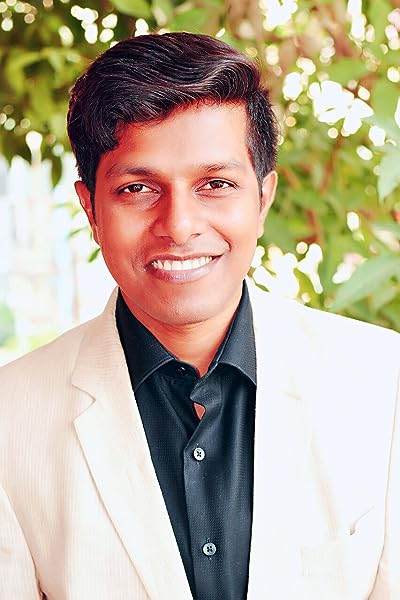 by Vishal Anand (Author)
4.2 out of 5 stars 251 ratings
See all formats and editions
Sorry, there was a problem loading this page. Try again.
10 Days Replacement Only
Read more Read less
Previous page
Next page

Vishal Anand is the author of one bestselling novel, 37 + Grace Marks and two short story collections titled Urban Lights and Emotions Unplugged. His books have not just carved a niche in the reader’s heart but has also remained popular since its release. The Hindu says, he deals human emotions with deep sensitivity and sensibility. Hindustan Times called him ‘a perfect example of a small town boy with big time success’ and The Telegraph mentioned him as an ‘Author who is creating ripples in the literary circuit’. Vishal works in the marketing team of a digital transformation, infrastructure, security, and product engineering services company, based out of Bangalore.

Start reading One & A Half Love Story on your Kindle in under a minute.

4.2 out of 5 stars
4.2 out of 5
251 global ratings
How are ratings calculated?
To calculate the overall star rating and percentage breakdown by star, we don’t use a simple average. Instead, our system considers things like how recent a review is and if the reviewer bought the item on Amazon. It also analyses reviews to verify trustworthiness.

Khushboo mahato
4.0 out of 5 stars Heartwarming
Reviewed in India on 22 December 2020
Verified Purchase
Book: One and Half Love story
Author: Vishal Anand
Publisher: Moments Publication
Genre: Romance
Format: Paperback
Pages: 200
*Spoiler Alert*
Let’s discuss it in depth:
One and a half love story is built around the main character Viraj and the struggle he faces with two women- Nimish and Shriya. Viraj is a simple guy who values simple things in life. He is career-oriented and takes pride in what he has accomplished in his professional life. He has been madly in love with a girl Nimisha since college. He believes that love happens only once so he refuses to give away the special place he has in his heart for Nimisha.
Soon Shriya comes into his life and leaves no stone unturned to convince Viraj that she is madly in love with him. Viraj does respect her feelings but says that he thinks of her as nothing more than a friend. Shortly after Shriya comes into his life Viraj and Nimisha decide to be a couple. Things are going great but Nimisha accidentally finds out about Shriya and believes that there is something going on between Shriya and Viraj. Convinced that Viraj has cheated on her, Nimisha decides to cut all ties. This sends Viraj spiraling down who is trying desperately to make things right.
Book Review:
In all honesty, this book was a guilty pleasure. At places it made me feel like- ‘No, that does not happen’. On the other hand, it felt like ‘Yup! That’s exactly how it happens’. The author's personification of Viraj is simple. He is a kind gentleman, quite old school, and knows that hard work plays off. While reading this book I have realized that Viraj, as a person, is attracted to strong personalities.
Both Nimisha and Shriya are well endowed. They both have abandonment issues since they live in India all by themselves. Their parents choose to settle abroad while the girls made their careers in India. Both Nimisha and Shriya are strong in their own ways. They can have the entire world to themselves. But the question that arises here is- why did both these women love Viraj?
My theory is neither of them loved Viraj. For both of them, Viraj represented a male figure which they desperately wanted in their life. They both fell in love with Viraj’s kindness. Viraj being a gentleman has always been respectful and helped both these women at different points in time. They loved Viraj for his values. Once you read the book, you will realize that Viraj, despite being mad at Shriya for literally destroying his relationship with Nimisha, helps Shriya after the tragic accident. This is what made me question the feeling of both Nimish and Shriya. One does not fall in love with a person just because they took care of you after an accident.
I think it was their desire to have a male figure in life- strong, someone whom they could rely on which made both Nimisha and Shriya have feelings for Viraj. In the book there comes a point, post-breakup, when Nimisha confesses that she didn’t feel a spark between herself and Viraj. There is no further explanation as to why she says that or is it even true.
Coming to the literature, I would say that it is a little amateur in places. The beginning is a little rocky but eventually, it wraps you in a sense of reality. As you progress you realize that this is how things happen in real life. People take risks and jump hoops for people they love.
In many ways, I could connect with Viraj as a person. He is one of the most philosophical characters. He is one of those characters whom you hate in the beginning but eventually start loving.
Read more
11 people found this helpful
Helpful
Report abuse

Queen's omelette
4.0 out of 5 stars Good read.
Reviewed in India on 22 December 2020
Verified Purchase
I hardly pick up a romantic genre that too from an indian author now a days. This book i picked up by reading the prologue alone and certainly the writing picked up my curiosity. It has been written amazingly. Not that half sentense or short dialogues like you are reading a movie script.

The characters are written fabulously. Although as not a romance reader i couldnt connect with all of them, but still its 4 stars from me so its huge deal.

I liked how the story flows. And where it pulls or from the start. The story could have been more flushed out. So far its an amazing read.
Read more

4.0 out of 5 stars Good read.
By Queen&#39;s omelette on 22 December 2020
I hardly pick up a romantic genre that too from an indian author now a days. This book i picked up by reading the prologue alone and certainly the writing picked up my curiosity. It has been written amazingly. Not that half sentense or short dialogues like you are reading a movie script.

The characters are written fabulously. Although as not a romance reader i couldnt connect with all of them, but still its 4 stars from me so its huge deal.

I liked how the story flows. And where it pulls or from the start. The story could have been more flushed out. So far its an amazing read.

Sameer Deshpande
5.0 out of 5 stars Emotionally Romantic Read!
Reviewed in India on 8 March 2021
Verified Purchase
🔻Book Review 📙🔻
▪️Book Title: One and a Half Love Story
▪️Author: Vishal Anand
▪️Genre: Literary Romance
▪️Pages: 203 + xvii
▪️ Publisher: Moments Publications
.
One and a Half Love Story, the title intrigued me more. The title feels so accurate in the end. The story is typical Love triangle, the main protagonists being Viraj, Nimisha and Shriya. Viraj and Nimisha are college friends, while Shriya and Viraj are colleagues.
.
Nimisha is Viraj's crush since college days, they both happen to meet at his residence after she had met an accident. Here, paralelly Shriya had developed feelings for Viraj. Things go worser at a point of time, how did they cope? Whom will Viraj choose? How does it feel when you are broken down without a chance to explain things? Get a copy to know! :)
.
The way you enjoy reading, the way you start getting involved in the story, the way characters make a picturesque in your mind is all that makes this book different other typical Triangle Love Stories. Lucid writing style, I loved bunch of quotes from this book. Would surely recommend if you are looking for a realistic read. Happy Reading!
Read more
2 people found this helpful
Helpful
Report abuse

MR
5.0 out of 5 stars Romantic love triangle
Reviewed in India on 2 January 2021
Verified Purchase
Viraj has loved Nimisha since college days. One day she decides to surprise him. She wants to spend one full week with him in his hometown Banglore. She flies from Pune just to be with him. Just when he is happy to see the love of his life close to him, Shriya, his colleague ruins their perfect beginning of the love story.
This is a twisted love story where a guy wants to pursue his love and is willing to wait till eternity only to lose her when she is inches away from him. The narration is very simple and the story is very cute. Each character has a different and a strong personality. This is a perfect book for all the romance and love story readers.
Read more
2 people found this helpful
Helpful
Report abuse

sangam
4.0 out of 5 stars I recommend to the fools of love this epitome of a love triangle.
Reviewed in India on 22 January 2021
Verified Purchase
A love triangle set in the time of valentine’s week. The popular girl from college, the crush of a gentleman-his opportunity to show his love, and the third- new and the present of his life. The story is a rollercoaster of emotions that we all feel- when in love. Nimisha and Viraj, after a long time, have become a couple. Shriya- through unexpected coincidence, have told Nimisha about her love for Viraj. The story that unfolds, Nimisha misconception, their break-up and her realization that she never did love Viraj. The story of their individual lives is entangling. It explores the meaning of love, how does love define you, is it material attachment or self- fulfilment. It also takes you to the dark corners of love where you feel afraid. It talks about all that is love. And that is what makes it an amazing and unputdownable read. I recommend to the fools of love this epitome of a love triangle, or if I may, One and a half love story.
Read more
3 people found this helpful
Helpful
Report abuse
See all reviews
Back to top
Get to Know Us
Connect with Us
Make Money with Us
Let Us Help You
EnglishChoose a language for shopping.
© 1996-2021, Amazon.com, Inc. or its affiliates