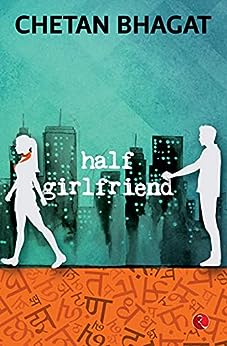 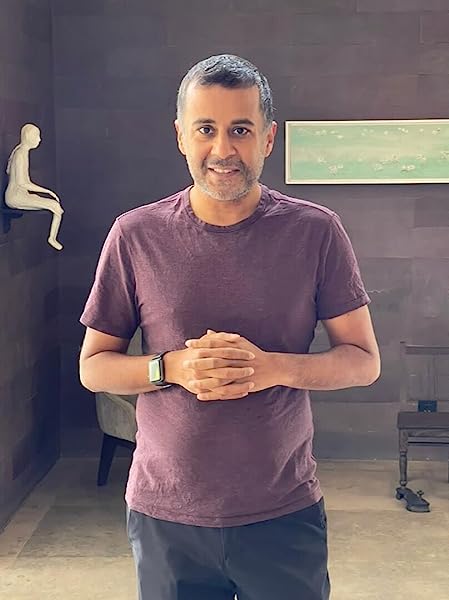 by Chetan Bhagat (Author) Format: Kindle Edition
See all formats and editions
Sorry, there was a problem loading this page. Try again.
Once upon a time there was a Bihari boy called Madhav. He fell in love with a girl called Riya. Madhav didn’t speak English well. Riya did Madhav wanted a relationship. Riya didn’t.
Riya wanted just friendship. Madhav didn’t. Riya suggested a compromise.
She agreed to be his half-girlfriend.
Welcome to Half-Girlfriend, a rural-urban love story like none other. Because to make love exist between classes, many battles need to be won.
From the author of blockbuster novels Five Point Someone, One Night @ the Call Center, The 3 Mistakes of My Life, 2 States and Revolution 2020 comes a beautiful, simple love story that will inspire you and touch your heart.
Read more
Previous page
Next page

Excellent book. Madhav and Riya make a good story and it takes new turns when they go on spaceship and explore new intergalactical planetary systems. Book deals nicely with the poverty, terrorism, depression during world war 2 and world political problems. Or may be not, I am just hallucinating. This is a simple book with simple story. Go read it, you will enjoy it --By Bhallukie on November 16, 2014

The story is simple yet lovable. I couldn't resist reading the entire book in one sitting. I too fell in love with the character Riya while reading the book. This is my third favorite book from the author Chetan Bhagat. The other too being 'five point someone' and 'three mistakes of my life'. --By Onion Knight on November 27, 2014 --This text refers to an alternate kindle_edition edition.

Chetan Bhagat is the author of seven blockbuster books. These include six novels—Five Point Someone (2004), One Night at the Call Center (2005), The 3 Mistakes of My Life (2008), 2 States (2009), Revolution 2020 (2011), One Indian Girl (2016)—and the non-fiction title What Young India Wants (2012).Chetan’s books have remained bestsellers since their release and have been equally celebrated on the big screen. This is the fifth book which has now been adapted into a major Bollywood film.The New York Times called him the ‘the biggest selling English language novelist in India’s history’. TIME magazine named him amongst the ‘100 most influential people in the world’ and Fast Company, USA, listed him as one of the world’s ‘100 most creative people in business’.Chetan writes columns for leading English and Hindi newspapers, focusing on youth and national development issues. He is also a motivational speaker and screenplay writer.Chetan quit his international investment banking career in 2009 to devote his entire time to writing and making change happen in the country. He lives in Mumbai with his wife, Anusha, an ex-classmate from IIM-A and his twin sons, Shyam and Ishaan. --This text refers to an out of print or unavailable edition of this title.

Chetan Bhagat is the author of nine blockbuster books. These include seven novels—Five Point Someone (2004), One Night @ the Call Center (2005), The 3 Mistakes of My Life (2008), 2 States (2009), Revolution 2020 (2011), Half Girlfriend (2014) and One Indian Girl (2016) and two non-fiction titles— What Young India Wants (2012) and Making India Awesome(2015). His upcoming book 400 Days is now available to preorder and will release on 17th September 2021. Chetan’s books have remained bestsellers since their release. Four out his five novels have been already adapted into successful Bollywood films and the others are in process of being adapted as well. The New York Times called him the ‘the biggest selling English language novelist in India’s history’. Time magazine named him amongst the ‘100 most influential people in the world’ and Fast Company, USA, listed him as one of the world’s ‘100 most creative people in business’. Chetan writes columns for leading English and Hindi newspapers, focusing on youth and national development issues. He is also a motivational speaker and screenplay writer. Chetan quit his international investment banking career in 2009 to devote his entire time to writing and make change happen in the country. He lives in Mumbai with his wife, Anusha, an ex-classmate from IIM-A, and his twin boys, Shyam and Ishaan. You can email him at info@chetanbhagat.com or fill in the Guestbook with your feedback. You can also follow him on twitter (@chetan_bhagat) or like his Facebook fanpage (https://www.facebook.com/chetanbhagat.fanpage).

4.2 out of 5 stars
4.2 out of 5
12,867 global ratings
How are ratings calculated?
To calculate the overall star rating and percentage breakdown by star, we don’t use a simple average. Instead, our system considers things like how recent a review is and if the reviewer bought the item on Amazon. It also analyses reviews to verify trustworthiness.
View Image Gallery

Amazon Customer
4.0 out of 5 stars Emotional intimate love story.
Reviewed in India on 25 May 2022
I had already watched the movie. But out of the curiosity how it is in the novel i bought this. I felt good reading the love story. One's who like romantic stories can go for it. The quality of book is good too.
Images in this review

Abhishek vatsal
4.0 out of 5 stars Interesting novel
Reviewed in India 🇮🇳 on 26 September 2022
Verified Purchase
I bought this novel only for English reading purpose but when I started reading it I got involved as much as I read it the story of this novel is very interesting with easy english word beneficial for beginners to improving english reading.
Read more
Helpful
Report abuse

Rao
4.0 out of 5 stars Typical Chetan Bhagat Story
Reviewed in India 🇮🇳 on 7 August 2022
Verified Purchase
This book deals with a Bihari boy falling in love with a Delhi girl. Travels from Bihar to New York in search of his love.. Well written..
Read more
One person found this helpful
Helpful
Report abuse

Mayank
5.0 out of 5 stars Truly heart touching
Reviewed in India 🇮🇳 on 20 August 2022
Verified Purchase
I think I have read this third time within a period of 7 years, always seems some new while reading.
Read more
Helpful
Report abuse
See all reviews

Al
5.0 out of 5 stars Very nice
Reviewed in the United Kingdom 🇬🇧 on 11 January 2017
Verified Purchase
This is a very nice read - I do not mean that in any patronising, sarcastic or condescending way - it is genuinely a very nice, easy read, well plotted and told, albeit the denouement is a bit naff (after all that had gone before, what on earth was going on in Riya's head?).
Having been a frequent visitor to India and Delhi in particular, I could identify with and enjoyed a lot of the place descriptions, and, having been through the growing up process (admittedly, a long time ago), I could identify with a lot of Madhav's thoughts and emotions; however my growing up took place in a far more permissive society than India's, so it took place in my early teens, not my late teens or early twenties, as in Madhav's case.
I will certainly try more from Mr Bhagat.

Bijal
5.0 out of 5 stars Best book ever
Reviewed in the United Kingdom 🇬🇧 on 21 May 2020
Verified Purchase
Love love this book , my favourite book ever amazing story and storyline
Read more
Report abuse

Gurjinder
5.0 out of 5 stars Loved reading this book
Reviewed in the United Kingdom 🇬🇧 on 6 March 2019
Verified Purchase
Really enjoyed reading this book, it had many twists and kept you guessing. I would love to see a part two!
Read more
Report abuse

mr p corcoran
1.0 out of 5 stars Irritating
Reviewed in the United Kingdom 🇬🇧 on 3 December 2017
Verified Purchase
Idea good , but too obvious and irritating in the mundane drift downwards to the end of the story.
Read more
Report abuse

Rebecca Hill
4.0 out of 5 stars Great read
Reviewed in the United Kingdom 🇬🇧 on 11 April 2017
Verified Purchase
Easy to read, interesting plot and not too obvious - I'd recommend reading this if you don't want to think too hard!
Read more
Report abuse
See all reviews
Report an issue
Does this item contain inappropriate content?
Report
Do you believe that this item violates a copyright?
Report
Does this item contain quality or formatting issues?
Report