Skip to main content
The Hallo-Wiener and over 2 million other books are available for Amazon Kindle . Learn more
Share
Have one to sell?
Sell on Amazon 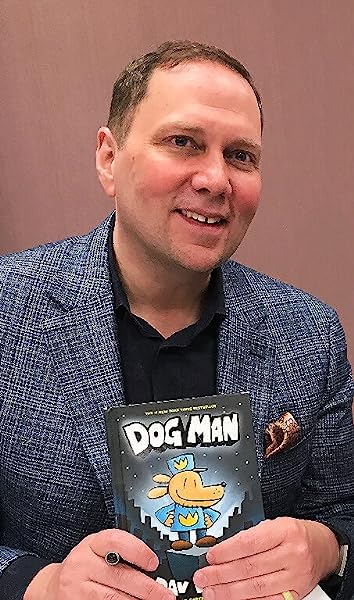 Ages 4^-7. Oscar the dachshund is a dog with a problem: it's hard to win doggy respect when your mother calls you "my little Vienna Sausage." Mom's idea of a Halloween costume is a bun with mustard, but Oscar makes the most of the outfit, defeating a monstrous pair of masquerading cats to get his nickname changed from Wiener Dog to Hero Sandwich. Pilkey's wacky humor comes out in both story and pictures--a recalcitrant pupil at school writes on the chalkboard, "I will not sniff my neighbor." Set against a series of vivid, clearly painted skies, the pictures promise a world in which menace is only artificial and underdogs can become wonderdogs. Mary Harris Veeder

"Raising this story above cliche and bringing its poignancy is Oscar's goodness, which shines almost perpetually." - Kirkus - pointer review

"This may be the funniest Halloween story ever written, and it's definitely got the most lovable hero." - SLJ - starred review

Oscar is a little dog with a big problem -- the other dogs tease him all the time. Now it's up to Oscar to prove that a little wiener can be a real winner!

The Hallo-Wiener is a treat!

* "This may be the funniest Halloween story ever written, and it's definitely got the most lovable hero." -- School Library Journal, starred review

DAV PILKEY is the award-winning author/illustrator of the best-selling Captain Underpants series, The Hallo- Wiener, 'Twas the Night Before Thanksgiving, and the 1997 Caldecott Honor Book The Paperboy. Dav has also written the popular Ricky Ricotta series. He lives in the Pacific Northwest.
Read more

Start reading The Hallo-Wiener on your Kindle in under a minute.

4.9 out of 5 stars
4.9 out of 5
851 global ratings
How are ratings calculated?
To calculate the overall star rating and percentage breakdown by star, we don’t use a simple average. Instead, our system considers things like how recent a review is and if the reviewer bought the item on Amazon. It also analyses reviews to verify trustworthiness.

Kindle Customer
5.0 out of 5 stars Funny
Reviewed in the United Kingdom on 7 August 2019
Verified Purchase
I like Dav Pilkey
Read more
Report abuse

Mrs L Simpson
5.0 out of 5 stars My son enjoyed reading
Reviewed in the United Kingdom on 12 May 2017
Verified Purchase
Great short story. My son is a Dav Pilkey fan so enjoys all of this authors books. My son is 6.
Read more
One person found this helpful
Report abuse

Debra J Laurie
5.0 out of 5 stars A hit with a wide variety of ages!!
Reviewed in Canada on 31 October 2019
Verified Purchase
Shared with my ESL students and it was a most enjoyable experience!!
Read more
Report abuse

Momo
5.0 out of 5 stars Fantastic book!
Reviewed in Canada on 31 May 2019
Verified Purchase
So happy with this purchase! Very cute book and illustrations. Perfect for any dachshund lover or anyone who appreciates the message- that it's ok to be different and actually a good thing!
Read more
Report abuse