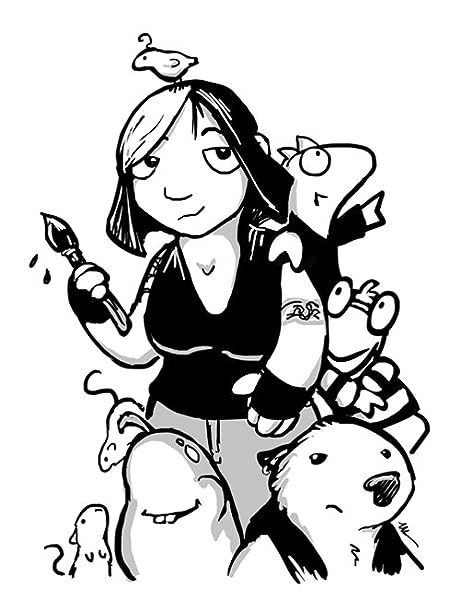 by Ursula Vernon (Author)
4.8 out of 5 stars 128 ratings
Book 6 of 6: Hamster Princess
See all formats and editions
Sorry, there was a problem loading this page. Try again.

It's Little Red Riding Hood as you've never seen her before in this funny, feminist spin on the fairy tale, from award-winning author Ursula VernonMost monsters know better than to mess with Princess Harriet Hamsterbone. She's a fearsome warrior, an accomplished jouster, and is so convincing that she once converted a beastly Ogrecat to vegetarianism. So why would a pack of weasel-wolf monsters come to her for help? Well, there's something downright spooky going on in the forest where they live, and it all centers around a mysterious girl in a red cape. No one knows better than Harriet that little girls aren't always sweet. Luckily there's no problem too big or bad for this princess to solve. In this sixth installment of her whip-smart Hamster Princess series, Ursula Vernon once again upends fairy tale tropes and subverts gender stereotypes to brilliant effect. This is a "Once Upon a Time" like you've never seen before.
Read more
Previous page
Next page

Total price:
To see our price, add these items to your cart.
These items are dispatched from and sold by different sellers.
Show details Hide details
Choose items to buy together.

Ursula Vernon is a full-time author and illustrator whose work has won two Hugo Awards and been nominated for an Eisner. She loves birding, gardening, and spunky heroines, and thinks she would make a terrible princess. Ursula lives with her husband in Pittsboro, North Carolina.

4.8 out of 5 stars
4.8 out of 5
128 global ratings
How are ratings calculated?
To calculate the overall star rating and percentage breakdown by star, we don’t use a simple average. Instead, our system considers things like how recent a review is and if the reviewer bought the item on Amazon. It also analyses reviews to verify trustworthiness.

Munker
5.0 out of 5 stars More adventures! More hamsters!!
Reviewed in the United States 🇺🇸 on 24 January 2020
Verified Purchase
I so dearly love this series. It's funny--wickedly funny--clever and heartwarming. I came in around the third book, so I've been eagerly following along, and I think we're due for another adventure with Harriet, her sidekicks, and one brave battle quail. I confess, I've been hoping that Ratpunzel will settle down with a certain handsome prince, and surely any royal wedding will have some problems that need fixing by Harriet, perhaps with some input from the Bat Ambassador? Until then, I'll keep re-reading my favorite...which is all of them.
Read more
Report abuse

Leslie Montgomery
5.0 out of 5 stars Adventurous Story
Reviewed in the United States 🇺🇸 on 22 June 2019
Verified Purchase
This series is incredible. The story line is very engaging. My 8 year old daughter (who doesn't want to be a princess, nor read about them) loves the series, as does my ten year old son. This series played a HUGE part in convincing my daughter to love to read - she was previously very reluctant/not motivated to read.
Read more
One person found this helpful
Report abuse
See all reviews