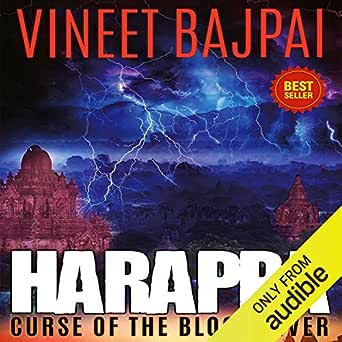 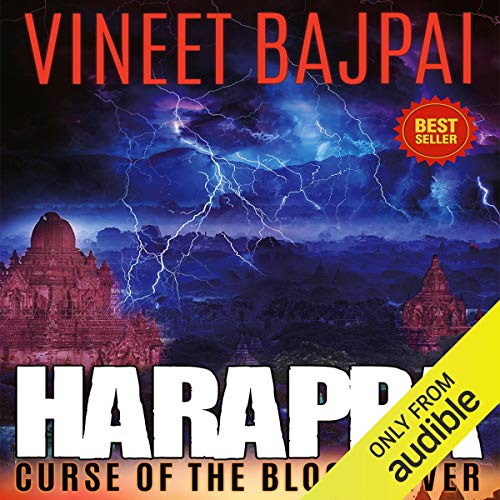 Harappa: Curse of the Blood River

By completing your purchase you agree to Audible’s Conditions Of Use Amazon's Privacy Notice and if applicable Audible's Recurring Payment Terms.
Sold and delivered by Audible, an Amazon company

4.1 out of 5 stars
4.1 out of 5
1,068 global ratings
How are ratings calculated?
To calculate the overall star rating and percentage breakdown by star, we don’t use a simple average. Instead, our system considers things like how recent a review is and if the reviewer bought the item on Amazon. It also analyses reviews to verify trustworthiness.

Perceptive Reader
1.0 out of 5 stars Accursed!
Reviewed in India on 3 January 2019
Verified Purchase
What happens when a decent plot, with enough sprinkling of history and conspiracy theory, gets handled by someone with horrible writing skills?
We have Harappa! Not the City that must have played a pivotal role in the history of mankind. But this horrid novel which seems to have taken the readers 'by storm' (expression used in too many paid reviews). But that's to be expected. Most of those gushers have compared this work with those penned by Dan Brown (atrocious writing) and Ashwin Sanghi (infodumping, sermonising, being formulaic to the point of self-parody). Trouble is, the plot was ideal for a genuine gripping thriller. Had the novel been vacuous in that aspect as well, I could have overlooked it. But such an interesting pseudo-historical plot has been completely trashed by pathetic writing, stereotypical characterisations, and repeatedly using the same expressions. Believe me, if someone claims to be half human, half Devta even once, I would keep hitting his/her skull with this book until someone stops me or something happens.
Read history books, preferably 'Political History of Ancient India' and 'The Lost River'. They are more thrilling, informative, and vastly superior in terms of writing.
Not Recommended.

Simant Verma
5.0 out of 5 stars A wonderful and gripping tail mixed with fantasy and contemporary elements
Reviewed in India on 6 September 2017
Verified Purchase
Actual rating 4.5 (but I didn't want to give it 4 stars here!).

Why I was intrigued towards reading this was because of the title itself: Harappa. I have never read anything about this civilization, of course except the course books. So, when I got a chance to review this book I, I grabbed it instantly. And I was not disappointed at all.

The story starts when Vidyut Shashtri, the main protagonist of the story, is called upon to Varanasi where his great-grandfather, Dwarka Shashtri, is on deathbed. Vidyut is a successful entrepreneur and an eligible bachelor who lives with her girlfriend Damini who is a journalist. When Vidyut reaches Varanasi, his great-grandfather starts telling him the story of the curse that has been brought upon his entire generation and the humankind by his ancestor Vivasvan Shatri.

Parallel to this story is running another story, including Vivasvan Pujari as main Protagonist, in 1700 BCE during the great Harappa civilization or the Indus Valley civilization. Vivasvan Pujari is the chief priest of the city and he was soon to become the lead person of Harappa. This was not acceptable to Priyamvada, the wife of Vivasvan’s best friend and brother-in-law Pundit Chandradhar. She conspires against him with dark forces and ultimately turns every person in Harappa against him. This ultimately leads to the destruction of Harappa and put a curse on Vivasvan’s bloodline.

In present, the story goes to Rome where an assassin is planning to kill Vidyut and thus sends a person Romi to Varanasi to kill Vidyut. With the help of his friends, Vidyut managed to save himself. The story then reveals various secrets.

Character building and plot development
--------------------------------------------------------------------------
I guess the plot is the main and strongest part of this story. The plot is constructed so well around different eras that you don’t feel that you suddenly jumped from one time period to another. All the events are well connected and fast paced. The author has maintained a very good level of thriller and suspense throughout the book. Vineet Bajpai has cleverly crafted the storyline. He doesn’t provide with too much secret at one point and just left the other parts simply boring. In fact, he has unfolded the secrets one by one leaving the readers to want more. There are so many twists and turns that you keep turning on the pages.

As this is the first book in the series, the details of the main antagonists were kept short. The main focus was kept on the storyline and the and the characters involved. All the characters are well developed. Each character has been presented according to their era. I haven't thought that the writer would present the environment of Dev-Raakshasa Matth in such a modern way. The author has also portrayed some of the female characters pretty bold. The description of all the food provided in Matth was so tempting!

The writing of the author shows how much research has been done about Harappa and Varanasi. The description of Harappa felt as if it is coming straight from a famous history book and many times it made me believe as if all the things were real. The description of Kashi/Varanasi is equally beautiful. It is evident in the author's writing that he follows Hinduism devotionally. I loved how he has described his bold thoughts about religion.

"The succession of horrors and violence that Harappa was about to withstand had never been witnessed before by mankind, but hereon would be endured again and again. Each time man would shed the blood of innocents to quench the unquenchable thirst of one demon. Every era would hear the shrieks of suffering millions, only to satisfy the insatiable hunger of one tyrant who wanted it all for himself. And it was going to begin soon."

Final Thoughts
-------------------------------------------------------
Mythological fiction is a recent trend in India and though I haven't read much of this genre, I know that it isn't always the case that an Indian author pulls such a great and engrossing story. Vineet Bajpai has perfectly mixed up the fantasy and contemporary, the past and the present. The story ends with a cliffhanger and many questions remained unanswered. It left me hooked till the last page and I really wish the second book comes soon and it is as good as this. Harappa was such a refreshing read. It would be no surprise if this gets adapted to a feature film :P If you are into this genre, then I would definitely recommend it to you.

Pritam Majumder
3.0 out of 5 stars One time good read
Reviewed in India on 31 October 2017
Verified Purchase
There is some good and bad things about this book. Firstly I am starting with good thing. The story is like a Masala movie, and we like this type of movies because we don't need to use our thoughts very much. We just need to grab popcorn and enjoy it. Thats why I am giving 3 star. But if I talke about bad things there are so many. First the author unnecessarily glorify his characters, which is sometimes very annoying. Secondly he tried to twist the plot so much that sometimes looks like author even lost his way through the plot. And finally I should say he could have revealed some of suspence so readers will wait for the sequel much eagerly.
Read more
25 people found this helpful
Helpful
Report abuse

Sahil
5.0 out of 5 stars Marvellous, enchanting & extremely creative.
Reviewed in India on 21 February 2019
Verified Purchase
This is the first novel that i dearly loved.I love the continuity and flow of author.This book will definitely take you into trans.The perfect blend of history and present.The presentation of lead role is just wow.I can bet you that if you start reading this book you will not put it off until you finished.When i finished this book i was dying to read the next sequel of Pralay which was equally fascinating.
Read more

Medha karn
2.0 out of 5 stars "Cheap dupe of Dan Brown- not worth reading"
Reviewed in India on 16 November 2018
Verified Purchase
1. Delivery by Amazon: I was at a remote location, so it was delivered by a Delivery Partner of A. Fast delivery, before time and signature was required before hand over. Book was in good condition and looks authentic. There is so much white space on the pages. More white space than the letters that you can write the same book twice.

2. Now, let's talk about the book:
*Book started with a good promise, but very soon curdled with unnecessary details, extreme exaggeration of everything, repeatedly unnecessary talk about sensuous stuff (like how beautiful one was, how sexy one was, how terrific, how blahdiiipalllaabooolooo you get the drift), unnecessary irritating details of how brave, how daring, how *insert adjective* the character was, vague plot and excessively stretching a dry content-deficient story.
Alternating narration of ancient and modern storylines is pretty annoying. I don't know how it got 4 stars and 600+ people reading and appreciating it.

P.S.: The author wrote the story like he tried to be a (cheap) Dupe of Dan Brown. **He probably was**
Read more
8 people found this helpful
Helpful
Report abuse
See all reviews

Atanu Lahiri
5.0 out of 5 stars Another great thriller
Reviewed in the United States on 15 January 2020
Verified Purchase
Love the connections to history and the larger-than-life characters. I enjoyed reading this book, but it seems that I need to read the entire trilogy to get the complete story. I certainly plan on doing that since it's not easy to remain in a limbo state forever.
Read more
Report abuse

Kindle Customer
1.0 out of 5 stars A Bollywood movie starring a half-human half-god!
Reviewed in the United States on 23 March 2019
Verified Purchase
While this book is good for entertainment, it disappoints as a serious novel. There is potentially such a great story here, but it's ruined by too much glorification of the main characters, an extremely biased view of various parts of India and Indian culture, food, etc. It's a bit like bahubali on steroids. Too much unnecessary descriptors of the glorious past of the subcontinent, etc. give it a go and read it, but be prepared for lots of cheesy scenes!
Read more
One person found this helpful
Report abuse

Kindle Customer
4.0 out of 5 stars A gripping saga
Reviewed in the United States on 9 September 2017
Verified Purchase
A fast paced historical fiction,manages to hold your attention till end. It's like a story has been woven seamlessly in Sanjiv Sanyals land of seven rivers ! Though jarring at times , with certain clichés ,and some unbelievable change of events , but it worked for me on a overall level. Wish you good fortune in the wars to come!
Read more
One person found this helpful
Report abuse

Prachi
5.0 out of 5 stars Great Read
Reviewed in the United States on 6 December 2017
Verified Purchase
Gripping tale of a land long lost in the sands of time. The book just sucks you into a realm far intriguing and so full of mysteries that you would not want to come out of it.
Read more
One person found this helpful
Report abuse

vishal
5.0 out of 5 stars Action packed historical thriller : Dan brown meets Jason Bourne
Reviewed in the United States on 30 July 2017
Verified Purchase
I loved the fast pace, the research, and the crisp writing.
Sounds like a cliche but this is really an unputdownable book!
Read more
One person found this helpful
Report abuse
See all reviews
Unlimited FREE fast delivery, video streaming & more
Prime members enjoy unlimited free, fast delivery on eligible items, video streaming, ad-free music, exclusive access to deals & more.
> Get started
Back to top
Get to Know Us
Connect with Us
Make Money with Us
Let Us Help You
EnglishChoose a language for shopping.
© 1996-2020, Amazon.com, Inc. or its affiliates