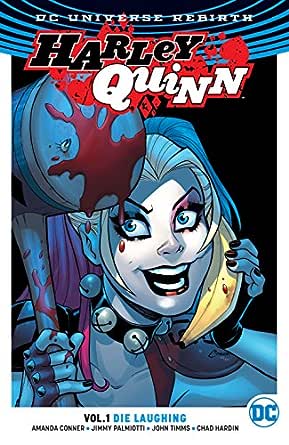 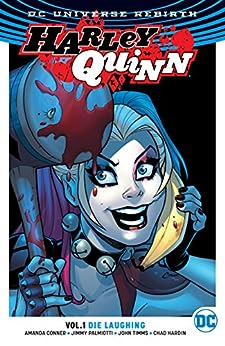 “It's silly, it's funny, it's irreverent.”—Comic Book Resources

"Every bit as chaotic and unabashedly fun as one would expect.”—IGN

“Harley Quinn is a pure joy as a self-referential comedic anti-villain, and an antidote to the far too serious superhero operas that it shares its universe with.”—Newsarama --This text refers to the paperback edition.

Jimmy Palmiotti is a multi-award-winning comic book creator with a wide range of experience in advertising, production, editorial, film writing and production, media presentation, and video game development. He has created and co-created numerous series and characters, including The New West, THE MONOLITH, 21 DOWN, THE RESISTANCE, Gatecrasher,Beautiful Killer, Back to Brooklyn, The Tattered Man and Painkiller Jane. He has co-written DC's ALL-STAR WESTERN and BATWING with Justin Gray, as well as HARLEY QUINN and STARFIRE with Amanda Conner.

Amanda Conner started out in comics after working as an illustrator for New York ad agencies. However, loving comic books and cartooning the most, Amanda found work at Archie, Marvel and Claypool Comics early in her career. She's probably best known for her work on Vampirella for Harris Comics, as well as Painkiller Jane, CODENAME KNOCKOUT, BIRDS OF PREY, and the creator-owned books Gatecrasher and The Pro (with Jimmy Palmiotti and Garth Ennis). --This text refers to the paperback edition.

4.5 out of 5 stars
4.5 out of 5
133 global ratings
How are ratings calculated?
To calculate the overall star rating and percentage breakdown by star, we don’t use a simple average. Instead, our system considers things like how recent a review is and if the reviewer bought the item on Amazon. It also analyses reviews to verify trustworthiness.

andrew parish
2.0 out of 5 stars Not a fan
Reviewed in the United Kingdom on 31 March 2017
Verified Purchase
I didn't really have high expectations for this book and was really hoping it would surprise me. The art is OK and the story is actually 3 or 4 short stories that don't really have much to do with each other at all. Other people might like this but I'm really not a fan, it doesn't feel like it belongs in the main continuity whatsoever. I'm a huge DC fan and have bought all of the trade's up to this point and I've got to say it seems like the writer is really pushing for Harley to become the 4th wall breaking DC version of deadpool and I don't really like it, one of the characters is even called red tool and is dressed virtually the same. I much prefer Harley how she was back when she was with the joker.
Read more
One person found this helpful
Report abuse

Miroslav Filipov
5.0 out of 5 stars Beautiful art
Reviewed in the United Kingdom on 21 December 2019
Verified Purchase
The item came really fast, in perfect condition.Everything is as described.The art is great - from first page to the last one, this stories are perfect.100 % Entertainment.The price is cheap - buy it now !
Read more
One person found this helpful
Report abuse

Barcs
5.0 out of 5 stars Perfect
Reviewed in the United Kingdom on 22 November 2020
Verified Purchase
Art and storyline are perfect as ever for the Harley Quinn series...must read for any fan. The cover alone is worth the money!
Read more
Report abuse

Shannon Pearce
2.0 out of 5 stars Depends on what you're looking for
Reviewed in the United Kingdom on 3 December 2017
Verified Purchase
If you're looking for a comic book full of a badass, killing machine version of Harley you're not going to find it here. I found the character lacking her evil spirit and instead presenting a very girly side of her. If you don't mind seeing the girly side of Harley then this is the book for you
Read more
One person found this helpful
Report abuse
See all reviews
click to open popover
Unlimited FREE fast delivery, video streaming & more
Prime members enjoy unlimited free, fast delivery on eligible items, video streaming, ad-free music, exclusive access to deals & more.
> Get started
Back to top
Get to Know Us
Connect with Us
Make Money with Us
Let Us Help You
EnglishChoose a language for shopping.
© 1996-2020, Amazon.com, Inc. or its affiliates