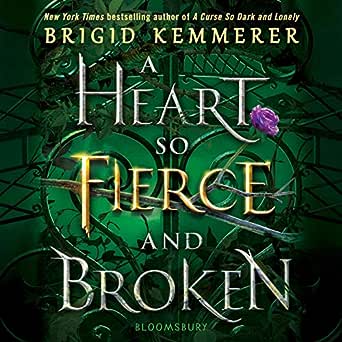 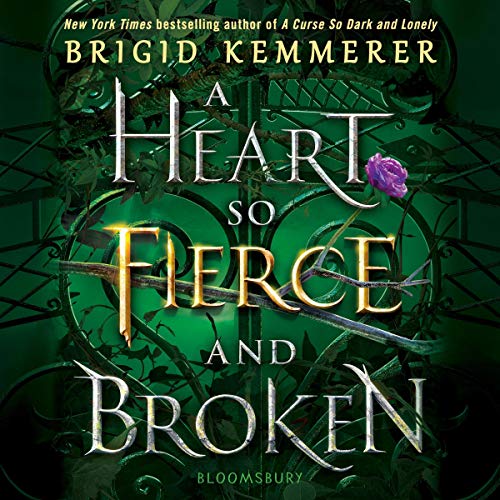 A Heart so Fierce and Broken

By completing your purchase you agree to Audible’s Conditions Of Use Amazon's Privacy Notice and if applicable Audible's Recurring Payment Terms.
Sold and delivered by Audible, an Amazon company
Share
Helpful
Report abuse
See all reviews

I wasn’t sure what direction this book was going to go in, I certainly didn’t think I was going to love it as much as A Curse so Dark and Lonely but I ended up loving it even more…

This book follows my all time favourite literary characters – Grey. That man has been through so much, and he tries to keep it all hidden. I honestly don’t know how he remained so strong throughout the curse, and then with everything that followed. My heart goes out to him. I love him so much.

Lia Mara was a pleasant surprise. I was charmed almost immediately. She doesn’t see herself the way others do, and I love that she has people around her trying to make her see her strengths.

Iisak and Tycho became instant favourites for me. I swore when reading it if anything happened to Tycho leading up to Grey's questioning I would never forgive Rhen.. And I won’t. I don’t care what is being done to him in secret. I will never get past what happened.

This story was emotional and intense. I didn’t know who to trust. I wasn’t expecting everything to unfold the way it did. I suspected the ending but everything else was a rollercoaster. I want to reread it right now.

"The most dangerous person at the party is always the girl sitting alone with a book.”
Read more
3 people found this helpful
Report abuse

BookWorm
5.0 out of 5 stars Excellent sequel with great characters
Reviewed in the United Kingdom on 28 March 2020
Verified Purchase
This exceptional follow-up novel is every bit as good as the original, maybe even better. The characters we learned to love in the first novel must continue their challenges - because Kemmerer's books might have a fairytale setting but there's no such thing here as happy ever after. It is narrated in alternating chapters by a returning favourite character, Grey, and a new character (who'll quickly become a favourite), Lia Mara. The curse has been lifted on prince Rhen and his kingdom, but his hold on power is tenuous, his subjects rebellious, and his neighbours eager to invade. Grey, once loyal commander of the palace guard, is living in exile and hiding a dangerous secret. Meanwhile Lia Mara, princess of the hostile queen of Syhl Shallow, is travelling with her mother to deliver an ultimatum to the beleaguered prince. Before long, these two plotlines collide.

Everything about these novels just works so well. The characters are loveable - the main characters, and also the secondary ones. Each is an individual and believable, and you root for every one of them, even when they are on different sides. Kemmerer doesn't pull punches - there are some shocking and brutal moments in these stories. The emotional angst is high as the characters we love end up enemies, which is a painful contrast from the friendship and camaraderie between them that got them through the trials of book one. It makes for a highly compelling read.

If you enjoy 'sword and sorcery' type fantasy novels you simply can't go wrong. The plot is strong, the characters great, the writing good quality and flows well. Kemmerer is a fabulous writer and after the cliffhanger ending I really hope she's got her head down working on the next!
Read more
One person found this helpful
Report abuse

Hannah
5.0 out of 5 stars a new direction to the first
Reviewed in the United Kingdom on 1 March 2020
Verified Purchase
I'd heard mixed reviews about this book - I'm not sure if I just lowered my expectations, but I loved this continuation of the story. We do move on to newer characters, and at first, I was a bit upset about this. But you know what - I fell in love with these new ones, perhaps more than Harper and Rhen. One of my sticking points with the first was that I wanted a bit more from the characters - I think A Heart So Fierce and Broken did deliver this for me.

I wasn't sure I was going to feel that strongly toward Lia Mara - she is one of the new viewpoints we follow from in this part of the story. But I love her so much! She loves books, she's caring, unflinching, and level headed. I thought I'd miss Harper's view, but I think I liked Lia a bit more.

And that end! By heck do I need to know what is going to happen next!!!
Read more
One person found this helpful
Report abuse

Micky - bookphenomena
3.0 out of 5 stars 3.5 stars - where I expected to be
Reviewed in the United Kingdom on 4 April 2021
Verified Purchase
3.5 stars

This book rating is exactly where I thought I'd be at the beginning of the book and a match for my feelings on book one. I liked it but I didn't love it.

I was pleased to be existing mainly in Grey's world rather than Rhen. Rhen who I couldn't stand at the end of Curse and now I realise I can dislike a whole lot more. Even with that said, I look forward to some real nasty fireworks in the final installment.

Lia Mara was a growth project in terms of my feelings for her. I didn't like her placement as an interest for one of the characters but I had to begrudgingly accept it. By the end of the book, I did like her. There wasn't a lot of chemistry going on though.

I missed Harper in book two. She was the character that kept me going in Curse but Grey had to be enough, add to that Iisak who was a great addition to the crew.

Rumblings are afoot for Vow to be a clash of characters and I'm ready to finish this trilogy. If I can feel the same rating for book 3, I'll be okay with that, if it's a better rating, I'll be chuffed!

I did an audio/physical combo read for this and enjoyed both formats.
Read more
Report abuse

Flo
1.0 out of 5 stars A series of terrible mistakes
Reviewed in the United Kingdom on 7 February 2021
Verified Purchase
I loved the first book so much but this book somehow let me down. After being so attached to the characters in the first book, it was hard to completely turn that off and concentrate on the new POVs while they depict Rhen as a tyrant. I do think it all started with Grey making such a bad decision by running away and not telling Rhen.
I think it’s understandable why Rhen behaved the way he did and it shows what trauma can truly do to a person (and he was terribly wrong for harming Grey). He was physically and mentally damaged by magic and gave all he had to protect his people. Then this unknown heir threatens to take everything away from him and worse, this heir has magic. It’s like one nightmare after another and his best “friend” ran away from him. He’s not even sure if Grey was working for Lilith or not.
I don’t mind my perspectives about Rhen and Harper is being challenged in this book (when did Harper become so passive?) but it’s tiring seeing the repeated messages that Lia Mara is a very nice and naive person and Grey had suffered Rhen so much during those days. Only having the 2 POVs and seeing the incoherence in characters’s behaviours made me feel a bit disconnected with this series.
It’s just my opinions and feelings reading this book. Of course I know everyone is different and many people love this second book. Maybe I expected to see more of Rhen and Harper and learning more about Grey and Lia at the same time. Not completely separated and while Rhen is done dirty this way. Hopefully the last book will be better tho.
Read more
Report abuse
See all reviews
Back to top
Get to Know Us
Connect with Us
Make Money with Us
Let Us Help You
EnglishChoose a language for shopping.
© 1996-2021, Amazon.com, Inc. or its affiliates