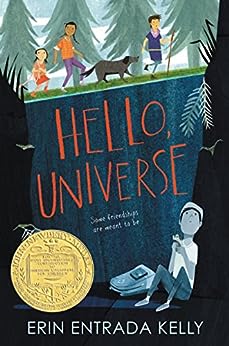 “A charming, intriguingly plotted novel by Erin Entrada Kelly. ...As she skillfully intercuts these four narratives, Kelly builds suspense and fosters empathy for her characters...As the connections deepen, it seems that this “big, mysterious, fickle” universe might harbor friendship and self-awareness for each.” -- Washington Post

★ “Four middle-schoolers’ fates intertwine one summer in Kelly’s touching tale of friendship. . . . Chapters alternate between the four kids’ perspectives, infusing the story with their unique interests, backgrounds, beliefs, and doubts. …Readers will be instantly engrossed in this relatable neighborhood adventure and its eclectic cast.” -- Booklist (starred review)

★ “Plucky protagonists and a deftly woven story will appeal to anyone who has ever felt a bit lost in the universe. Readers across the board will flock to this book that has something for nearly everyone—humor, bullying, self-acceptance, cross-generational relationships, and a smartly fateful ending.” -- School Library Journal (starred review)

★ “Kelly offers up a charming novel about a serendipitous friendship that forms among a trio of sixth graders after a bully’s heartless act brings them together. ...Infused with humor and hope, this book deftly conveys messages of resilience and self-acceptance through simple acts of everyday courage.” -- Publishers Weekly (starred review)

“Kelly creates rich and distinctive characters…through Kelly’s playful, inventive plotting, Virgil, Valencia, Kaori and Chet all confront ‘the universe’ in their own way. In the process, Kelly gives this hope to young readers: we can each discover our inner hero and transform even our toughest struggles.” -- Shelf Awareness

“Told in alternating perspectives of the three kid-heroes and one villain...the children’s inner lives are distinctive, and each rings true.” -- Horn Book Magazine

★ “Through Kelly’s playful, inventive plotting, Virgil, Valencia, Kaori and Chet all confront ‘the universe’ in their own way. In the process, Kelly gives this hope to young readers: we can each discover our inner hero and transform even our toughest struggles by...reaching out to friends and loved ones.” -- Shelf Awareness (starred review)

“Folklore, fairy tales, astrology, mysticism and dreams all mingle together to create a wonderful, fantastical and unique world...there is so much for every reader contained within.” -- BookPage

“Fate seems to be trying to bring Valencia and Virgil together, according to Kaori, but it’s sure not taking any sort of direct route. …There’s a touch of Snyder’s classic The Egypt Game here, as a group of disparate youngsters make their own maybe-magic…and find surprising bonds.” -- Bulletin of the Center for Children’s Books

“Fate—or something—works in surprising ways in this funny, empathetic look at connecting with others in a universe often harsh and inscrutable but, happily, just as often benevolent.” -- Cleveland Plain Dealer

“Suspenseful, quirky and heartwarming, Hello, Universe makes the world a little smaller, and we are better for that.” -- NPR --This text refers to the paperback edition.

4.7 out of 5 stars
4.7 out of 5
982 global ratings
How are ratings calculated?
To calculate the overall star rating and percentage breakdown by star, we don’t use a simple average. Instead, our system considers things like how recent a review is and if the reviewer bought the item on Amazon. It also analyses reviews to verify trustworthiness.
Top reviews

Abirami hariprasad
5.0 out of 5 stars wonderful book to treasure
Reviewed in India on 13 June 2020
Verified Purchase
I truly wanted to buy this one for long time especially waited for quarantine period delivery..It was a wonderful book for any growing up teen kids..exploring the world around us as well as to accept each other one for themselves. Coming together on tough times and uniting as one for getting over many obstacles..this book is truly a Gem to treasure. Definitely a amazing book to collect. Product was delivered in a best ways and proper personal handling as well.
Read more
Helpful
Report abuse
See all reviews

Anna
5.0 out of 5 stars Loved loved loved
Reviewed in Canada on 2 July 2018
Verified Purchase
I loved this book to bits. The characters are all so charming and distinct and loveable, the story is beautiful and nerve-wracking, and I teared up numerous times. I loved it!
Read more
3 people found this helpful
Report abuse

Paolo
5.0 out of 5 stars Astonishing
Reviewed in Italy on 9 August 2018
Verified Purchase
This book is one very special one because I personally don’t read a lot but this just made me think as if I was the characters shown. The story was thrilling and rich and I loved the fact that the chapters all where for the perspective of these personalities.
Read more
Report abuse

Kristin N.
5.0 out of 5 stars Great story for boys and girls
Reviewed in Germany on 26 September 2021
Verified Purchase
A wonderful story about the power of friendship. Great messages about learning self-confidence and how it's okay to be different.
Read more
Report abuse

DetroitLady
1.0 out of 5 stars From the Occult
Reviewed in the United States on 18 December 2018
Verified Purchase
For some people this type of Occult stuff is ok but if you understand how dangerous it is to play with Ouija Boards then you want to read this review. This book teaches children how to invite evil into their lives that is masked in "fun" and how to increase your"imagination" skills. Choose wisely what you want to invite into your home.
Read more
212 people found this helpful
Report abuse
See all reviews

Erin Entrada Kelly was raised in Lake Charles, La., but now lives in suburban Philadelphia. Her mother was the first in her family to emigrate from the Philippines. Erin's books have won several awards, including the APALA Award for Children's Literature, the Golden Kite Honor Award, and the Gold Award for Fiction from the Parents Choice Foundation.