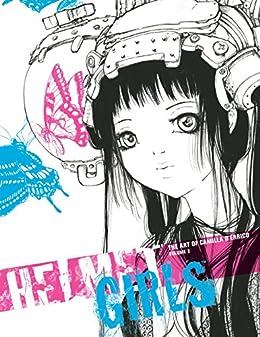 Camilla d'Errico is a first-generation Canadian, born in Ottawa, Ontario. Her Italian parents immigrated to Canada before she was born. From a young age her early interests included Saturday morning cartoons, comics, manga, and doodling fantasy elements in her textbooks. Camilla d'Errico's career as a painter began in 2006, when she participated in shows at Vancouver's Ayden Gallery in Gastown. Since early 2007, d'Errico has been showing her work in galleries across the United States and Canada, in Los Angeles, New York, San Francisco, Chicago, and Vancouver in what is known as the Lowbrow art movement. She is among the group of female artists, including Audrey Kawasaki and Amy Sol, who paint beautiful young girls in the pop surrealism category. With her work on Helmetgirls, d'Errico expanded upon the concept of headgear to include animals of all kinds, intertwining and juxtaposing her stylized, fantasy girls with lifelike animals. Her girls are unusually stunning, doe-eyed, and magnificently colorful female characters. The author lives in Vancouver, Canada.

Dan Jackson is a penciller, inker, colorist, and letterer. He has worked on The Strain, Buffy, Aliens, and Call of Duty.  --This text refers to the hardcover edition.

4.8 out of 5 stars
4.8 out of 5
18 global ratings
How are ratings calculated?
To calculate the overall star rating and percentage breakdown by star, we don’t use a simple average. Instead, our system considers things like how recent a review is and if the reviewer bought the item on Amazon. It also analyses reviews to verify trustworthiness.
Top reviews

Mr. Kyle Hutcheson
5.0 out of 5 stars Helmetgirls
Reviewed in the United Kingdom on 5 May 2013
Verified Purchase
This book is amazing. Camilla d'Errico is very much in the vein of Range Murata but has something else that makes her work maybe not better than RM but certainly as good. Highly recommended.
Read more
Report abuse