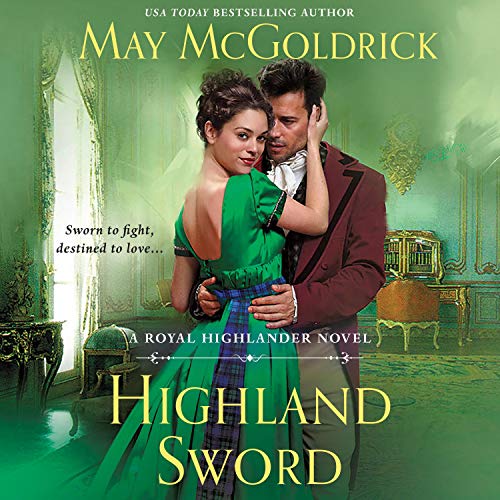 Scottish pride, persuasion, and passion - this is Highland romance at its breathtaking best.

A vow for vengeance

Fleeing to the Highlands after her father’s murder, fiery Morrigan Drummond has a score to settle with Sir Rupert Burney, the English spymaster responsible for his death. Trained to fight alongside the other rebels determined to break Britain’s hold on Scotland, she swears to avenge her father’s death - until a chance encounter with a barrister as proud and principled as she is presents her with a hard choice...and a bittersweet temptation.

A plea for passion

Aidan Grant has never encountered another woman like dangerous beauty Morrigan - and he has the bruises to prove it. Yet she could be the key to defending two innocent men, as well as striking a death blow to the reprehensible Burney. Convincing Morrigan to help him will take time, but Aidan is willing to wait if it means victory over corrupt government forces and freedom for his people...and Morrigan’s hand in marriage. Can two warriors committed to a cause stand down long enough to open their hearts to a love fierce enough to last...forever?

Read more
©2020 May McGoldrick (P)2020 Macmillan Audio
Previous page
Next page
Learn more about membership
By completing your purchase you agree to Audible’s Conditions Of Use Amazon's Privacy Notice.
Sold and delivered by Audible, an Amazon company
Share

4.7 out of 5 stars
4.7 out of 5
32 global ratings
How are ratings calculated?
To calculate the overall star rating and percentage breakdown by star, we don’t use a simple average. Instead, our system considers things like how recent a review is and if the reviewer bought the item on Amazon. It also analyses reviews to verify trustworthiness.
Top reviews

Élodie Nicoli
5.0 out of 5 stars Will their quest fulfills their heart’s desires...
Reviewed in the United States on 31 March 2020
Verified Purchase
When a woman seeking revenge meets a man wanting justice, can they find a common ground...

This is my first read by the duet of authors, and
as the third book in a series, I had to catch up with the many characters from the two previous stories, and even if this one is a standalone some side characters from the other tales interact with the main protagonists, it takes some time to get acquainted with everyone.
I even googled for some historical informations as England history was not on my cursus, it cleared some parts of the background plot, as grand history is mixed with fiction.

On the romance part, it is a slow burn one, going on the long run. Nothing is rushed between Morrigan and Aidan.
Their first encounter is quite a thing, one for memory with fists and daggers involved. From there, their relationship moves from physical interactions to battle of wits.
I quite loved to see them slowly fall for the other, as much seduced by the brain than the aspect of one another.
Still they have to navigate the Intricate webs of lies, betrayals and deceits surrounding them and only waging to pounce on them.
Aidan is a superhero of the courtrooms, he uses his profond knowledge of human nature to drive people where he wants them to be.
He is clever and open minded, why he does not renege his attraction for Morrigan, if her fiery temper is far from ideal at first for a barrister looking for a political outcome, he does not let it deter it from pursuing her. She is the woman he wants and he uses his praetorian talent to woo her.
Morrigan is a woman of many layers, she rebuilt herself as a stronger woman, one to attack first and question later. She refuses to ever be again a victim. Her past wound is still raw, it is at the root of her attitude. I loved she gave herself the strength to rise from her ashes. Yet, the past always lingers at the border and until she confronts it in the face, she will still be a prisoner of her own fear, mind and scars. Despite her mistakes, she braves her worst nightmares and refuses to cower when threatened of exposure.

I do not know how narrated are the other romances by this duet but here I felt like I was watching a movie unfolding before me, with actions, many protagonists playing their own part, a driving plot and a romance brewing slowly as a conducting wire.
4.5 stars for this tale of resilience and faith.

I was granted an advance copy by the publisher St Martin’s Paperbacks through Netgalley.
I purchased my own. Here is my true and unbiased opinion.
Read more
2 people found this helpful
Report abuse

Pamela R Mitchell
5.0 out of 5 stars Wonderful Scottish historical romance
Reviewed in the United States on 4 April 2020
Verified Purchase
A wonderful Scottish historical romance and perfect ending to the Royal Highlander series with complex characters and a story that kept me glued to the book from beginning to end with twists and turns, ups and downs, Scottish pride, a Highland romance and so much more. I loved the instant attraction and slow-burn romance between rebel Morrigan Drummond and barrister Aidan Grant. If you enjoy well-crafted historical romance, don't miss "Highland Sword". I received an advance reader copy of this book from the publisher via NetGalley and am voluntarily leaving my review.
Read more
Report abuse

Cbarnett
5.0 out of 5 stars Determined to win
Reviewed in the United States on 1 April 2020
Verified Purchase
This was a great read and is third book in series and I recommend them all. I absolutely enjoyed reading Aidan's and Morrigan's story. Morrigan past comes face to face with her at last and she is out for revenge. But that is until a handsome lawyer determined to protect his witness stops her. They butt heads but soon they come to an understanding and Morrigan is determined to keep her distance from Aidan. However Aiden has a different plan for them and is determined to when her over.

This was a fun and entertaining read. I received this book from Netgalley for an honest review.
Read more
One person found this helpful
Report abuse

Gloria U.
5.0 out of 5 stars Beautifully written
Reviewed in the United States on 2 April 2020
Verified Purchase
Please keep writing these wonderful stories. I could not put it down. Humorous, sad at times, and beautifully written. I highly recommend you all her books.
Read more
One person found this helpful
Report abuse

Kindle Customer
5.0 out of 5 stars Morrigan and Aiden
Reviewed in the United States on 13 April 2020
Verified Purchase
I always enjoy May McGoldrick's books. Their characters get themselves into terrible situations that they manage to somehow come around right. The story twists and turns so you can't put it down.
Read more
One person found this helpful
Report abuse
See all reviews
Back to top
Get to Know Us
Connect with Us
Make Money with Us
Let Us Help You
EnglishChoose a language for shopping.
© 1996-2022, Amazon.com, Inc. or its affiliates