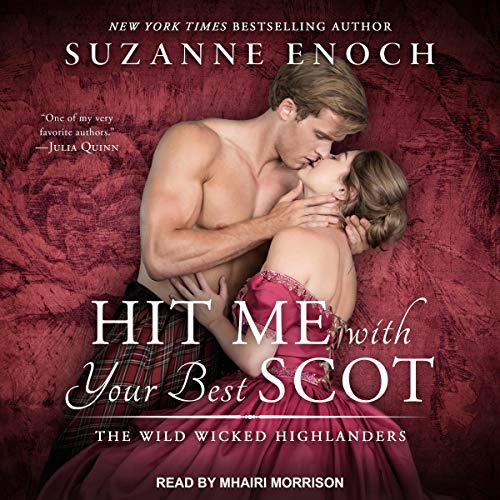 The MacTaggert brothers have one task: Find English brides or lose their land!

Coll MacTaggert, Viscount Glendarril, is a big, brawny Highlander who doesn't like being told what to do - not even by his exasperated English mother who is determined to see her eldest son wedded and bedded. However, when he comes to the rescue of an irresistibly beautiful woman, Coll discovers that he may have found his perfect match....

The challenge isn't that Persephone Jones is famous, wealthy, independent, and smarter than anyone he knows. The problem is that she isn't interested in marrying any man - especially not a hot-headed Scot - even if he is the only man who seems to understand who she really is even when she's not sure herself. When Coll learns that Persephone is actually a lady-in-hiding and someone is willing to kill her for what she stands to inherit.... Well, Coll has never been one to turn down a fight. When hearts are involved, nothing comes between a Highlander and his lady.

Read more
©2021 Suzanne Enoch (P)2021 Tantor
Previous page
Next page
By completing your purchase you agree to Audible’s Conditions Of Use Amazon's Privacy Notice.
Sold and delivered by Audible, an Amazon company

4.5 out of 5 stars
4.5 out of 5
785 global ratings
How are ratings calculated?
To calculate the overall star rating and percentage breakdown by star, we don’t use a simple average. Instead, our system considers things like how recent a review is and if the reviewer bought the item on Amazon. It also analyses reviews to verify trustworthiness.

L. Trim
3.0 out of 5 stars Annoying Inaccuracies
Reviewed in the United Kingdom 🇬🇧 on 27 December 2021
Verified Purchase
Ms Enoch's story lines are ok, this is after all fiction, but she really needs to figure out what actually went on in England and Scotland at the time in which her stories occur. Of the three brothers in this series, two of their names are Irish but the men are Scottish. Aden is Irish for Aidan, and Niall is Irish for Neal. She has godawfully painful pretend Scottish accents for her men. It makes me cringe when reading the words. She does not seem to pay any heed to dowries and jointures, or what footmen actually do, and uses American words in lieu of English words. I suppose if you are in the USA you would not notice these inaccuracies, but I am English and I do. She also, quite annoyingly, ends her tales about the time that marriage is in the offing, and unlike most other authors in this genre, does not provide an epilogue. It is frustrating to read her novels.
Read more
Report abuse

S. Atkinson
4.0 out of 5 stars Another good read
Reviewed in the United Kingdom 🇬🇧 on 2 May 2021
Verified Purchase
Very enjoyable end to the series with yet another likeable MC.
Read more
Report abuse

Edith Prisiak
5.0 out of 5 stars # 3 of a trilogy
Reviewed in Canada 🇨🇦 on 14 March 2021
Verified Purchase
This is a great story, a fitting end to the family stories.
Read more
Report abuse

TracyJane
5.0 out of 5 stars 4.5 stars
Reviewed in the United States 🇺🇸 on 9 February 2021
Verified Purchase
Thanks to an agreement his estranged parents made 17 years ago, Coll MacTaggert, Viscount Glendarril and heir to the Earl Aldriss, along with his two brothers – must marry an Englishwoman before their sister Eloise marries in a few weeks or their mother will no longer fund their Scottish estate. Originally the brothers planned to arrive in London and wreak havoc, thinking that their mother would back down, but grossly underestimated her and now that his brothers have found love, Coll has no choice but to find a bride – but he will do so on his own terms and will not let the countess pick his bride! He is escaping her latest matchmaking attempt when he meets Mrs. Persephone Jones, the lead actress at the Saint Genesius Theatre, and is immediately intrigued, and even though Coll knows that an actress is not a suitable choice for a wife, he can’t seem to walk away. And when he protects her from an unwanted suitor he decides to take the position of her protector – at least until he finds a wife.

Persephone has secrets and has been hiding in plain sight for eight years, she knows getting involved with Coll is a mistake and could potentially expose her, but there is something about him that touches her like no one ever has, and even knowing he needs a bride, a position she could never fill, she can’t seem to send him away. She knows their time together is limited and even offers to help him find a bride and justification for spending time with him in exchange for his protection, a position he happily agrees to. Coll plans to enjoy his time with her and even tells his mother he is going to marry her to annoy her and to give him time to find a bride without her meddling. But after yet another “accident” almost kills Persephone, Coll realizes two things, one; that someone is trying to kill her, and two; he can’t live without her. Persephone knows the time has come to tell Coll the truth and wonders if she is brave enough to face her past so she can have a future with the man she has come to love.

This was a great story, well-written and fast-paced, with wonderful characters and a well-plotted “whodunit”. Of the three brothers, I think Coll is my favorite, I loved his protective nature and his willingness to let Persephone be herself –Sigh, he is just amazing. The story has so much to offer: secrets, scandal, steamyish love scenes, a well-executed mystery, cameos from previous characters, surprises, a strong likable heroine, great secondary characters, and a hard-won HEA. What kept this from being a five-star book is the fact that it is the last book in the series and it ended with some unanswered questions and no epilogue. I wanted to know what happened with his parents and would have liked a glimpse into the future with all three brothers, unfortunately, that did not happen, so I am left to wonder and feel a bit cheated. Even still, I really enjoyed this story and would happily recommend the title.

*I am voluntarily leaving a review for an eARC that I requested and was provided to me by the publisher. All opinions are my own *
Read more
7 people found this helpful
Report abuse

Élodie Nicoli
5.0 out of 5 stars A wonderful last in a series
Reviewed in the United States 🇺🇸 on 9 February 2021
Verified Purchase
Will their differences be too much for a future together ...

This story began as a lark, the big bad wolf hiding from London’s debutantes.
I thought Coll would be quite brawny but outside that, I had not much ideas, looking for a bit of fun on his side, all the while on a quest to find the one woman he could tolerate to marry to fulfill his part in the silly pact his parents signed some two decades ago.
I early decided I was not fond of him. Sure he is fun to listen to but his view is rather one sided, with all the sassenachs he wants to send to hell. But I believe it was my own garbled opinion, as I had been a bit disappointed after the last book, I did not want to put my hopes too high.
It was very wrong from me. Because I quickly saw how great Coll he is.
Whether I thought him only after a bit of a skirt just for fun, his straightforward personality redeemed him quickly in my opinion as not once did he lie nor force his way. He is what he presents to the world plus many more thing like loyal, honorable, heroic, educated and smart not the lout London’s society sees in this man who plays no game. He is no predator waiting to pounce on its prey, he is a protector, he fights to defend, not to attack.

Persephone is a character full of shadows and secrets. Why she is unsettled, she senses he can be her downfall when she longs for salvation.
While I did not like that because the heroine is an actress, she appears as game for more, a little better than a prostitute, it was how things were for very long.
Yet while she keeps her past skeletons well hidden, the more she gets to know Coll, the more she falls for this man who tells no lie, who does as he says and who sees her despite her mask. She achieved a great task for a woman alone in the world, harmed only with her talent, she dug her way on top of the scale. She learned whom to associate with, how to navigate among the crowd and how to protect herself.
Until it is not enough because someone is after her and she might need some outside her close circle help. Maybe a sincere highlander. This how she finds herself entangled with a determined mountain man who will crumble the walls she has built around her.

I so loved they discuss and say what they think and believe, there is no game between them. They voice their feelings and do not cheat.

I have one bad thing to say, Where Is The Epilogue!!!!
If it is the last in the series, there should have been one last scene to tie all the knots.
Thus the 4.75 stars.