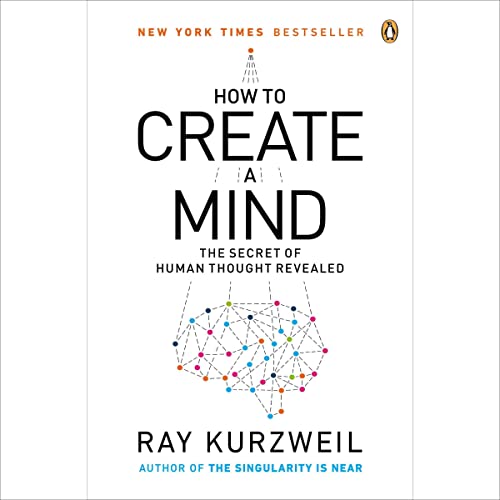 How to Create a Mind: The Secret of Human Thought Revealed

Ray Kurzweil is arguably today’s most influential—and often controversial—futurist. In How to Create a Mind, Kurzweil presents a provocative exploration of the most important project in human-machine civilization—reverse engineering the brain to understand precisely how it works and using that knowledge to create even more intelligent machines.

Kurzweil discusses how the brain functions, how the mind emerges from the brain, and the implications of vastly increasing the powers of our intelligence in addressing the world’s problems. He thoughtfully examines emotional and moral intelligence and the origins of consciousness and envisions the radical possibilities of our merging with the intelligent technology we are creating.

Certain to be one of the most widely discussed and debated science books of the year, How to Create a Mind is sure to take its place alongside Kurzweil’s previous classics which include Fantastic Voyage: Live Long Enough to Live Forever and The Age of Spiritual Machines.

4.4 out of 5 stars
4.4 out of 5
823 global ratings
How are ratings calculated?
To calculate the overall star rating and percentage breakdown by star, we don’t use a simple average. Instead, our system considers things like how recent a review is and if the reviewer bought the item on Amazon. It also analyses reviews to verify trustworthiness.
Top reviews

Anugraha Sinha
4.0 out of 5 stars Like a sine wave
Reviewed in India 🇮🇳 on 28 December 2017
Verified Purchase
Ray Kurzweil is a celebrated researcher and technology evangelist. This is an established fact. This book is an example of his evangelism, belief and hope to build a system that can surpass human intelligence.

The book starts on a very interesting description of how human brain has evolved by learning to challenge the obstacles put forward, whether for survival or in the form of age old traditions. It describes the mindset of Einstein as to what lead to the discovery of special theory of relativity and other such inventions by other scholars. It also describes the ideology of Alan Turing and his work to build the first computing machine along with the fundamentals it laid down for today's science of AI and computers as a whole. The writer's vast knowledge about computing, its history, understanding and hold on the subject is highly appreciable and a class apart.

It moves on to describe at length the structure of human brain, the pitched theory of its working in the form of algorithms such as PRTM (pattern recognition theory of mind) and LOAR (Law of Accelerated Return).
Further on, it also projects why unsupervised learning aspects of clustering and reinforced learning in the form of HHMM (hierarchical hidden Markov model) as the central algorithm of brain functioning. Uptill this point the book is gripping, and the reader is submissive of the writer description and knowledge.

However, this is the point when you reach the 180 degree of the sine wave. The writer goes ahead in the direction of answering more complex questions like consciousness of brain and links it to vastly different outlook. This is when the book dips to the lows due to loss of flow and repeated axioms (not proofs but only quoted opinions from other different writers, linguistics and philosophers)

Nonetheless, the articulation on faith and the divide between Western World and Eastern world on the subject of faith is an interesting read, and here is where the sine wave tries to come up again. As expected it dies out towards the end, leaving the reader with quite many unanswered questions and thoughts, which may be a reflection of writer's mind also.

If you are looking for a head start on the subject of brain mapping, it's structure, working and algorithmic functioning, then definitely it is worth the read.
But as the writer himself conveys at different places, the human mind is much more than simple algorithms. Machines of the future have to challenge to surpass for them to be bigger than the greatest evolution of nature.

An important point to be noted is that the writer has taken approximations and statistical hypothesis about the neocortex and its constituent neurons to an all together different level. So much of approximation and hypothetical analysis does make the reader skeptical about the truth value of such axioms.
Read more
19 people found this helpful
Helpful
Report abuse

Mister Zee
1.0 out of 5 stars Contains an example of animal cruelty
Reviewed in India 🇮🇳 on 10 July 2022
Verified Purchase
Ray Kurzweil is attempting to build AI by reverse-engineering the human brain and then copying its workings in software. In other words, Cheating.
I got to know a little bit about the structure of the brain itself, so I guess reading this book DID improve my knowledge in some way.
However, towards the end, Kurzweil talks about "damage-inflicting brain imaging" tests on animals, ie. they destroyed the brain of an animal in order to study it. Which is ABSOLUTELY *HEINOUS*!! He writes the sentence in cold blood, as though HIS research is worth more than the life of an innocent being. I find this absolutely Disgusting.
Read more
Helpful
Report abuse

Achyut Ghosh
4.0 out of 5 stars is a wonderful and fascinating book
Reviewed in India 🇮🇳 on 14 August 2015
Verified Purchase
How to Create a Mind.. is a wonderful and fascinating book. Ray Kurzweil has taken every pains to make it readable for all kinds of reader, However to my perception the reader must have a scientific bent of mind to appreciate the book in full. I was inspired by the book and immediately I purchased 'The Singularity is Near' by the same author through Amazon. I ordered two more copies of the How to Create a Mind .. through Amazon for presenting to my friends, however the order did not materialize.
Read more
One person found this helpful
Helpful
Report abuse

Sandeep Bhasin
3.0 out of 5 stars Decent one-time read
Reviewed in India 🇮🇳 on 27 August 2020
Verified Purchase
First couple of chapters are amazing and will hold you but slowly you would lose the interest as in some portion, it becomes repetitive.
Read more
Helpful
Report abuse

Anish
4.0 out of 5 stars Good
Reviewed in India 🇮🇳 on 9 September 2019
Verified Purchase
This is good book who have knowledge about machine learning
Read more
Helpful
Report abuse

Amazon Customer
1.0 out of 5 stars Self indulgent, unimaginative, and unoriginal
Reviewed in the United Kingdom 🇬🇧 on 29 January 2019
Verified Purchase
Throughout the book, Kurzweil switches between asserting very general, accepted ideas which have been the consensus in such domains as neuroscience (while hinting that they are his own thinking), and confidently asserting very general, speculative and unsubstantiated ideas, then attaching a fancy name to them. His PRTM (pattern recognition theory of mind - sigh), is based on the idea that the algorithm used by the neocortex in processing is uniform across the entire structure. He provides no evidence for this besides some silly calculations about the informational content of the genome. This is an area about which very little is known but the fact that the cellular structure of cortex varies in a way that is visible to the human eye really should be enough to give him pause. Worse still is that his "ideas" are almost exactly the same as those of Jeff Hawkins (just presented in a more arrogant way).
A very disappointing read, please don't waste your time with it.
Read more
26 people found this helpful
Report abuse

Judyta Szacillo
4.0 out of 5 stars Beautiful visions, rather unrealistic
Reviewed in the United Kingdom 🇬🇧 on 27 November 2017
Verified Purchase
Compared to “Surviving AI” by Colum Chase, which was the first book I’ve read on the subject, this is a very challenging read. I confess I skipped many pages, unable to follow the specialist lingo and associated equations.
Nevertheless, I did manage to gain some – though very shallow – understanding of what those Silicon Valley dreamers are up to. Ray Kurzweil certainly is a dreamer. He ponders the questions of consciousness, free will, and identity, in order to convince us that, whatever shape or form AI takes when it arrives, it is not going to be fundamentally different from what we are now – just smarter, more efficient, and more durable. He seems to be fully convinced that it will be in a kind of symbiosis with us, or an extension of us, and that it is our destiny to infuse the whole universe with our post-biological human intelligence. I was very glad to see those dreams written down by someone else, someone who actually can and does pursue them actively. I share that dream, but I don’t have as much confidence in it. Probably that’s why Kurzweil devoted his life to it, and I’m just a sceptical observer!
Read more
6 people found this helpful
Report abuse

George Powell
4.0 out of 5 stars Very interesting book, doesn't give enough away
Reviewed in the United Kingdom 🇬🇧 on 20 September 2013
Verified Purchase
This book was given the title it has to sell more copies. Kurzweil doesn't reveal any secrets and doesn't describe any methods that haven't been around for a long time in academia and industry already.

As a software engineer working on pattern recognition systems I bought this book as soon as it was available, the book gave me a lot of ideas and I'm very happy I bought it. The central thesis seems to be the same as Jeff Hawkins' On Intelligence - obviously a big influence for Kurzweil - but with a focus on developments since On Intelligence was published.

Kurzweil got employed at Google very shortly after publishing this book so he could lead a team to create the mind that he's described. He's said in interviews that he left some details out of the book because he didn't want to give too much away.

Overall a good read that will provoke a lot of constructive thought, but don't expect for anyone to actually build a mind based on just this book.
Read more
16 people found this helpful
Report abuse

J. V. H. Urbina
3.0 out of 5 stars Meh!
Reviewed in the United Kingdom 🇬🇧 on 2 June 2019
Verified Purchase
Ray Kurzweil has a massive ego, and when he's not talking about himself or his asserted predictions or the companies he's founded he might speak about something interesting about neuroscience or AI. All in all, this book has some interesting ideas and some that sound absurd (e.g. chapter 9).
Read more
5 people found this helpful
Report abuse

George Coombs
5.0 out of 5 stars An understanding of artificial intelligence
Reviewed in the United Kingdom 🇬🇧 on 3 October 2021
Verified Purchase
A detailed challenging and thought provoking book. It raises serious questions regarding how 'A.I.' is progressing toward a state of total human control when A.I. is patched into the brain, and, it seems to me at any rather like a move toward total control of the many by the few especially the prominent'few' in Silicone Valley where the suthor Ray Kurzweil is a prominent figure.
Read more

5.0 out of 5 stars An understanding of artificial intelligence
Reviewed in the United Kingdom 🇬🇧 on 3 October 2021
A detailed challenging and thought provoking book. It raises serious questions regarding how 'A.I.' is progressing toward a state of total human control when A.I. is patched into the brain, and, it seems to me at any rather like a move toward total control of the many by the few especially the prominent'few' in Silicone Valley where the suthor Ray Kurzweil is a prominent figure.
Images in this review