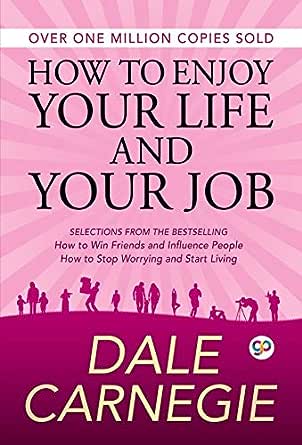 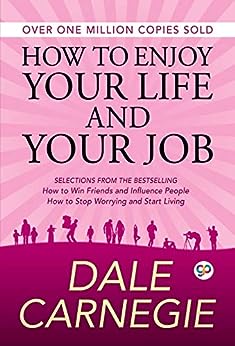 How to Enjoy Your Life and Your Job Kindle Edition

Dale Carnegie (1888–1955) was an American writer and lecturer and the developer of famous courses in self-improvement, salesmanship, corporate training, public speaking and interpersonal skills.
He was born in an impoverished family in Maryville, Missouri. Carnegie harbored a strong love and passion for public speaking from a very early age and was very proactive in debate in high school. He went to the Warrensburg State Teachers College and later onwards became a salesman for Armour and Company in Nebraska. He also moved to New York in the pursuit of a career in acting and gave classes in public speaking at the Young Men's Christian Association.
During the early 1930's, he was renowned and very famous for his books and a radio program. When 'How to Win Friends and Influence People' was published in 1930. It became an instant success and subsequently became one of the biggest bestsellers of all time. It sold more than 10 million copies in many different languages. He also began work as a newspaper columnist and formed the Dave Carnegie Institute for Effective Speaking and Human Relations, with several branches globally.
Carnegie loved teaching others to climb the pillars of success. His valuable and tested advice was used in many domains and has been the inspiration of many famous people's success. One of the core ideas in his books is that it is possible to change other people's behavior by changing one’s reaction to them. The most famous and cited maxims in the book are "Believe that you will succeed, and you will," and "Learn to love, respect and enjoy other people." --This text refers to an alternate kindle_edition edition.

4.3 out of 5 stars
4.3 out of 5
261 customer ratings
How does Amazon calculate star ratings?
Amazon calculates a product's star ratings based on a machine learned model instead of a raw data average. The model takes into account factors including the age of a rating, whether the ratings are from verified purchasers and factors that establish reviewer trustworthiness.

Amazon Customer
5.0 out of 5 stars 10 pages a day keep negative thoughts away.
Reviewed in India on 21 April 2017
Verified Purchase
One of the best book I have read.
Everyone give 20 -25 minutes of day for reading a book. It will help in thinking and making a good managed life.

Minouti Kharbade
1.0 out of 5 stars Bad Printing and Paper quality
Reviewed in India on 29 August 2017
Verified Purchase
The printing quality of the book is not good, everything is blurred. Also the paper quality is not good, so while reading you see the black lines from the backside of the page. Adding too much stress while trying to read this book
Read more
2 people found this helpful
Helpful
Comment Report abuse

Amazon Customer
5.0 out of 5 stars Marvellous Book
Reviewed in India on 4 October 2019
Verified Purchase
The contents are wonderfully arranged and nicely conveyed. You will not remain the old person after you complete reading the book and start applying the techniques in your everyday life.
Read more
One person found this helpful
Helpful
Comment Report abuse

Elangovan Srilinga Gnana Pragasam
2.0 out of 5 stars Very old theories
Reviewed in India on 27 May 2020
Verified Purchase
I am sorry and this book did not inspired me though I glanced though completly. Not so good. Got bored. No big ideas for the modern work challenges
Read more
Helpful
Comment Report abuse

Anushree
5.0 out of 5 stars Good Read !!
Reviewed in India on 30 June 2020
Verified Purchase
The book has various real life inspiring stories.
I would suggest this book.
2 chapters a day keep all the negative thoughts away !!
However, the book "How to stop worrying and start living" from the same author has similar contents.
I bought the other book unknowingly.

R
1.0 out of 5 stars E-book quality is bad
Reviewed in India on 4 July 2020
Verified Purchase
Had to discontinue reading because of the number of mistakes. Never seen such poor quality kindle version.
Read more
Helpful
Comment Report abuse
See all reviews from India

paul
5.0 out of 5 stars Five Stars
Reviewed in the United Kingdom on 24 May 2018
Verified Purchase
Very happy, would use seller again.
Read more
Helpful
Sending feedback...
Thank you for your feedback.
Sorry, we failed to record your vote. Please try again
Report abuse

Alicia Alvarado
5.0 out of 5 stars interesting
Reviewed in the United States on 16 December 2019
Verified Purchase
Made me see a few things differently. I've been having a hard time at my job with a new boss but reading this book makes me feel better about working with a difficult boss.
Read more
Helpful
Sending feedback...
Thank you for your feedback.
Sorry, we failed to record your vote. Please try again
Report abuse