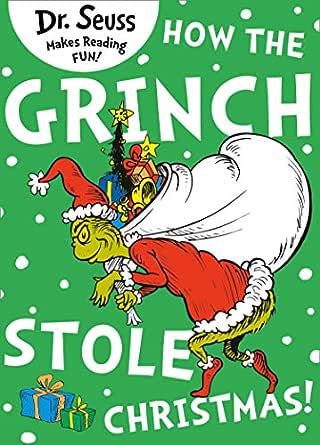 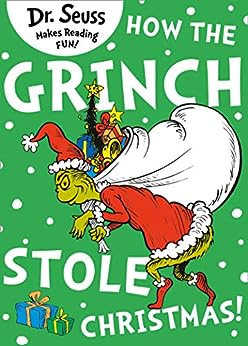 You're a mean one, Mr. Grinch. But are you rotten enough to ruin Whoville's Christmas Whobilation this year, even after Cindy Lou Who nominates you to be the Cheermeister of the event? Based on Dr. Seuss's wacky and wonderful classic picture book, How the Grinch Stole Christmas and the motion picture screenplay of the same name, this novelization elaborates on the story of a holiday gone awry. Little Cindy Lou Who, her cheerfully dopey dad, Lou Lou Who, her semi-delinquent teenage brothers Stu and Drew Lou Who, the Martha Stewartesque Martha May Whovier, and the nastiest, most cynical, evil-hearted Grinch around star in this Christmas comedy. Seventeen color photos from the film are included. (Ages 8 to 12) --Emilie Coulter --This text refers to an out of print or unavailable edition of this title.

When the mean old Grinch hatches a fiendish plot to steal Christmas from the citizens of Who-ville, he's in for the surprise of his life!
This gift set celebrates the 50th anniversary of the Grinch and his heart that swells three sizes for Christmas!
Containing a mini hardback edition of How the Grinch Stole Christmas! and a soft Grinch toy.

Praise for Dr. Seuss:
“[Dr. Seuss] has…instilled a lifelong love of books, learning and reading [in children]” The Telegraph

“Dr. Seuss ignites a child’s imagination with his mischievous characters and zany verses” The Express

“The magic of Dr. Seuss, with his hilarious rhymes, belongs on the family bookshelf” Sunday Times Magazine

“The author… has filled many a childhood with unforgettable characters, stunning illustrations, and of course, glorious rhyme” The Guardian

Praise for And To Think That I Saw it On Mulberry Street:
“The cleverest book I have met with for many years. The swing and merriment of the pictures and the natural truthful simplicity of the untruthfulness.”
Beatrix Potter, author of The Tale of Peter Rabbit

slipcased edition of the beloved Seuss holiday classic will be at the top of everyone's Christmas gift list this year. --This text refers to the hardcover edition.

With his unique combination of hilarious stories, zany pictures and riotous rhymes, Dr. Seuss has been delighting young children and helping them learn to read for over fifty years. Creator of the wonderfully anarchic Cat in the Hat, and ranked among the UK’s top ten favourite children’s authors, Dr. Seuss is a global bestseller, with over half a billion books sold worldwide.

"My son is partial to this brand-new edition, but he cannot have it, it is all Mama's. It contains everything a Grinch addict like myself could possibly want, including info on his international appeal..., details about the route Dr. Seuss (aka Theodor Geisel) took in creating the Grinch (he wanted to combine Santa, his reindeer, the Stork, the Sandman and the Boogeyman -- why mess around with so many characters when one would do?), and background on how Chuck Jones storyboarded the book. The old drawings are spectacular."

Written by uber-Seuss-ologist Charles D. Cohen, the essay features wonderful illustrations and all sorts of groovy Grinch memorabilia... A fun look behind the scenes of one of the all-time great children's classics. (A) [Highest rating]

Written by uber-Seuss-ologist Charles D. Cohen, the essay features wonderful illustrations and all sorts of groovy Grinch memorabilia...A fun look behind the scenes of one of the all-time great children's classics. (A) [Highest rating] --This text refers to an out of print or unavailable edition of this title.
Read more

4.9 out of 5 stars
4.9 out of 5
10,527 global ratings
How are ratings calculated?
To calculate the overall star rating and percentage breakdown by star, we don’t use a simple average. Instead, our system considers things like how recent a review is and if the reviewer bought the item on Amazon. It also analyses reviews to verify trustworthiness.

Brigi Dias
5.0 out of 5 stars Beautiful hardcover edition!!
Reviewed in India on 8 July 2019
Verified Purchase
Ordered a used hardcover copy from dealstar and it can well within delivery date and in excellent condition ! Very happy with the packaging delivery and the book. Been wanting to collect this Lovely timeless Dr Suess classic and so happy I got it!!
Read more
2 people found this helpful
Helpful
Report abuse

MS
5.0 out of 5 stars Good read
Reviewed in India on 29 January 2019
Verified Purchase
I got it as a prelude before taking daughter to the Grinch movie. We love reading this even more after watching the movie. Great vocabulary building tool and a captivating story. Good read, recommended for 6 plus years.
Read more
One person found this helpful
Helpful
Report abuse

Victoria
5.0 out of 5 stars For all Christmas lovers
Reviewed in India on 22 March 2019
Verified Purchase
Who doesn't love Grinch?? Beautiful illustrations and beautiful rhymes.
Read more

OnlineFan
5.0 out of 5 stars A Dr. Seuss classic!
Reviewed in India on 17 July 2014
Verified Purchase
This is a must-have for any Dr. Seuss collection! The plot, the characters and the inimitable Dr. Seuss' style - make it a wonderful 'read-again' ..again and again! Amazon's packaging and delivery ensure the book reaches in mint condition.
Read more
Helpful
Report abuse

R.War
5.0 out of 5 stars The Grinch..dr seuss
Reviewed in India on 23 November 2019
Verified Purchase
Not disappointed at all
Read more
Helpful
Report abuse

Msing
3.0 out of 5 stars Expected it to be more vibrant for kids
Reviewed in India on 11 January 2020
Verified Purchase
Since it is a book for kids it could have been more colourful and attractive. Otherwise good read for kids
Read more
Helpful
Report abuse
See all reviews

Spookydooky
5.0 out of 5 stars Love the Grinch books
Reviewed in the United Kingdom on 31 December 2020
Verified Purchase
My poor daughter caught covid 19 days before Christmas so we wanted something to cheer her up. She had to isolate along with 12 of her college friends so she kept saying she was the grinch.
As this book is called how the grinch stole Christmas we bought her it, wrote a little cheer her up passage in the front and everyone signed it.
She has always loved the grinch films so she loved this book anyway.
The cover is glossy and the book is a nice shortish bedtime read. If you love the grinch films you'll love the books too.
It's an excellent price and a book that she'll keep forever now. A book to remember how she might have stolen christmas for a few but she didn't spread anything to the many either.
Read more
One person found this helpful
Report abuse

Supergirl2022
5.0 out of 5 stars Don't be a Grinch when you find out it's a pocket version!
Reviewed in the United Kingdom on 24 October 2018
Verified Purchase
The Grinch has always been a firm family favourite and this version has found its way into our lives. It is important to note that this is a pocket sized version of the book but it's by no means miniature and the text is not unreasonably small. The book is hardback with a dust jacket and is just the right size for younger children.
Read more
7 people found this helpful
Report abuse

Charlies Angelz
3.0 out of 5 stars Detailed drawings, excellent story
Reviewed in the United Kingdom on 10 January 2021
Verified Purchase
Lovely book, the cover is paper back but thick. Each page is has detailed pictures which my daughter enjoyed looking at. The pictures are amazing, lots of thought out in to them.
The story it’s self is great, my daughter is needed with the grinch so made the perfect Christmas book for her Christmas Eve box!
Well worth the buy🥰
Read more
3 people found this helpful
Report abuse

Larissa Parlabean
5.0 out of 5 stars It's great
Reviewed in the United Kingdom on 29 November 2019
Verified Purchase
Love it love it love it! I had never read the Grinch, only seen the film. But I absolutely love this book. I've read it to my baby three times now in a week because I just love it so much! The story is fun and pleasant to read, the rhyming flows really well. The pictures are very effective too, they are black sketches but coloured in with red so they stand out well to young babies. My four month old is very engaged with it.
Read more
3 people found this helpful
Report abuse

Mrs P M Harvey
1.0 out of 5 stars Disappointing inaide cover
Reviewed in the United Kingdom on 26 November 2018
Verified Purchase
I was really disappointed with this book. My granddaughter was so excited when she saw the book as she had recently seen the film. The cover is lovely and bright. The inside however is dull with black and white pictures with only a splash of red. Very dull. I don"t get it! Its aimed at young chikdren and needs to hold their attention. The story in itself is quite good but she got bored of looking at it half way through. Usually she has me reading about 5 books in one go.
Read more
3 people found this helpful
Report abuse
See all reviews
click to open popover
Unlimited FREE fast delivery, video streaming & more
Prime members enjoy unlimited free, fast delivery on eligible items, video streaming, ad-free music, exclusive access to deals & more.
> Get started
Back to top
Get to Know Us
Connect with Us
Make Money with Us
Let Us Help You
EnglishChoose a language for shopping.
© 1996-2021, Amazon.com, Inc. or its affiliates