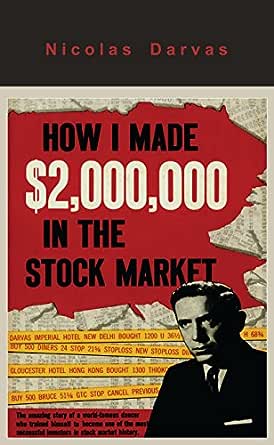 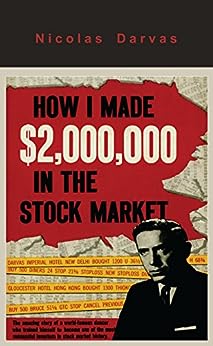 Full facsimile of the original edition, not reproduced with Optical Recognition Software. Hungarian by birth, Nicolas Darvas trained as an economist at the University of Budapest. Reluctant to remain in Hungary until either the Nazis or the Soviets took over, he fled at the age of 23 with a forged exit visa and fifty pounds sterling to stave off hunger in Istanbul, Turkey. During his off hours as a dancer, he read some 200 books on the market and the great speculators, spending as much as eight hours a day studying.Darvas invested his money into a couple of stocks that had been hitting their 52-week high. He was utterly surprised that the stocks continued to rise and subsequently sold them to make a large profit. His main source of stock selection was Barron's Magazine. At the age of 39, after accumulating his fortune, Darvas documented his techniques in the book, How I Made 2,000,000 in the Stock Market. The book describes his unique "Box System", which he used to buy and sell stocks. Darvas' book remains a classic stock market text to this day.

Before emigrating to America, Darvas studied economics at the University of Budapest. Arriving in the US in 1951, Darvas trained with his half-sister, Julia, to be a ballroom dancer, becoming extremely succesful and touring the world by 1956. He discovered investing in 1952, when a Toronto nightclub, unable to pay him in cash, instead paid him with shares. It was on a two-year tour of the world that he initially developed his 'Darvas Box' method of screening stocks - a method of picking stocks based on the stock's price and volume - and later went on to refine this to remove any human element from his trading to susbtantial success. Nicolas Darvas is regarded as one of the best traders in the history of the market and his method, whilst complicated and difficult to master, has been rigorously tested and has been found to be one of the best trading systems yet developed.

Shrikanth S.
4.0 out of 5 stars An enthralling read
23 October 2018
Format: Kindle EditionVerified Purchase
The book is a detailed step by step breakdown of the dealing of Nicholas Darvas in the stock markets of NY and Canada.
He agrees that stock market is a wild bull to tame but he somehow found out an unorthodox method to make it work. His findings are quite logical no matter how unorthodox they may seem to a stick market regular trader. Shows how the mind is the most powerful when it is calm and focussed.

Amazon Customer
5.0 out of 5 stars A must read for all types of investors (not traders)
18 June 2017
Verified Purchase
Good experiences are shared by Nicolas Darvas. This book is more about attitude for investing in market rather than discussing strategies and charts. One must read this after reading Intelligent Investor by Benjamin Graham.
Read more
13 people found this helpful
Helpful
Comment Report abuse

Amit P
4.0 out of 5 stars Masterful
1 September 2019
Format: PaperbackVerified Purchase
Awesome, simple, lucid, clearly articulated and easy to understand. All the above make the book a worthwhile read. After all a professional making an effort to invest his time and energies in the share market and making 2 million DOLLARS is absolutely inspirational. Even making half that amount remains a dream for many in a country like India.
Read more
3 people found this helpful
Helpful
Comment Report abuse

kailash
5.0 out of 5 stars This is very interesting like a crime novel. It is very helpful who want to invest in stocks.
2 November 2017
Format: Kindle EditionVerified Purchase
But before start the book getting little knowledge of stock market functions will make the book more enjoyable and understandable.
Sometimes ordinary people do extraordinary things. Though it was happening on 1950-60s it is applicable even today.

yash nagori
5.0 out of 5 stars Nice book
16 October 2019
Format: HardcoverVerified Purchase
Good book, the author was dedicated to learn about the markets and he spend 8 hours a day doing so and going through some 200 books on stock market, and summed up all of this work in this book,
The books is good, pages are also very good, the publisher house has also organized this book well.

Sahil Shah
3.0 out of 5 stars Relatable and fascinating - a nice read for traders
25 January 2018
Format: Kindle EditionVerified Purchase
A very fascinating account of a trader in the 1950s who used his gut feel to get a grasp in the stock market. A nice simple.book for someone who has had some experience trading. Relatable.
Read more
One person found this helpful
Helpful
Comment Report abuse

Siddharth ji
5.0 out of 5 stars A Story which feels like a fact sheet
15 February 2020
Format: Kindle EditionVerified Purchase
Awesomely crafted, never gets u bored, it's more like a movie, the certain way Darvas advances in market of uncertainty ie. the Stock Market is put simply, mesmerizing. The stock market doesn't tests one's mental strength, rather emotional strength. And along the way Darvas suggests takeaway points for someone who thinks of safely sailing in this sea of money.
Read more
Helpful
Comment Report abuse

Kindle Customer
4.0 out of 5 stars Excellent Read
4 January 2018
Format: Kindle EditionVerified Purchase
Very good book, The author tries to present the fact that we can buy stocks when they are rising. This advise is exactly opposite of market gurus. Author also equally emphasis on stop loss and booking losses.He terms inactivity and staying away from market as key.
Read more
One person found this helpful
Helpful
Comment Report abuse
There are 125 customer reviews and 134 customer ratings.
See all 125 customer reviews
Write a product review

Go to Amazon.com to see all 522 reviews 4.4 out of 5 stars
click to open popover
Unlimited FREE fast delivery, video streaming & more
Prime members enjoy unlimited free, fast delivery on eligible items, video streaming, ad-free music, exclusive access to deals & more.
> Get started
Back to top
Get to Know Us
Connect with Us
Make Money with Us
Let Us Help You
EnglishChoose a language for shopping.
© 1996-2020, Amazon.com, Inc. or its affiliates