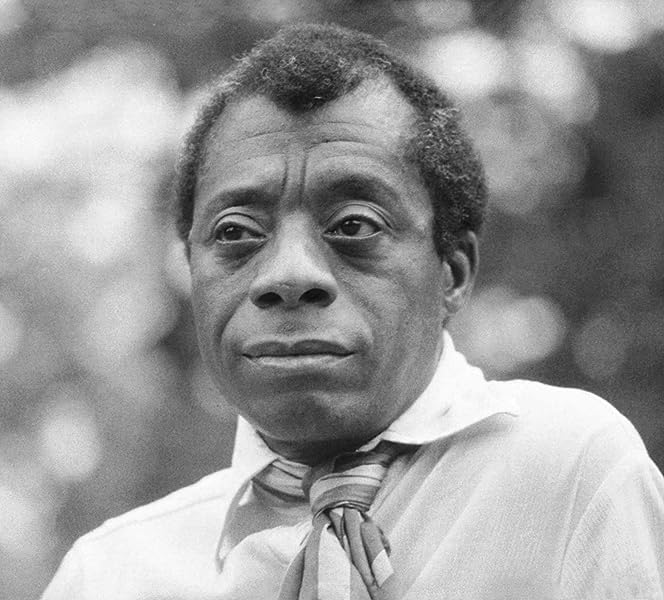 by James Baldwin (Author), Raoul Peck (Author)
4.8 out of 5 stars 2,762 ratings
See all formats and editions
Sorry, there was a problem loading this page. Try again.

Partner Offers (2): Buy 2 get 5% off, Buy 3 or more & get 10% off View products See All
Bank Offer (7): 10% Instant Discount up to INR 1250 on SBI Credit Card Non-EMI Trxn. Min purchase value INR 5000 See All
Cashback: Super Offer: Claim your offer on any product of your choice and save - Click here to claim. Details
No Cost EMI: Avail No Cost EMI on select cards for orders above ₹3000 Details
See 2 more
Pay on Delivery
Free Delivery
10 Days Replacement Only
Amazon Delivered
What is Pay on Delivery (Cash/Card)?
Pay on Delivery (Cash/Card) payment method includes Cash on Delivery (COD) as well as Debit card / Credit card / Net banking payments at your doorstep.
Free Delivery
The product is eligible for Free delivery on your first order in this category. Learn more

The New York Times bestseller based on the Oscar nominated documentary filmIn June 1979, the writer and civil rights activist James Baldwin embarked on a project to tell the story of America through the lives of three of his murdered friends: Medgar Evers, Malcolm X and Martin Luther King, Jr. He died before it could be completed. In his documentary film, I Am Not Your Negro, Raoul Peck imagines the book Baldwin never wrote, using his original words to create a radical, powerful and poetic work on race in the United States - then, and today. 'Thrilling . . . A portrait of one man's confrontation with a country that, murder by murder, as he once put it, "devastated my universe"' The New York Times'Baldwin's voice speaks even more powerfully today . . . the prose-poet of our injustice and inhumanity . . . The times have caught up with his scalding eloquence' Variety 'A cinematic séance . . . One of the best movies about the civil rights era ever made' Guardian 'I Am Not Your Negro turns James Baldwin into a prophet' Rolling Stone
Read more
Previous page
Next page

Born in Harlem in 1924, James Baldwin was a novelist, essayist, play­wright, poet, social critic, and the author of more than twenty books. His first novel, Go Tell It on the Mountain, appeared in 1953 to excellent reviews, and his essay col­lection The Fire Next Time was a bestseller that made him an influential figure in the civil rights movement. Baldwin spent many years in France, where he moved to escape the racism and homophobia of the United States. He died in 1987.

Raoul Peck is a filmmaker acclaimed for his historical, political, and artistic work. Born in Haiti, he grew up in Congo, France, Germany, and the United States. He is currently chairman of the French national film school, La Fémis.

4.8 out of 5 stars
4.8 out of 5
2,762 global ratings
How are ratings calculated?
To calculate the overall star rating and percentage breakdown by star, we don’t use a simple average. Instead, our system considers things like how recent a review is and if the reviewer bought the item on Amazon. It also analyses reviews to verify trustworthiness.
Top reviews

There are 0 reviews and 24 ratings from India

Doc Culbard
5.0 out of 5 stars The reflections of a modern-day prophet
Reviewed in the United Kingdom 🇬🇧 on 3 March 2022
Verified Purchase
During my university student days, I embarked on the venture of trying to read every published novel of James Baldwin. Those were the days of civil rights marches in the USA, demonstrations on colleges campuses, Martin Luther King, the war in Vietnam, and political unrest. I managed to read a selection of Baldwin’s novels, including Go Tell It on the Mountain, Giovanni’s Room, Going to Meet the Man, and The Fire Next Time. Added to this were several of Baldwin’s early essays, including Notes of a Native Son and Nobody Knows My Name.
Baldwin was one of the “essential intellectual voices of his time.” He wrote from his own experiences and was, in the words of one commentator, “one of the most brilliant and provocative, and one of the greatest African-American writers of the 20th century.” Of course, Baldwin did not stop writing when I had completed my studies; he went on to write quite prolifically, as well as address forums and make media appearances. He told stories from his personal experiences, the events of his times, the structures of his society. Some of these stories made it into publication and have joined his earlier works in a three-volume publication by The Library of Congress. This set is now available through Amazon.
One powerful story from his later years was If Beale Street Could Talk, from which was made an intimate, yet powerful, movie. Baldwin’s I Am Not Your Negro was not made into a typical movie, indeed, it was not a typical essay or novel. The book under review contains extracts from writings that James Baldwin penned about three of his friends, Medgar Evers, Malcolm X, and Martin Luther King, Jr. Baldwin’s aim was to tell the “story of America through the lives of these three friends”, each of whom was murdered for, amongst other reasons, their beliefs and strength to act on them.
Baldwin died before he could complete a book from his notes on the above. It remained for Raoul Peck to imagine and put into print the book that Baldwin never wrote. Peck combined his own experiences and reflections on political and cultural mythology with those of James Baldwin. Peck put Baldwin’s notes into order, gave them categories and, therefore, prominence and power. As Peck himself says, Baldwin enabled him to connect the dots, provided him with the ammunition, the words, the voice, and the rhetoric, to say something about his own Haitian story as well as that of the modern USA and its legacy of slavery.
Peck has melded Baldwin’s notes into a framework, a form, a script that tells a coherent story, always seeking to remain true to Baldwin’s words and work. The chapters of the book are short, their headings usually of one word, their effect is to present James Baldwin as a modern-day prophet. History does not stop, it happens. We carry history with us, and some of us, those with the will and strength of a James Baldwin, help to explain it.
I look forward to viewing, and reviewing, the movie that Raoul Peck made from the notes of this American native son. In the meantime, the book is an easy read, well worth the effort to read, and valuable in its narrative essence. Read it and understand.
Read more
2 people found this helpful
Report abuse

Michelle
2.0 out of 5 stars 2 stars
Reviewed in the United Kingdom 🇬🇧 on 11 July 2019
Verified Purchase
This book is basically the notes, essays, letters etc etc that James Baldwin had planned to pull together for his book 'Remember this House' which remained unfinished at the time of his death.

These notes where then pulled together by Raoul Peck and resulted in the I Am Not Your Negro documentary.

It's a very quick read, for me I would prefer to watch the documentary, and I will do, however it did slightly build upon the Martin Luther King / Malcom X book that I read last year so it was worthwhile.
Read more
4 people found this helpful
Report abuse

chigal
5.0 out of 5 stars Very much needed at this time
Reviewed in the United Kingdom 🇬🇧 on 2 August 2020
Verified Purchase
With all going on in the USA right now (re- police profiling and killing of black people) and the resulting worldwide movement that have sprung and gained momentum, this book sheds some light that will help people have the necessary conversations around race. Evil continues because good people remain silent! Black, brown, white, red, whatever colour (shouldn’t really be saying this as we’re the human race and shouldn’t be defined by colour) , get yourselves some books on the subject.
Read more
2 people found this helpful
Report abuse

Picasso’s cat
3.0 out of 5 stars Powerful and relevant, but a very brief book.
Reviewed in the United Kingdom 🇬🇧 on 5 July 2020
Verified Purchase
As a Baldwin fan, I was eager to read more about the history of Black Americans, and although this has some relevant and very timely messages, it is barely more than a slim compilation of notes, seemingly random in sequence - it took about an hour to read. As such, I’m sure the film will prove a better bet for your money, as the intent of the project is good. Reading any one of Baldwin’s Books will give an insight into the historical violence, injustice and inhumanity that many black people in the US have been, and still are, forced to endure.
Read more
2 people found this helpful
Report abuse

Jonathan Nicholas - Author
5.0 out of 5 stars A good introduction to this author
Reviewed in the United Kingdom 🇬🇧 on 11 January 2020
Verified Purchase
The author states he loved John Wayne films when he was young; until, that is, he realised he was the Indians. It’s a different perspective on life & America, from a black man’s point of view. It’s a short easy read & so a great introduction to this author, as recommended to me by someone on Twitter. Recommended.
Read more
2 people found this helpful
Report abuse
See all reviews