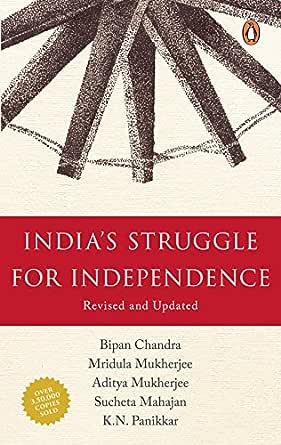 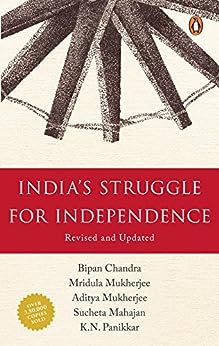 read it cover to cover. In the midway I realized that it is truly a pro-congress or pro-nationalist book. But, then also I proceeded. There are times, when it tries to justify the stand of Congress on critical matters. A reader must read it with this 'bias' in mind of authors because as already been said by others that most of the authors are from JNU and in some way or other are associated with different government institutions. However, it is a good read in terms of it's style of presenting history. In fact, one can easily find that history is not merely about memorizing the dates, it is more about seeing the undercurrent of thoughts which were determinant in making that date historical. So in all, I would suggest it is for a mature reader not an amateur one. --Gyan Vikas Feb 15, 2012

an extract from the book goes "the end of 1907 brought another political trend to the fore. the impatient young men of bengal took to the path of individual heroism and revolutionary terrorism( a term we use without any pejorative meaning and for want for another term). I for one am at a loss as to how a renowned group of 5 historians are not able to find a proper term for our freedom fighters. well let me suggest some - "radical extremists", "ultra extremists" and i am sure that if these wont fit one can easily come up with a little more reverent term than "revolutionary terrorism" interestingly in the chapter on freedom of press the authors mention how people from press were forced to write their content in such a way as to not incur the wrath of the administration. it seems to me that this particular term has been used just as the Britishers would use it albeit a bit mildly( by using revolutionary terrorism instead of flatly terrorism) and with an apology (that stands exposed). Penguin is a UK company. this statement seems to me a devise to flatter the publishers (present generation who most probably revere their colonial past) --Asim Dagar

A fantastic book which takes you to the journey of the past. The minute detail of the past has been taken into consideration. highly recommended for UPSC exams. you wont feel as though you are reading for exam sake as it makes you so curious to know more and more. this book makes you so knowledgeable of the past you'll realise when You study it thoroughly and look into the previous question papers of IAS and say "I can answer this". A great book and A great experience!!! --kavya adiga Mar 15, 2012

India’s struggle for Independence by Bipin Chandra is your go to book for an in-depth and detailed overview on Indian independence movement . Indian freedom struggle is one of the most important parts of its history. A lot has been written and said about it, but there still remains a gap. Rarely do we get to hear accounts of the independence from the entire country and not just one region at one place. This book fits in perfectly in this gap and also provides a narration on the impact this movement had on the people. Bipin Chandra’s book is a well-documented history of India's freedom struggle against the British rule. It is one of the most accurate books which have been painstakingly written after thorough research based on legal and valid verbal and written sources. It maps the first war of independence that started with Mangal Pandey’s mutiny and witnessed the gallant effort of Sri Rani Laxmi Bai. Many of the pages of this book are dedicated to Mahatma Gandhi’s non-cooperation and the civil disobedience movements. It contains detailed description of Subash Chandra Bose’s weapon heavy tactics and his charisma. This book includes all the independence movements and fights, irrespective of their size and impact, covering India in its entirety. Although these movements varied in means and ideas, but they shared a common goal of independence. This book contains oral and written narratives from different parts of the country, making this book historically rich and diverse. The book captures the evolution of Indian independence struggle in full detail and leaves no chapter of this story untouched. This book is a good read for the students of Indian modern history and especially for students who are preparing for UPSC examination and have taken History as their subject.
See all Product description

B.N.Gururaj
4.0 out of 5 stars Good work, but...
20 November 2018
Format: PaperbackVerified Purchase
This book has been writen by five scholars of JNU, bulk of it being written by Prof.Bipan Chandra. But, the editing has been done so well that one does not feel much difference in the language or style. Terminology used is uniform across different writers. In typical marxist historiograph style, the writers provide good analysis, instead of merely narrating history. The writers keenly examine the politics, society, economy, religion, communalism, ills of colonial rule. But, I felt that the writers have glossed over the communal problem that plagued the country during the struggle for freedom. For instance, they think the Mobla Communal riots of 1922 as rebillion of muslim farmers against Hindu land lords. They do not examine communal riots which took place in Punjab around the same time, which definitely would have shown the communal tint of these so called rebillion. Similarly, they have also gloss over the blunders of Mahatma Gandhi, his despotism over Congress, the conflicting stands he took vis a vis the British from time to time. Nehru's role gets greater prominance in the narrative than other nationalistic leaders. In fact, Pt.Madan Mohan Malaviya is identified as a communal leader! Whereas, the collusion by Communists with the British government is merely shown as conflicting stand of communists at different times of history. For getting factual details correct, one should read Dr.R.C.Majumdar's series of History and Culture of Indian People. Nevertheless, I would recommend this book to anyone who wants to understand India's struggle for freedom with a critical view. The present book gives more wholistic analysis of attendant facts and circumstances.
Read more
89 people found this helpful
Helpful
Comment Report abuse

Sourav
4.0 out of 5 stars Specially for mains....
11 August 2018
Format: PaperbackVerified Purchase
The book is good , the book is presenting our History through a novel type writing, that's why the main key points are not well arranged. after reading it you can able to understand the incidents with analysed manner. i suggest first go with spectrum (new addition) then u can read this . it will makes u to write ur ans very wonderfully.
Read more
32 people found this helpful
Helpful
Comment Report abuse

Sagar Baidyanatham
5.0 out of 5 stars Goes Briefly through our Hero's Struggle
25 August 2017
Format: PaperbackVerified Purchase
Must have book for competative aspirant. This book goes briefly through the Struggle of a Heroes.
Read more

freak_Redefined
5.0 out of 5 stars NICE BOOK BUT.....
1 March 2019
Format: PaperbackVerified Purchase
The overall book is nice to read. But I have a question.
Throughout the book Mr. Chandra seemed to have praised the Congress. Is it true that the independence of India is the fruit of only of Congress and M.K.Gandhi? Doesn't the others like INA, the Martyrs or so called overenthusiastic young lads had no role in the freedom movement?
Mr. Chandra seemed to have intentionally ignored the role of them. What struck me more that the struggle of INA was covered in just one page only, whereas so many irrelevant issues were given more priority.
As on me, I'm an Indian and I have right to know the truth. It's not only Congress, but there were so many persons contributed the freedom movement of India, no matter how little it was. if you can't praise them at least do not insult them by calling overenthusiastic, aimless. it takes a more courage to be aimless or give your life for the motherland.
Read more
18 people found this helpful
Helpful
Comment Report abuse

Note: Paper quality is not good though.
Read more

Anil K Meena
4.0 out of 5 stars Great book from a legendary nationalist writer
1 November 2018
Format: PaperbackVerified Purchase
Though many suggest it for UPSC aspirants, which is actually very nice suggestion, I think it is an imperative book for anyone who studies Modern Indian history. The book is full of interpretations and views on colonial policies of British and would require reader to have a basic background of the modern history period. It is quite lengthy and interesting. Go for it if you are interested in Indian colonial history.
Read more
6 people found this helpful
Helpful
Comment Report abuse

Jenny
5.0 out of 5 stars Best book on history! Includes every single contribution to the movement! Highly recommended!
24 July 2019
Format: PaperbackVerified Purchase
Indian struggle for Independence, by Bipin Chandra, Aditya Mukherjee, Sucheta Mahajan is a quit intense book. It has 39 chapters and almost all cater to distinct events. The book starts with Tribal uprisings and Revolt of 1857 and ends with partition of India covering almost a century though not uniformly on time scale.

This book sheds light on all of the important leaders who were a part of the struggle of independence and introduces us to many aspects of India's freedom struggle that we wouldn't come across otherwise. It is a very handy compilation of quotes, anecdotes and many, many cross references from different works on this subject. It is as detailed as it can be in 650 pages.

It is not just facts but also a justified analysis of the same. It touches upon almost every single contribution to the movement, right from the Northwest frontier to the Southern tip of India. But despite being such a big work, it is not at all tedious.

The amount of background stories that has been included for each of the leaders, made the book much more personal than the dreary historical books on Indian history that we read in school.

It is because it makes reading the same things that we have read in school more interesting, more like a recreation of that period of Indian history, only without the audio-visual element.

It is one of the best history books I have read so far. I would highly recommended it to everyone interested in History and a must-read for those preparing for Civil Services' examination.
Read more

Go to Amazon.com to see all 11 reviews 3.4 out of 5 stars
click to open popover
Unlimited FREE fast delivery, video streaming & more
Prime members enjoy unlimited free, fast delivery on eligible items, video streaming, ad-free music, exclusive access to deals & more.
> Get started
Back to top
Get to Know Us
Connect with Us
Make Money with Us
Let Us Help You
EnglishChoose a language for shopping.
© 1996-2020, Amazon.com, Inc. or its affiliates