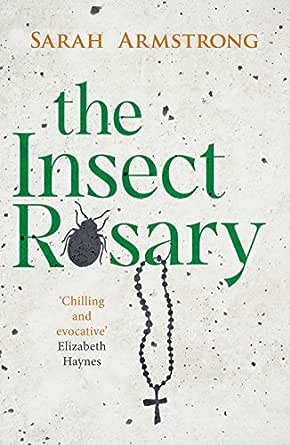 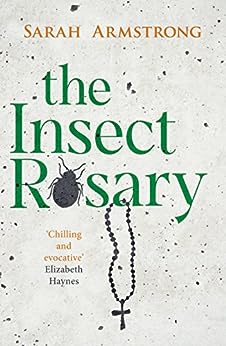 'An atmospheric exploration of the intensity of sibling relationships, The Insect Rosary is chilling and evocative: a story full of dark humour, unexpected tensions and unanswered questions, leading to an unbearably tense conclusion.' Elizabeth Haynes, author Into the Darkest Corner --This text refers to the paperback edition.

Sarah Armstrong's more recent short stories, 'Realignment' and 'Year of the Dragon', have been published in Mslexia and Litro. Her poem, 'The Polesworth Pact', was selected to be displayed on a sculpture as part of the Polesworth Poets Trail. Sarah has been an Associate Lecturer in Creative Writing with the Open University since 2006. The Insect Rosary is Sarah's first novel and is inspired by having spent seventeen years of summer holidays in Northern Ireland. She lives in Colchester with her husband and four children. --This text refers to the paperback edition.

4.3 out of 5 stars
4.3 out of 5
11 global ratings
How are ratings calculated?
To calculate the overall star rating and percentage breakdown by star, we don’t use a simple average. Instead, our system considers things like how recent a review is and if the reviewer bought the item on Amazon. It also analyses reviews to verify trustworthiness.

Kate Hopkins
4.0 out of 5 stars An Author With Potential
Reviewed in the United Kingdom on 10 May 2016
Verified Purchase
Sisters Nancy and Bernadette grew up in England, but spent most of each summer of their childhood at their uncle Donn's farm in rural Northern Ireland. Despite the quiet surroundings (this really was the middle of nowhere), they were very happy there - until the summer when something happened that put 12-year-old Nancy into a permanent state of rebellion, and drove 10-year-old-Bernadette to a series of breakdowns - and stopped the sisters really communicating. Now, some twenty-five years later, Nancy is an unhappy mother, married to American Elian, living miserably in America and trying to bring up a son who's suffering from behavioural problems (Aspergers?) and Bernadette, despite qualifying as a child psychologist, is still mentally fragile, hanging on desperately to her marriage to Adrian and her responsibilities as mother to their two difficult daughters. When the sisters hear that Donn is selling the farm, they meet there to attempt a reconciliation on a final family holiday. But will it work? And when the girls meet up again with sinister Tommy, the man who had something very much to do with their childhood rift, what will the result be?

This is a book I found Amazon's star rating didn't quite work for. On the one hand, I think Armstrong has enormous potential. Her story is gripping, the shifts between 'now' and 'then' worked well, there's some interesting information about the IRA, and her depiction of the rural landscape of Northern Ireland is excellent. She's also very good on 'oddball' characters such as Donn and Nancy's son Hurley, and at expressing the adult Nancy and Bernadette's frustrations. So the book was very readable all the way through, with convincing dialogue, and a page-turning hint of suspense and menace.

On the other hand, I also found it a somewhat frustrating novel. Armstrong grew up partly in 1980s Northern Ireland herself, which I think leads her to assume that her readers know more about IRA activities than most of us will (I was a child in the UK in the 1980s, but found some of Armstrong's references, particularly to what the family were up to, a bit confusing). Were a lot of ordinary families heavily involved in IRA activities? What exactly had the IRA victim done? It never felt entirely clear to me, even at the end. I also found the portrayal of Catholics pretty one-sided. We are all aware of the horrors that have gone on in the Catholic Church - BUT there are also a large number of good and kind Catholics (including priests and nuns), so portraying every single Catholic character as an unpleasant, backward fanatic quickly got irritating. Agatha and Beth were little more than caricatures - the religious fanatic and the crazy anti-feminist Catholic mother respectively. I also felt that Armstrong hadn't quite worked out in her mind what Nancy's feelings as a 12-year-old were about Tommy - would most 12-year-olds really go off alone with a neighbour on the basis of having illegal driving lessons? Nancy seemed to be very calculatingly flirting with Tommy, which meant her later actions were somewhat baffling.

But for me, the greatest problems were that the children Nancy and Bernadette were not that interesting (children who spend all their time bating each other, moaning about being left out or declaring 'I'm bored!' quickly become very boring), and that there were too many loose ends left at the end of the story. Apart from the decision about the farm sale, I felt nothing had really been resolved. Nancy and Bernadette didn't ever really seem to find a solution to their problems, and the final revelation of their 'big secret' felt a tiny bit weak and unconvincing - particularly, I wasn't sure whether adults would have brought in a 12-year-old into their secret plotting; it was too risky. We never found out exactly what happened to Bernadette and her father on that ill-fated car journey. Nor did Armstrong tell the reader how, if Bernadette was so mentally fragile, she managed to qualify as a child psychologist, marry, hold down a job and have children. Nancy's relationship with Elian also never really evolved or changed throughout the book, Adrian and Bernie's daughters were hardly developed, and the girls' reaction to their mother's secret seemed oddly muted. I'd expected some sort of big climax at the end of the book, or at least a clear explanation of what happened - plus a bit more backstory about the girls' lives from their teens to their thirties - but got neither, and felt the book's final stages were somewhat of an anti-climax as a result.

Not my favourite book on the Northern Ireland troubles, then - I much preferred Deirdre Madden's 'One By One in the Darkness' - but I still think some of the vivid writing, Armstrong's love of the Irish landscape and some of the ideas contained in the book made it an interesting read. I'll definitely look out for this author's next novel.

Aileen
5.0 out of 5 stars Fabulous first novel
Reviewed in the United Kingdom on 12 February 2016
Verified Purchase
This is an enthralling read; beautifully and cleverly written to grasp your attention.

I am from Northern Ireland. I grew up in a place not so far from where this was set. My father is English and we are a catholic family. I am only 4 years older than the eldest sister in the book. It's all very poignant to me and, apart from the lack of many characters who were crazy fun (which my childhood was filled with), I can see and feel my youth and the troubles bubbling away around me.
Read more
2 people found this helpful
Report abuse

Mrs a
5.0 out of 5 stars Summer holiday must!
Reviewed in the United Kingdom on 1 July 2015
Verified Purchase
Perfect summer holiday reading. An extremely well crafted novel, flipping between viewpoints and times, it demonstrates why memory is not a factual record but a subjective one. Everyone's individual view being just one part of a puzzle. A must for anyone who has ever belonged to a family!
Read more
3 people found this helpful
Report abuse

Porphyria's Lover
5.0 out of 5 stars Definitely gripped!
Reviewed in the United Kingdom on 20 August 2015
Verified Purchase
A great book which will keep you turning the pages even when you're supposed to be getting on with something else, I was definitely gripped. The author cleverly drips differing perceptions of the past through the 'Then' and 'Now' structure and through the perspectives of sisters whose relationship is expertly drawn both when they were children and in their strained adult relationship.
Read more
One person found this helpful
Report abuse
See all reviews
click to open popover
Unlimited FREE fast delivery, video streaming & more
Prime members enjoy unlimited free, fast delivery on eligible items, video streaming, ad-free music, exclusive access to deals & more.
> Get started
Back to top
Get to Know Us
Connect with Us
Make Money with Us
Let Us Help You
EnglishChoose a language for shopping.
© 1996-2020, Amazon.com, Inc. or its affiliates