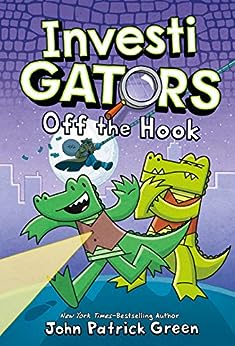 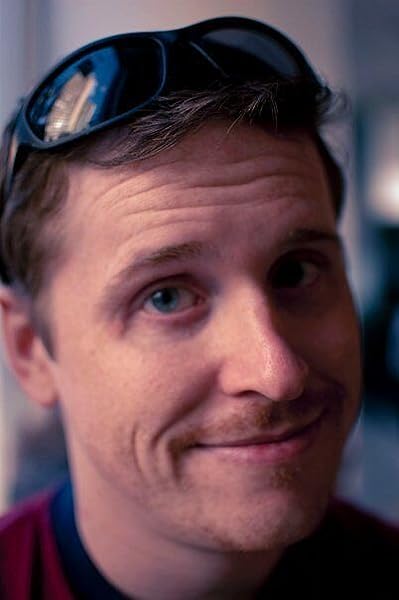 InvestiGators: Off the Hook Kindle Edition

by John Patrick Green (Author) Format: Kindle Edition
See all formats and editions
Sorry, there was a problem loading this page. Try again.

InvestiGators Mango and Brash don their fanciest vests for InvestiGators: Off the Hook, the next mystery in the hilarious adventure series from John Patrick Green

Sewer-loving secret agents Mango and Brash fight for the GATOR good in this zany adventure that will have readers HOOKED!

The InvestiGators are the best crime-fighting duo in the world. But not even their hi-tech training programs can prepare them for the return of their greatest nemesis, Crackerdile, in a shocking new form! Even worse, he’s creating a team of super villains! Faced with the choice between saving themselves or catching the crooks, can Mango and Brash make sure the gator good prevails?

John Green grew up on Long Island and has worked in New York City ever since graduating from School of Visual Arts for Graphic Design in 1997. He was the comics consultant for Disney Adventures magazine, and in addition to Disney has written, illustrated, or otherwise worked on comics for Nickelodeon, Dreamworks, Scholastic, DC Comics, and First Second Books. He is the artist and co-creator of the graphic novels Jax Epoch and the Quicken Forbidden, and Teen Boat!, both with writer Dave Roman. He is also the author of the InvestiGators! series. When not drawing comics John creates artwork for video games, such as Emerald City Confidential, Puzzle Bots, and Nearly Departed. --This text refers to an alternate kindle_edition edition.

John Patrick Green grew up on Long Island and has worked in New York City ever since graduating from School of Visual Arts for Graphic Design in 1997. He was the comics consultant for Disney Adventures magazine, and in addition to Disney has written, illustrated, or otherwise worked on comics for Nickelodeon, Dreamworks, Scholastic, DC Comics, and First Second Books. John is the writer and artist of the graphic novels Hippopotamister, the Eisner-nominated Kitten Construction Company series, and the New York Times-bestselling InvestiGators series. He is also the artist and co-creator of the graphic novels Jax Epoch and the Quicken Forbidden, and Teen Boat!, both with writer Dave Roman. See more of John's work at www.johngreenart.com.

4.9 out of 5 stars
4.9 out of 5
1,562 global ratings
How are ratings calculated?
To calculate the overall star rating and percentage breakdown by star, we don’t use a simple average. Instead, our system considers things like how recent a review is and if the reviewer bought the item on Amazon. It also analyses reviews to verify trustworthiness.
Top reviews

Steph
4.0 out of 5 stars Hilarious!!
Reviewed in the United Kingdom 🇬🇧 on 21 November 2021
Verified Purchase
I love the Investigators graphic novels and this third one is no different. Made me audibly lol at a few points. Fending off baddies, hilarious puns and a whole load of fun, John Patrick Green has written yet another winner! I know a few kids who will be over the moon to see this! And I eagerly await the next book in this series!
Read more
Report abuse

karina
5.0 out of 5 stars Great book
Reviewed in the United Kingdom 🇬🇧 on 10 April 2022
Verified Purchase
Great book to read for kids. Lots of pictures and enough of reading. A kid was giggling on the while read the book. Suitable for boys and girls. After reading the first book my child requested all other parts.
Read more
Report abuse

R. J. Croucher
4.0 out of 5 stars They like and good price
Reviewed in the United Kingdom 🇬🇧 on 8 April 2022
Verified Purchase
Mainly for my second grandson - (3 younger grandchildren) he certainly likes and asked for these. So good value if he reads better etc.
Read more
Report abuse

Zoe author of Everywhere and other books
5.0 out of 5 stars Laugh out loud fun
Reviewed in the United Kingdom 🇬🇧 on 20 March 2021
Verified Purchase
Love the easy style and funny play on words. Both my sons 7 and 9 enjoy reading this series. Cannot wait to get the next ones.
Read more
Report abuse