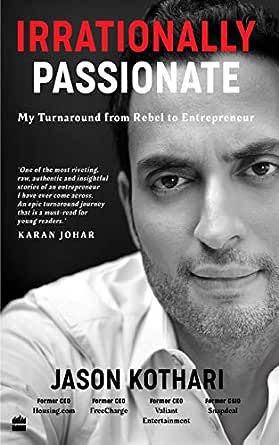 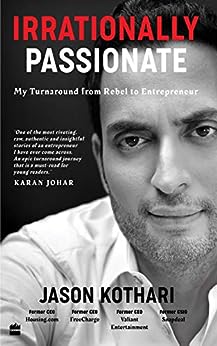 Irrationally Passionate: My Turnaround from Rebel to Entrepreneur Kindle Edition

Jason Kothari is a passionate entrepreneur and business turnaround leader. While still in college, he acquired the bankrupt US-based Valiant Entertainment and led its transformation as the CEO to the third-largest superhero entertainment company after Marvel and DC and a sale for $100 million, a record industry return. Subsequently, Jason was the CEO of Housing.com, where he led the transformation of the distressed company and a merger with News Corp's PropTiger to create the $350 million industry leader. Following this, he was the Chief Strategy & Investment Officer of Snapdeal, where he played a lead role in transforming the distressed company from a monthly loss of over $20 million to a profit, the first for an Indian e-commerce company. Jason was also the CEO of FreeCharge, where he led the sale of the company to Axis Bank for $60 million. In addition, he has been a senior advisor to Softbank; Noon.com, a Middle Eastern e-commerce company that has raised $1 billion; and is a Board Director of Emaar India, which has over $2 billion in real estate assets. He is also an Executive Producer of Bloodshot (Sony Pictures) starring Vin Diesel. Jason holds a B.S. from The Wharton School and lives in Mumbai. --This text refers to the hardcover edition.

‘One of the most riveting, raw, authentic and insightful stories of an entrepreneur I have ever come across. An epic turnaround journey that is a must-read for young readers.’– Karan Johar

‘I have known Jason for some time and have always been impressed with his drive, clarity and vision. This biography has helped me appreciate him even more. From the time he handles a tough negotiation for a chess set as a child, to his turnaround brilliance in the corporate world, there is a lot that entrepreneurs can learn from him; not just bookish, theoretical knowledge, but actual real-life lessons learnt from the School of Hard Knocks. This book is a must-read if you are an entrepreneur!’ – Amish Tripathi, best-selling author of The Shiva Trilogy

‘Living and surviving across continents, embracing and seeking challenges, and finding enormous courage in difficult situations, Jason has an inspiring story which needs to be told. A self-made entrepreneur, he recounts the many risks and learnings that will strike a note with seasoned founders and promoters as well as the new-age tech whiz kids. Thoroughly engaging, anecdotal and without a moment of ennui … this one comes straight from the heart and says it as it is!’ – Priti Rathi Gupta, MD, Anand Rathi

‘A very engaging, hard-hitting yet emotionally bound narrative of a rebel turned enviable entrepreneur. Thought-provoking depiction of what one makes of the advantages and challenges life throws at you whilst relishing the highs, surviving the lows, fighting the anguish and through it all superbly carving a niche for oneself. A delightfully interesting and fascinating read, which has made me respect Jason even more for his fighting spirit, grit, confidence and determination.’ – Anuj Puri, Chairman, Anarock Property Consultants

‘I have had the privilege to work closely with Jason in multiple turnaround situations. Jason’s calmness, clarity, candour and co-ordination helps him effectively navigate through the stormiest of situations. Any company in crisis should have Jason on speed dial.’ – Suvir Sujan, Co-founder, Nexus Venture Partners; Board Director, Housing.com and Snapdeal

‘The way to make a small fortune in entertainment is to start with a large one. The business of making comics and turning them into TV shows, motion pictures and merchandise is challenging and complex. Jason, at Valiant Entertainment, was exceptional. His success in reviving Valiant from the ashes is a rare and admirable feat. Jason is a very sharp, dynamic, relentless yet balanced entrepreneurial leader with a wonderful sense of humour and humility who maintains good cheer even through the most trying of times.’ – Bill Jemas, former COO, Marvel Entertainment

‘To believe you can, to educate yourself to be able and to find the doors and, if necessary, the windows and make it happen. Jason walks the walk and learnt a long time ago, there is no box to think out of. To create and invent is divine, but to implement is what it really is about. Jason knows.’ – Peter Dekom, former Partner, Bloom, Dekom & Hergott, named by Premiere magazine as one of the 50 Most Powerful People in Hollywood --This text refers to the hardcover edition.

4.4 out of 5 stars
4.4 out of 5
104 customer ratings
How does Amazon calculate star ratings?
Amazon calculates a product's star ratings based on a machine learned model instead of a raw data average. The model takes into account factors including the age of a rating, whether the ratings are from verified purchasers and factors that establish reviewer trustworthiness.

Neha Tambe
4.0 out of 5 stars An thrilling biographical book about an astute businessman
Reviewed in India on 17 March 2020
Verified Purchase
If you are someone who love reading about successful people, their lives and how they kept going even when things weren’t in their favor then this book is for you. It is fascinating to read and realize that business is not just about starting something, but sustaining it and making it profitable for a long time is equally thrilling. If you are thinking about looking for some business gyan or theories like the Lean Start-up then this book is not for you.

Writing Style
The writing style is personal and rightly so as it is based on the personal journey of the author. The first few chapters are almost cinematographical. Things are larger than life as a Bollywood movie! Hence you can expect a diversion from the typical business book narration style and find this a bit more personal and exciting even!

My Opinion
I usually don’t prefer reading non-fiction as I find the narration style rather bland, but this was definitely unique in those terms. It certainly draws us into the journey. However as it tries to balance between being a business book and an autobiography, it does not do justice to both the styles. Like though it is personal and has a lot of styles that go well with fiction, it sticks to the chronological narration of incidents.

Similarly, while it talks about the author’s growing up years which are pretty rebellious with a unique perspective, it could also be attributed to the fact that he was a global citizen. The author grew up in different parts of the world and that did give him a different outlook and experience of life. However, his learnings in this period cannot be replicated or taught as theory as they are unique to him.

What we can really translate are the important factors that contributed to him learning from his life. These factors can broadly be described as his readiness to see things objectively, his passion, grit, and determination.

While it talks about his journey from being a rebel to an entrepreneur. I would rather call it his journey to being a fine businessman. The traditional meaning of entrepreneurs is usually being someone who is starting with an idea and making a business out of it. What Jason Kothari brings to fore is the fact that not all entrepreneurs can be great businessmen. And it is in these situations that someone like Jason is required by the business; someone who is passionate about turning around the business and has great negotiating skills. The key here for me is negotiation skills that Jason seems to have mastered.
Read more
3 people found this helpful
Helpful
Comment Report abuse

Surbhi Mishra
4.0 out of 5 stars An outstanding first-hand account of Jason Kothari's success!
Reviewed in India on 16 June 2020
Verified Purchase
The Bhagavad Gita for budding entrepreneurs and business aspirants! Mr Kothari presents a refreshing yet motivating first-hand account about his life.

This book is a highly unique, authentic and upright account of a young entrepreneur, Mr Kothari's life. Filled with practical advice and philosophical inspirations. The book, Irrationally passionate, will force readers to reflect on how they perceive life, work, family and spirituality by giving them a fresh and different perspective.

His journey from amassing money from family and friends to save his childhood favourite comic book company, Valiant Entertainment, from bankruptcy as a mere college student to helping many other companies like Housing.com, FreeCharge and Snapdeal he became one the top ten highest-paid executives of India in his 30s (shocking? Well, you better be geared up before reading the book!).

Composed in the first person, the writing is modest and understandable with the simple use of language. The narrative is cohesive and sharp leaving the reader to learn from the insights of the author reflecting from his experiences in his life. Through the book, the author drove back all the important points home in a very efficient and fruitful manner. However, there are some places where I was lost with the business jargon and was drawn away, yet the key points made me stick to the book and made the overall experience with the book a valuable one.

I personally loved reading this book. I tried to devour every point that I've learnt while reading. I knew that this is a great book when I came across this line, "you cannot compartmentalize your personal and professional lives. They are one and the same." I'm a strong prioritizer, I try to prioritise everything but this line changed my notion a tad bit that we have to flow between work and personal lives instead of shutting down one from another.

To not categorize personal and professional lives.
Not to give up easily. Give it whatever it takes.
Providing value and efficacy should be the goal. Earning wealth shouldn't.
Every person contains vast reservoirs of untapped potential.
The subconscious is extremely powerful. What you put in, you get out.
and many more.

I'd recommend this to you if you are a budding entrepreneur or a business administration enthusiast or if you want to learn something valuable but be prepared for a little business jargon.

Read this wonderful book and gear up for the crazy roller coaster ride Mr Kothari was up to and learn from his mistakes first hand.
Read more
2 people found this helpful
Helpful
Comment Report abuse
See all reviews from India
click to open popover
Unlimited FREE fast delivery, video streaming & more
Prime members enjoy unlimited free, fast delivery on eligible items, video streaming, ad-free music, exclusive access to deals & more.
> Get started
Back to top
Get to Know Us
Connect with Us
Make Money with Us
Let Us Help You
EnglishChoose a language for shopping.
© 1996-2020, Amazon.com, Inc. or its affiliates