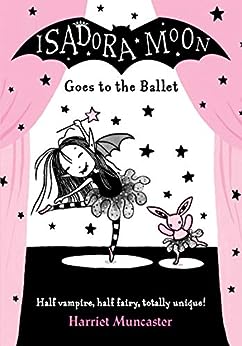 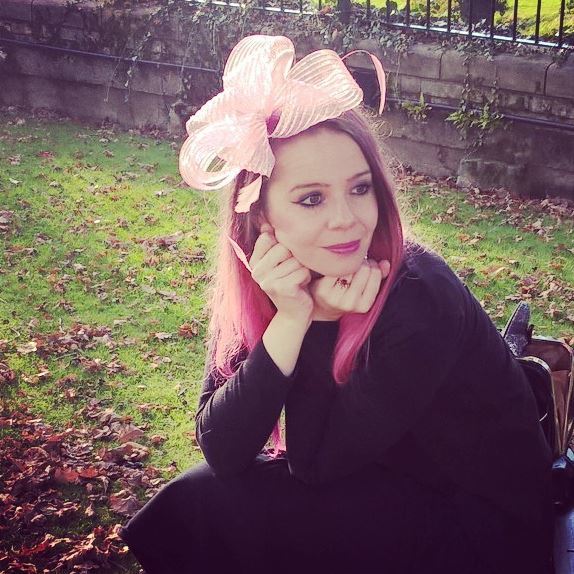 Isadora Moon, that’s me! And this is Pink Rabbit. He is my best friend. We do everything together. Some of our favorite things include flying near the stars in the night sky, having glitter tea parties with my bat-patterned tea set, and practicing our ballet.
We have been practicing our ballet a lot recently and putting on shows for Mom and Dad. I have discovered that Dad’s vampire cape makes a great stage curtain! It looks especially nice with silver-star sequins glued onto it . . . though I am not sure Dad agrees. He seemed a little . . . annoyed last time he saw his best cape being used as a stage curtain.
“It’s covered in stars!” he complained. “I’m not a wizard—I’m a vampire! Vampires don’t have starry capes.”
I felt bad then, but it was okay because Mom waved her wand, and the stars all disappeared. She can do things like that because she’s a fairy. She was the one who brought Pink Rabbit to life for me.
“Good as new!” she said, sitting down on one of the chairs Pink Rabbit and I had put out for the audience. Dad sat down too, with my baby sister, Honeyblossom, on his lap, and they all waited for our show to begin.
“Right,” I whispered to Pink Rabbit once we were behind the non-starry curtain. “Can you remember your moves?”
Pink Rabbit nodded and did a perfect leap. He’s been getting very good at ballet lately. I gave him a thumbs-up.
“Let’s go!” I whispered.
Together we leapt out from behind the curtain in a magnificent jump. Mom and Dad clapped and cheered. Pink Rabbit began to twirl on his tippy-toes. I swirled and twirled in my glittering black tutu.
“Excellent!” called Dad.
“Enchanting!” said Mom, waving her wand so that we were showered with pink flower petals.
At the end of the show, I gave a deep curtsy and Pink Rabbit bowed, and Mom and Dad cheered some more. Even Honeyblossom clapped her chubby little hands.
“That was really wonderful!” said Mom. “And so professional!”
Pink Rabbit looked proud and puffed out his chest in his striped waistcoat.
“One day you’ll both be prima ballerinas!” said Dad.
“I hope so!” I said as we both tiptoed gracefully across the floor. We followed Mom and Dad down the stairs and into the kitchen for breakfast. It was seven o’clock at night, but we always have two breakfasts in our house. One in the morning and one in the evening. That is because Dad sleeps during the day. He has his breakfast in the evening, before going out for his nightly fly.
“I want to be just like Tatiana Tutu!” I said as I began to spread peanut butter on a piece of toast. Tatiana Tutu is my favorite ballerina of all time.
I have never seen her in real life, but I always watch when she’s on TV, and I have a special scrapbook filled with pictures of her. I cut the pictures out of magazines and decorate them with starry sequins and silver glitter.
I also have a big poster of Tatiana Tutu on my bedroom wall. She is wearing a sparkling black tutu and her famous star diamond tiara. Her black tutu looks exactly like the kind a vampire-fairy might wear. . . . It looks just like mine!
“If you keep practicing and work hard at your ballet, I’m sure you’ll be as good as Tatiana Tutu one day,” said Dad as he poured himself a glass of his red juice. Dad only ever drinks red juice. It’s a vampire thing.
“Yes,” said Mom. “Keep practicing and one day maybe we’ll come to watch you and Pink Rabbit perform in a real theater!” Pink Rabbit bounced up and down.

HARRIET MUNCASTER is the author/illustrator of the picture books I Am a Witch's Cat, and Happy Halloween Witch's Cat! She holds two degrees in illustration and has lived on the same hill in Hertfordshire, England, for as long as she can remember. Isadora Moon is her first chapter book series. --This text refers to an out of print or unavailable edition of this title.

Praise for Isadora Moon Beautifully presented throughout with pink and black illustrations . . . a lovely step up book for newly independent readers. (lovereading4kids.co.uk)

The first-person voice helps the reader to connect with Isadora, who may just be the most lovable vampire ever created. (Guardian) --This text refers to an alternate kindle_edition edition.

Half vampire, half fairy, totally unique! --This text refers to an alternate kindle_edition edition.
Read more

4.9 out of 5 stars
4.9 out of 5
419 global ratings
How are ratings calculated?
To calculate the overall star rating and percentage breakdown by star, we don’t use a simple average. Instead, our system considers things like how recent a review is and if the reviewer bought the item on Amazon. It also analyses reviews to verify trustworthiness.
Top reviews

Meera
5.0 out of 5 stars Magical
Reviewed in the United Kingdom on 3 December 2017
Verified Purchase
Isadora Moon loves the ballet so when her class are going on a school trip to the ballet to see her favourite dancer she is ecstatic. A tale of love, embarrassment, with of course a large dosage of fairy and vampire magic just to spice up the story. I really do love pink rabbit for his amazing energy and talent. Another beautifully illustrated tale of growing up.
Read more
Report abuse

BruceyBonus
5.0 out of 5 stars Fairy fantastic
Reviewed in the United Kingdom on 10 February 2018
Verified Purchase
This is our second book from the Isadora series and we love love love them. The books are well written and he illustrations are beautiful.
My 6 year old will read it independently as well as have it read to her.
Highly recommend this series

Dot
5.0 out of 5 stars Five Stars
Reviewed in the United Kingdom on 2 May 2017
Verified Purchase
My 7yr old dayghter has loved all the books in this series!
Read more
One person found this helpful
Report abuse

P. Hopwood
5.0 out of 5 stars Five Stars
Reviewed in the United Kingdom on 8 June 2018
Verified Purchase
Perfect for our 5/6 year old. She loves these.
Read more
One person found this helpful
Report abuse
See all reviews
Back to top
Get to Know Us
Connect with Us
Make Money with Us
Let Us Help You
EnglishChoose a language for shopping.
© 1996-2021, Amazon.com, Inc. or its affiliates