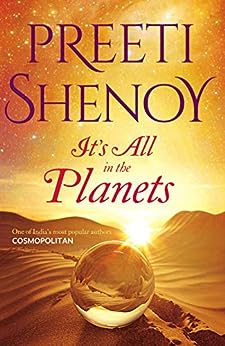 It's All In The Planets Kindle Edition

This Story Actually Tells That No Matter What Happens, True Love Finds Its Destination - It's Written In Our Destiny - No One Can Change It. Perfect Combination Of Love, Life, Friendship, Family, Faith - The Book Reminds You The Bond and Selfless Love B/W Friends. No Matter What Happened, At The End, Your Friends Will Always Take Care & Support You.. --By Abhi on 25 September 2016

I just love Preeti Shenoy's way of writing. She writes in a very simple manner and still you won't lose interest in the novel. 'It's all in the planets' is all about relationships. And I love the way she has described Aniket and Nidhi. I love you n your writings preeti mam !!! Keep writing !! All the very best !!! --By Nandita Chaturvedi on 21 September 2016 --This text refers to the paperback edition.

4.3 out of 5 stars
4.3 out of 5
692 global ratings
How are ratings calculated?
To calculate the overall star rating and percentage breakdown by star, we don’t use a simple average. Instead, our system considers things like how recent a review is and if the reviewer bought the item on Amazon. It also analyses reviews to verify trustworthiness.

Sanhvi
1.0 out of 5 stars Waste of money and time
Reviewed in India on 29 October 2018
Verified Purchase
Why do I even bother to buy her books again and again in hope of reading a good story? It's just the marketing they do but no story they write. It is only the brand name but there is nothing in the book 70% of the book describes what is there in the room background what colour of the wall etc but if we talk about plot it is a simple girl and boy falling in love. Very boring repetitive nothing to read at all. Blogs are better
Read more
15 people found this helpful
Helpful
Report abuse

Nidhi Kiran
5.0 out of 5 stars It's too good
Reviewed in India on 7 June 2019
Verified Purchase
Meet Aniket. Twenty-seven, techie, Mr Average. He cannot believe his luck when he starts dating Trish-a stunning,sexy model, who is totally out of his league. But Trish has a list of things she wants him to work on, beginning with his Potbelly and his geekiness.
🌠
Then there's NIDHI, thirty-four, who has quit her corporate job to follow her passion. She is engaging to Manoj, Mr Perfect- expect for one aspect.

Aniket and Nidhi meet on a train, a chance encounter, and she agrees to become his 'relationship coach'. It's a decision that sets into motion a chance of events that will have a profound impact on the lives of all involved.
Three men, two women and a trap called Destiny.

Well, we all know Preeti Shenoy is one of the best-selling authors in India. This is my first book of hers and I am happy to say that I am not disappointed.

My review...
☑️☑️☑️☑️/5
▶️The cover is eye-catching.
▶️The title is appropriate.
▶️The story is sweet and simple.. and it's interesting too.
▶️It will make you believe in luck, destiny and astrological things.
▶️ Language is also simple that makes it easy to grasp.
▶️I adored Ani.. he is so sweet and cute.. 😍
You will glide easily through the story.. do give it a chance..
Read more
One person found this helpful
Helpful
Report abuse

Tejaswi Vajinepalli
5.0 out of 5 stars Beauty of Love
Reviewed in India on 9 January 2018
Verified Purchase
Guru ji Preeti Shenoy, u are great, how can u write so lively and lovely at the same time ?
both are two sides of a coin, yet you strike a chord with present gen relationships with how they are now and how good they can be by showing two completely contrasting case studies, lovely narration from 2 different perspectives, it creates a wholesomeness to the reader, giving a complete and clear picture of understanding from both ends..!
And one more small request madam, it's really hard to believe that true love is still in existence, yet u portray it so beautifully, being single, I feel sick to read it, some numbness creeps over me, and I strongly believe that true love isn't just hard to feel, but really hard to find, if at all in existence still today..!
There's no doubt u are a relationship expert, maybe u might be having a good future as a relationship coach too Preeti ji...!

Kindle Customer
4.0 out of 5 stars an easy and enjoyable read
Reviewed in India on 13 February 2019
Verified Purchase
And another beautiful reading experience comes to an end... this was my second book by the author and though i liked "A hundred little flames" more, i enjoyed reading this too... loved the character of Nidhi and Taara... how adorable these characters were... the book is really easy to read and is a light read...
The ending unlike other sad love stories leaves you on a happy note( for a change)..
The story is of Nidhi and Aniket and of their relationship with their partners and of destiny.....
While reading this book you must know that the later parts of the book hold some big twists...
Finally, i will end by saying that if you are looking for an easy but enjoyable read you must pick this book...
Happy reading...
Read more
One person found this helpful
Helpful
Report abuse

Pradeep Neelakandan
5.0 out of 5 stars It is a simple love story which deals about the current relationship issues
Reviewed in India on 25 April 2017
Verified Purchase
Finally I completed reading this novel.It is a simple love story which deals about the current relationship issues.They are articulated very well with much needed nuances.First of all, I got introduced to the author's writing through 'Times of India' Short Story contest.I was completely bowled over by the author's Thoughtful Thursdays conducted on the author's page in facebook,which I'm missing currently.That provoked me to read this novel.This is my first novel of the author.I wish to read all the novels of the writer.Absolutely this novel gives us a lot of insights about how a perfect relationship should be.I'm pretty sure that there were lots of research done , before writing this novel, which is clearly manifestated through the meticulous writing.I loved Tara's character very much than the lead characters ,who is a good friend,philosopher and a catalyst for Nidhi. Aniket,our hero is really a great chap,who perfectly fits into a good boyfriend category.Nidhi's character is well etched as a reltionship guide to a blogger.Her constant relationship advice to fitness advice triggers our interest.On the whole , it is a good novel with a gripping narration.
Read more
7 people found this helpful
Helpful
Report abuse

KindleSomewhere
4.0 out of 5 stars Reasonable
Reviewed in India on 26 February 2019
Verified Purchase
The novel could be a bit shorter but is reasonably well-written. There's quite a lot of discourses about what different ladies want in life, including a spot of "two-timing", importance of "being together", etc., but the author, maybe bbecause she is a lady, never raises a single question about what a man could possibly look for in life. But then, that's the fate of the male - useful only for shorter durations, with minimal importance of preferences, aspirations, accomplishments and maybe slightly higher rating for the fatness of his purse!
Read more
One person found this helpful
Helpful
Report abuse

Amazon Customer
5.0 out of 5 stars Another stunning book my favorite writer Preeti Shenoy
Reviewed in India on 25 July 2017
Verified Purchase
Another stunning book my favorite writer Preeti Shenoy. Loved it to the core. Have read all her books and can find that she gets better and better with every new book. This book is a simple love story which deals about the current relationship issues. we can easily relate to each characters in the book. The way she has narrated the story is so simple that even a first time reader can easily connect to the book. I would suggest all to read this book and her other book "The Secret Wish List" which is my all time favorite, a story which will motivate the reader to chase their dreams.
Love you ma`am,keep writing great stories.......
Read more
One person found this helpful
Helpful
Report abuse
See all reviews

Shriya
4.0 out of 5 stars Worth your time
Reviewed in the United Kingdom on 4 February 2017
Verified Purchase
Preeti Shenoy is Indias biggest bestseller in fiction and has got young India reading more Women's Fiction/Chick Lit. I only found out about her work with a bit of research. As I am branching out to new genres and authors I thought why not?

Astrology and how relationships are crucial is central to this book. The narration is fast paced and I really enjoyed that. An easy read that you could take on your travels or even get you out of a reading slump.

I find that I could relate to every character and I know someone just like them. The cover is beautiful too. I also feel that there is room for a sequel!

I plan on reading more from Preeti and recommended this book if you're wanting to read Romance novels from an Indian author.
Read more
Report abuse

Sushila
5.0 out of 5 stars Romantic, funny and beautiful
Reviewed in the United Kingdom on 8 June 2018
Verified Purchase
I'm a romantic at heart and so this book was the perfect read.
It's funny and light but also fast paced. A lovely ending too!
Read more
Report abuse

Kindle Customer
5.0 out of 5 stars Amazing
Reviewed in the United States on 17 January 2020
Verified Purchase
Although this is a romance, I love that she dealt with issues that affect every couple. I prefer this to the "perfect" romance novels. Many times, we have all known a Trisha or have suffered like Aniket. I also loved the themes of parent/ child relationship and fitness.
Read more
Report abuse

Sudheer
4.0 out of 5 stars Not sure it's in planets but this book has...
Reviewed in the United States on 26 November 2016
Verified Purchase
As I say not sure it's all in planets but Preeti shenoy told a great passionate modern love story or relationship with grace.

One scenes are shown in Ankit n Nidhi perspectively, I felt it really nice. On one situation women n men thinks differently and it's clearly shows in this book. A started thinking about Manoj n Trish angle as well.. Made me to think a lot.

Finally I really enjoyed it. Completely very fast as I targeted tomorrow but ended today only..
Read more
Report abuse

Ren
5.0 out of 5 stars Five Stars
Reviewed in the United States on 23 December 2016
Verified Purchase
good for a quick non complex read...
Read more
Report abuse
See all reviews
Back to top
Get to Know Us
Connect with Us
Make Money with Us
Let Us Help You
EnglishChoose a language for shopping.
© 1996-2021, Amazon.com, Inc. or its affiliates