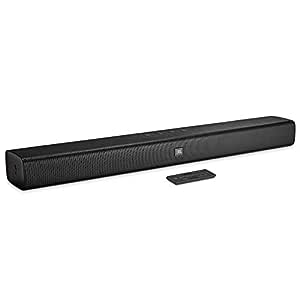 Add to Cart
₹ 10,490.00
& FREE Shipping on eligible orders. Details
Sold by: Cannycom Store
Have one to sell? Sell on Amazon

Fulfillment by Amazon (FBA) is a service we offer sellers that lets them store their products in Amazon's fulfillment centers, and we directly pack, ship, and provide customer service for these products. Something we hope you'll especially enjoy: FBA items qualify for FREE Shipping and Amazon Prime.

If you're a seller, Fulfillment by Amazon can help you grow your business. Learn more about the program.

JBL Bar 2.0 compact sound bar provides stellar sound for your favorite TV series, movies and music. It is slim, incomparably designed and extremely easy to use. JBL surround sound and double bass ports turn your TV sound into real cinema sound. The JBL Bar 2.0 includes Bluetooth connectivity so that you can stream your favorite music to the speaker, wirelessly. It is easy to set up with multiple connectivity options, Bluetooth, HDMI, Aux cable to connect between your TV and the sound bar. You can control the JBL Bar 2.0 with your existing TV remote control.

With options of HDMI(ARC) Port and Optical Port, connecting your BarStudio to your television is a simple one cable setup. Plug your MP3 loaded USB drive to the Soundbar and music would play automatically once the USB drive is detected.

Technical Details
Technical Specification
Additional Information
Warranty & Support
Warranty Details: 1 Year Warranty Provided by the Manufacturer from Date of Purchase
Feedback
Would you like to tell us about a lower price?
If you are a seller for this product, would you like to suggest updates through seller support?

Hari D
4.0 out of 5 stars A little expensive, but a good upgrade with unique features
28 January 2019
Verified Purchase
Update 2: Lately, the below mentioned freeze issue has become more frequent, so I just contacted the JBL support to see if it is something they could fix it.

Update: after using for a while, I can see a consistent issue that repeats every few weeks. Unless I power cycle it, it wouldn't turn on so it seems to go into some sort of a freeze. At the current frequency it is not bothering me too much so I am still leaving 4 stars. I will try to contact their super and see what they have to say.

The built-in speakers and the analog Aux audio output of my 55" TV stopped working, but luckily the optical output is still functional so I have been using the TV with a couple of old desktop speakers connected to it through a toslink to analog RCA converter. This setup worked and the audio quality was good (they were a good quality Yamaha speakers), but they didn't really fit and my wife complained of the clutter and the difficulty to clean. There is also the pain of not being able to control the audio via remote, so I had been researching for a soundbar with the below features and this one is the cheapest with all the features I looked for. Though it was over the budget I had in mind (5k), I got more features than I was looking for so I went for it. Here is what I was looking for:
- Optical input
- Auto on/off
- Remote control

This soundbar not only has the above features, it also comes with couple of additional features that are very useful for me:
- It recognizes my existing TV remote for audio control (volume buttons and mute), so it integrates well into the TV and won't feel like an addon.
- It supports Dolby Digital decoding, so I don't have to switch my TV optical output to PCM mode (unlike for the Optical to analog converter that I was using before).
- Supports bluetooth, so I am able to pair it with Google Home Mini and get a much better sound for playing songs.

I find the sound from this soundbar to be pretty good. Actually, I didn't have high expectations, as I was merely trying to replace the built-in audio from the TV, but these would have been a definite upgrade even otherwise. Audio clarity is good with reasonable bass and it fills my small room well even without having to go to the max.

Here are some gripes for which I reduced one star:
- LED indicator lights don't stay on. I would have liked an option to choose.
- There is no way to tell whether the Surround mode is currently on or off and the manual doesn't say
- When changing modes, the audio pauses for a second which is annoying. However, I plan to leave it in Movie mode with Surround on so this is not a big issue for me.
- I paid 7200 for it, which is a good deal compared to its MRP, but I think it it is still expensive for what it is. The Xiaomi Mi soundbar comes for 5k with a better sounding speakers if one didn't need a remote (and OK with white color).
- Power adapter is a big brick. A smaller adapter would reduce the clutter near the TV and frankly, JBL can afford to provide one at the premium they attached to it. Better yet, they could have built the adapter into the speaker itself.
- Manual clearly says that it should automatically wake up when it senses an audio signal from the last detected connection, but it didn't work for me for Bluetooth (yes, the manual clearly includes BT also). An hour after playing some music from Google Home Mini, I tried to play again and there was no music. Normally, Google Home falls back to built-in speakers, if the BT speaker shuts off, so in this case, the speaker didn't turn off, making Google Home play over BT, but since it is not turning on, the audio was getting lost.

Rohit Srivastava
4.0 out of 5 stars Worth Buying
11 April 2019
Verified Purchase
Specific Points to be noted:
1.Small and impact full
2.Easy to install and use
3.Equalized according to the sound of a TV (SOUND ENHANCEMENT OF A TV ), not to be used as a solely as a sound system
- Made for small rooms
- Has a stereo sound still, front listening is advisable
- Best for general tv viewing, movies, web series, youtube, etc.
4. The material is durable and easy cleaning.
5. Cable management is a plus
6.Comes with a remote that specifies each mode separately.
Read more

Tapan A.
3.0 out of 5 stars Low budget, low expectations.
30 January 2019
Verified Purchase
Good enough for the cost if you want a speaker. Minor upgrade over my mi TVs built in speakers, but in no way a substitute for a home theatre system.
Probably a better idea to save up and go for something better.
Read more
15 people found this helpful
Helpful
Comment Report abuse

Sree Ram
1.0 out of 5 stars Worthless product and fake seller
5 June 2019
Verified Purchase
The sound quality is quite mediocre and constantly faltered on the audio source. The speaker already stopped working and does not turn ON. In just 10 days, the product is not even turning ON. The product started to fail after the time to raise a replacement request is over. I now understand that it is a returned piece on failure that was nicely refurbished, repackaged and sold to me. Magical job of the seller.

The seller is Amazon fulfilled and now I understand what that means; the seller just fulfilled Amazon's officials demands for that certification.

In summary, unworthy product and not at all trustworthy seller.
Read more
9 people found this helpful
Helpful
Comment Report abuse

Rahul
1.0 out of 5 stars Worst after sales service
20 November 2019
Verified Purchase
Sound quality of the soundbar was good, but.. my soundbar stopped working after six months (25 days before writing this review). Till this time have called jbl customer care more than 6 times. Everytime they generate new request no. and ask me to wait. Nobody visited from jbl to resolve issue till date. Totally fedup. Worst after sales service in world. Not going to purchase any jbl product in future and recommend others not to.
Read more
4 people found this helpful
Helpful
Comment Report abuse

Biju Joswin
2.0 out of 5 stars Not up to the mark
20 April 2019
Verified Purchase
This JBL is not up to the mark. Sound is average...Remote is waste. Buy Philips HTL1193B/94 Bluetooth Soundbar Speaker. It is far far better than this JB and lower price too....
https://www.amazon.in/gp/product/B0756CC1BN/ref=ppx_yo_dt_b_asin_title_o02_s00?ie=UTF8&psc=1
Read more
3 people found this helpful
Helpful
Comment Report abuse

Abhimanyu Ghoshal
4.0 out of 5 stars Clear, balanced sound and easy connectivity - just don't expect a lot of bass
8 June 2019
Verified Purchase
This soundbar is a lot more compact than I thought, and it delivers crisp, clear audio that's loud enough to fill a mid-size living room. You should have no trouble hearing dialogue in movies and TV shows. It doesn't struggle at any volume, so you won't hear any distortion even when it's turned up all the way.

However, its bass output is a bit low - that's to be expected, since it doesn't come with a subwoofer. As such, I wouldn't recommend it to music buffs.

I needed something that would connect easily and require minimal troubleshooting, since this was for my parents' place, and this one did the trick.
Read more
One person found this helpful
Helpful
Comment Report abuse

Cons
Fragile remote
Bass is not as per expectation
No port to connect external woofer
Read more
4 people found this helpful
Helpful
Comment Report abuse
There are 124 customer reviews and 155 customer ratings.
See all 124 customer reviews
Write a product review
Unlimited FREE fast delivery, video streaming & more
Prime members enjoy unlimited free, fast delivery on eligible items, video streaming, ad-free music, exclusive access to deals & more.
> Get started
Back to top
Get to Know Us
Connect with Us
Make Money with Us
Let Us Help You
EnglishChoose a language for shopping.
© 1996-2020, Amazon.com, Inc. or its affiliates