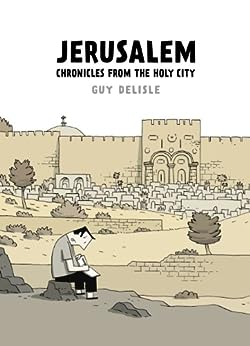 “Delisle, a former animator, has a knack for visual shorthand ... and for drawing environments: religious shrines and settlements, but also grocery stores, playgrounds and checkpoints -- lots of checkpoints. The cultural and physical barriers among the Jewish, Muslim and Christian communities in and around Jerusalem, and the compromises and work-arounds the city's residents have been forced to devise, become the source of dark but gentle comedy: absurdity teetering on the edge of tragedy.” ―Douglas Wolk, The New York Times

“The tone of [Jerusalem] is by turns gently humorous and dumbfounded. His drawing style... suits his brisk, snapshot approach.” ―Financial Times

“Neither Jewish nor Arab, Delisle explores Jerusalem and is able to observe this strange world with candidness and humor...But most of all, those stories convey what life in East Jerusalem is about for an expatriate.” ―Haaretz

Guy Delisle spent a decade working in animation in Europe and Asia. In 2008–2009, he accompanied his wife, an administrator for Doctors Without Borders, on a yearlong posting in Jerusalem. He lives in the south of France with his wife and children.

4.6 out of 5 stars
4.6 out of 5
161 global ratings
How are ratings calculated?
To calculate the overall star rating and percentage breakdown by star, we don’t use a simple average. Instead, our system considers things like how recent a review is and if the reviewer bought the item on Amazon. It also analyses reviews to verify trustworthiness.
Top reviews

Anirudh Gupta
4.0 out of 5 stars As usual insightful
Reviewed in India on 12 April 2020
Verified Purchase
Sublime captivating, changes the perspective one has of the promised land. Funny and somber at the same time. One feels for the people who experience injustice from the ones who have power...seems history repeats and repeats and repeats ...which is deeply described in this book...after all a picture is a thousand words
Read more
One person found this helpful
Helpful
Report abuse

el_gee
5.0 out of 5 stars Simply amazing
Reviewed in India on 10 October 2016
Verified Purchase
I have read a few other books from Guy Delisle and absolutely love his narrative style and art, but Jerusalem is his best work to date.

Amazon Customer
5.0 out of 5 stars Good book on an outsiders experience in Jerusalem
Reviewed in India on 13 July 2018
Verified Purchase
Gives a good idea of the confusion that is Jerusalem. Book itself is of good quality. Hardcover. Good paper
Read more
One person found this helpful
Helpful
Report abuse

P Ghosh
5.0 out of 5 stars 👌
Reviewed in India on 13 January 2020
Verified Purchase
Excellent!!
Feels like someone is actually living in Jerusalem.
Read more
Helpful
Report abuse

Anindo Banerjee
5.0 out of 5 stars " Thanks, god, for making me an atheist "
Reviewed in India on 18 July 2017
Verified Purchase
Brilliant. Engaging. Sea of information. Changes perspective. Should be a part of any literary syllabus.
Read more
One person found this helpful
Helpful
Report abuse

Sam Quixote
4.0 out of 5 stars Can't we all just get along?
Reviewed in the United Kingdom on 13 May 2012
Verified Purchase
Guy Delisle travels to Jerusalem with his partner and their two kids for a year. His partner is an administrator for "Doctors Without Borders" and Delisle spends the year working on his comics, looking after the kids, and exploring/trying to understand the city of Jerusalem and its peoples.

If you've read Delisle's work before you'll know he goes to hard-to-reach places and reports on his time there (North Korea, China, Burma) and that the resulting travelogues are always entertaining and enlightening - just like this latest book.

The book isn't a polemic nor is it meant to explain the region or the history, it's really just a memoir/travelogue of his time there. So there is equal parts of his time describing his everyday duties looking after the kids and going to parties, making friends, as much as there is encountering and observing violence from bombings in Gaza, to the numerous checkpoints and outright chaos of this area.

The reader gets to see how bizarre Jerusalem is. The city is divided into Christian quarters, Jewish quarters, and Muslim quarters, where literally one side of the street a woman can wear what she likes and on the other she must be covered head to foot. The constant military presence and day to day reminders of violence - everyone carries a gun, not just soldiers. The shrillness of the piercing calls to prayer echo throughout the city whether you are religious or not. The ridiculously high number of checkpoints everywhere, the constant traffic jams...

As an atheist myself, it's hard to believe that this troubled region is because of one group believing one thing over another leading to literally millennia of conflict. As such, it's incredibly shocking how people will be so petty over everything. One contested house becomes demolished, another goes up - years pass, the house is demolished/taken over, another goes up. And on and on. And the bizarre behaviour of Orthodox Jews who are just flat out racist and violent toward anybody who isn't an Orthodox Jew themselves, is just terrifying.

Delisle doesn't take sides on whether he believes one side is right over another, he's an atheist himself and does his best to present all sides of the argument. Through his fresh eyes the reader sees the area as if they were visiting it themselves. It's a fascinating look at a troubled region, told memorably and filled with excellent artwork throughout all by Delisle, who has once again written/drawn a wonderful book on a strange part of our world with characteristic good humour and intelligence.
Read more
6 people found this helpful
Report abuse

Gothicfun
5.0 out of 5 stars Totally amazing
Reviewed in the United Kingdom on 6 February 2020
Verified Purchase
This has a feeling of truthfulness, showing both the good and the bad sides of life in certain parts of Jerusalem. Guy Delisle always seems like a bit of a masochist, I thought this ever since reading his book on North Korea, but I'm glad he goes into somewhat difficult situations and reports back in such a readable graphic and above all memorable way.
Read more
Report abuse

P. Rö
3.0 out of 5 stars OK
Reviewed in the United Kingdom on 17 June 2012
Verified Purchase
Delise has made his own genere. He draws out his daylilife in exotic places. This time he's a homewife in Jerusalem. His wife is having an interesting job in Gaza while he's looking for playgrounds, cafés and descent kindergartens in the city. Delise want's to get to Gaza too, but he never gets there. The story is slow, but he manages to give the reader interesting information about the history and the present situaton in Israel.
Read more
One person found this helpful
Report abuse

Ms. Elspeth Rose
5.0 out of 5 stars Pilgrimage of a present
Reviewed in the United Kingdom on 11 December 2012
Verified Purchase
What do you buy the guy who has everything? Apparently this.
Bought for my Dad as a birthday present this went down very well, he had his head stuck in it for hours.
Read more
3 people found this helpful
Report abuse

Inger
5.0 out of 5 stars Jerusalem in every day
Reviewed in the United Kingdom on 17 May 2015
Verified Purchase
So funny - and such a precise picture of life in Jerusalem. Delisle is an awsome cartoonist
Read more
One person found this helpful
Report abuse
See all reviews
Back to top
Get to Know Us
Connect with Us
Make Money with Us
Let Us Help You
EnglishChoose a language for shopping.
© 1996-2021, Amazon.com, Inc. or its affiliates