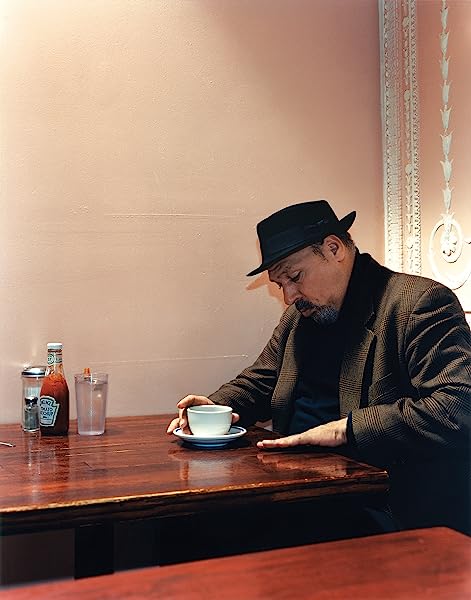 by August Wilson (Author)
4.8 out of 5 stars 148 ratings
See all formats and editions
Sorry, there was a problem loading this page. Try again.
10 Days Replacement Only

Keep the item in its original condition and packaging along with MRP tag and accessories for a successful pickup.
Read full replacement policy
Read full returns policy
Set in the 1970s, this richly textured piece follows a group of men trying to eke out a living by driving unlicensed cabs ('jitneys'). When the city threatens to board up the business and the boss s son returns from prison, tempers flare, potent secrets are revealed and the fragile threads binding these people together may come undone.

Jitney is currently on Broadway; it was first produced in New York in the spring of 2000, with a London run following in 2001, winning rave reviews and the accolade of the as the best play of the year. Jitney is the seventh in Wilson s American Century cycle of plays on the black experience in twentieth-century America. He writes not about historical events or the pathologies of the black community, but the unique particulars of black culture. In addition to the essential and insightful preface by Ruben Santiago-Hudson, this edition includes production stills from the Manhattan Theatre Club's Broadway production, directed by Santiago-Hudson and featuring Harvy Blanks, Anthony Chisholm, Brandon J. Dirden, André Holland (Moonlight), Carra Patterson(Straight Outta Compton), Michael Potts (The Book of Mormon), Keith Randolph Smith, Ray Anthony Thomas and John Douglas Thompson.
Read more
Previous page
Next page

'Playful and poignant... a triumph' Guardian

'Can you think of another dramatist able to bring such passion, humour and imagination to the task of chronicling a century from its first to its last? I can't' Benedict Nightingale, The Times

'Jitney is a transport of delight. So vividly written... it keeps you steadily amused, concerned, and moved' --New York Magazine

'The best play of the new year by a hop, skip, and a mile!' --New York Observer

August Wilson (1945-2005) is a major playwright whose work has been consistently acclaimed as among the finest of the American theatre. His first play, Ma Rainey's Black Bottom, won the New York Drama Critics' Circle Award for best new play. Hissecond play, Fences, was adapted to an Oscar-nominated film starring Denzel Washington, which won the Pulitzer Prize and Tony Award. He was awarded his second Pulitzer Prize for his play The Piano Lesson.

4.8 out of 5 stars
4.8 out of 5
148 global ratings
How are ratings calculated?
To calculate the overall star rating and percentage breakdown by star, we don’t use a simple average. Instead, our system considers things like how recent a review is and if the reviewer bought the item on Amazon. It also analyses reviews to verify trustworthiness.
Top reviews

doc peterson
4.0 out of 5 stars "You want to make something of your life, then the opportunity is there."
Reviewed in the United States 🇺🇸 on 22 August 2011
Verified Purchase
_Jitney_ is set in 1977: the energy crisis is in full swing, and the nation is heading towards a recession. In Pittsburgh, Becker runs the jitney station - an underground, unofficial taxi serving the African-American community. The pace of the play is slow and meditative as the jitney drivers banter and run the dozens on each other; the plot is subtle - the drivers are working-class men simply trying to make ends meet, each with very different perspectives on where life is taking them. Youngblood is a Vietnam veteran who is struggling to realize the "American dream," hoping to buy a house for the mother of his child. Becker, the owner of the jitney station is facing its closure by the city and the recent release of his son, Booster, from prison. Booster is starting his life anew after serving 20 years for murder.

As these characters tease and verbally spar with each other, Wilson shows a variety of perspectives on the African-American experience in the late 20th century. As Youngblood put it, "If you can't change the way you look at me ... then I might as well surrender now. I can't beat your memory of who I was if you can't see I've changed. ... no matter what I do, I can't never do it right, 'cause all you see is the way I used to be. ... You don't see I've changed." This is echoed by Booster, who later in the play says, "... I decided right then that dreams didn't mean anything in this world. You could be the president or a bishop or something like that. You can dream you got more money than Rockerfeller. See what happens when you wake up." In spite of these broken dreams and the sense of inevitable failure, Wilson continues to offer hope to his characters, much as America continues to offer hope to its downtrodden.

The barbershop banter and lack of action makes for a pensive piece, much more so than many of Wilson's other plays. It is a powerful play nonetheless.
Read more
3 people found this helpful
Report abuse

Benjamin Diana
3.0 out of 5 stars This is not his best work
Reviewed in the United States 🇺🇸 on 8 November 2018
Verified Purchase
Although 'Jintey' is not indicative of the artist's talent, fans of Mr. Wilson will enjoy reading this play. The reader will witness the dramaturg refining his craft and many of the themes Mr. Wilson explores later are displayed here. But if you are inexperienced with him the preeminent african american playwright, I encourage you to start your reading somewhere else.
Read more
Report abuse

Goddess Reviews
5.0 out of 5 stars fast read, great story
Reviewed in the United States 🇺🇸 on 16 November 2017
Verified Purchase
I like how this play is broken down into parts. My son has used this for auditions and as with any monologue, it's best to read the entire story before interpreting the story. What happens and When? This was a great story. Finished within an hour
Read more
Report abuse