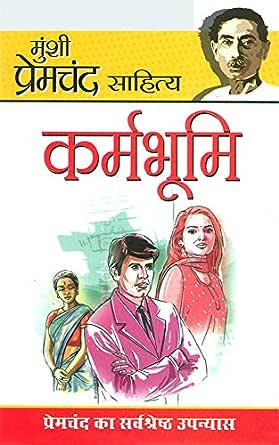 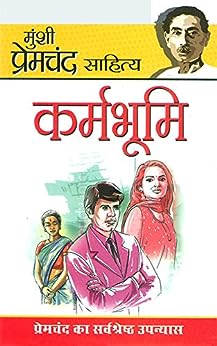 Premchand weaves this novel around the social goals championed by it. Human life is portrayed as a field of action in which the character and destinies of individuals are formed and revealed through their actions. Some of these actions, which might seem melodramatic in ordinary realistic fiction, gain resonance in Karmabhumi, placed as they are in this symbolic and philosophical framework.

Munshi Premchand was an Indian writer famous for his modern Hindi-Urdu literature. He is one of the most celebrated writers from India. Born Dhanpat Rai, he began writing under the pen name "Nawab Rai", but subsequently switched to "Premchand". His works include more than a dozen novels, around 250 short stories, several essays and translations of a number of foreign literary works into Hindi.

lalitmawkin
1.0 out of 5 stars We need another Munshi prem Chand in India
1 October 2018
Format: Kindle EditionVerified Purchase
Munshi prem Chand has a fine way of writing his novels .Karmabhumi was written around 100 years ago and lNDIA needs another prem Chand today .
Though Britishers have left but government after governmentin India are killing farmers and young boys .
After GODAN I read Karmabhumi and realised what made prem Chand a great writer .
You do not want to leave the book unless you have finished it .
Thank you .
I enjoyed reading the book ,

Vibhanshu
5.0 out of 5 stars Loving this Novel
24 December 2018
Format: PaperbackVerified Purchase
As always, Premchand sir is awesome with hi writings. The real novel King and pen fighter.. While reading you will not feel it is a fiction.. You will feel it's really happening in our society even 50 years after writing.
Every Hindi reader will love it. A must read book.
Read more
Helpful
Comment Report abuse

Apollo
4.0 out of 5 stars Old story relevant in our scenario.
13 March 2017
Format: Kindle EditionVerified Purchase
Can't say much about the story , Premchand has always send the message to society through his creations and karmabhumi is one of them. Its a must read. About Kindle edition, its a nice move to produce the book in hindi language. Good quality book in hindi as expected by Amazon Kindle. Only lacks the kindle feature of dictionary. But we can ignore it in case of Premchand and we do not require dictionary as it is a dictionary.
Read more
One person found this helpful
Helpful
Comment Report abuse

Jinendra
5.0 out of 5 stars Spellings to be corrected:
7 September 2019
Format: Kindle EditionVerified Purchase
There are so many spelling mistakes. Almost every page has multiple mistakes. This needs to be corrected else the new generation who will read these books on devices will carry very poor image of Munshi Premchand.
Read more
One person found this helpful
Helpful
Comment Report abuse

Mohit Rawat
5.0 out of 5 stars A great contribution by Munshi Premchand
22 October 2018
Format: Kindle EditionVerified Purchase
It is a very nice book written by Munshi Premchand. This book shows the life of high class people at that times and how the life of some kind hearted rich people changed and they put themselves in the fight for rights of Poors and discriminated people. After reading every book of Munshi Premchand you can imagine how much talented he was.
Read more
Helpful
Comment Report abuse
There are 89 customer reviews and 153 customer ratings.
See all 89 customer reviews
Write a product review
click to open popover
Unlimited FREE fast delivery, video streaming & more
Prime members enjoy unlimited free, fast delivery on eligible items, video streaming, ad-free music, exclusive access to deals & more.
> Get started
Back to top
Get to Know Us
Connect with Us
Make Money with Us
Let Us Help You
EnglishChoose a language for shopping.
© 1996-2020, Amazon.com, Inc. or its affiliates