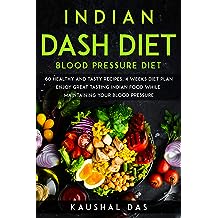 Indian DASH diet: 60 healthy recipes with pictures, 4 weeks diet plan (Indian Health Diet) 30 Sep, 2020
by Kaushal Das
( 4 )
₹369.00
In 2012, I wrote a book which is available on Kindle entitled, Healthy fusion Indian Soups Salads and Snacks. At the time, my need simply was to create recipes and meals which were healthy but not bland. Naturally, I also wanted to preserve my Indian flavors as much as possible.

Now that I am little older, I am focused on good health. Monitoring and maintaining normal blood pressure and sugar levels is becoming my primary goal. I decided to research the kind of diets that will help me in achieving my goal. We all know that eating salad and baked vegetables are very good for us; however, experience has shown, that for most folks, that diet is difficult to sustain. We are hardwired to follow our own habit which is especially true for food.

This book reflects my quest for maintaining hypertension or blood pressure (used interchangeably in this book) while still preserving natural Indian taste and flavor as much as possible.

The audience of this book can be anyone who loves Indian food and is also trying to maintain a healthy blood pressure level. The diets presented in this book should help you do just that; however, I am not a doctor, and this should not be considered medical advice. Blood pressure a serious disease, and only a qualified physician is able to diagnose or treat it.

My intent is not for you to use this book in any way to replace advice or recommendations of a qualified doctor. In exploring recipes that may help you maintain a normal blood pressure, I referred to medical journals and sites for selecting ingredients and processes for the recipes. Additionally, I used recommendations by the Mayo Clinic and Harvard Medical School wherever appropriate.

While Indian foods are known to be flavorful and often vegetarian and healthy, generally they are high in sodium. Extra care should be taken when preparing meals to most normal meals to reduce the sodium contents. This is important due to the fact that the people in South Asian and Indian countries tend to have higher than average risk of blood pressure, diabetes, and heart disease. It is essential for them to maintain a healthy blood pressure level.

In order to assist others in their quest for healthier eating, my approach in organizing the book consisted of two steps. First, I identified dishes that were generally healthy and had low sodium contents. Next, after shortlisting those dishes, I altered them in order to incorporate ingredients that were recommended by the Mayo Clinic / Harvard Medical School to enhance the nutritional value as well as reduce the sodium contents. The combination of the two steps resulted in simple, traditional Indian foods that are low in sodium.

It is my hope that this book will help you in your quest to maintain a healthy blood pressure level while still enjoying delicious Indian food. 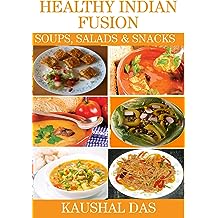 Soups and salads are incredible food for healthy living. However, as we all know eating them regularly not only becomes boring, after a few short weeks it becomes almost impossible. Most folks turn away from soups and salads after a brief interval.

For several years I have been experimenting with a variety of recipes for soups and salads in order to continue eating them regularly. I have also created several dishes for snacks and main courses based primarily on Indian ingredients but often using ingredients from other ethnic food. Indian food has a variety of herbs, spices and flavors that not only makes food very interesting but also preserves and enhances nutritional values while providing incredible flavors and taste. Many Indians are vegetarian. This has resulted in excellent use of a variety of vegetables, herbs and spices to enhance flavor and increase nutritional value. Primary sources of proteins used in Indian dishes are lentils, soy beans and paneer (a kind of cottage cheese).

However, typical Indian foods also suffer from heavy use of cream, butter, oil and fat. Often these same flavors and ingredients are used in many dishes resulting in similar taste. Sometime overuse of spices, especially hot spices, takes away the actual flavor of food.

In my dishes, I have primarily used Indian spices and ingredients, however I have adapted to locally available ingredients whenever appropriate. I tried to minimize use of butter, cream and other fats as much as possible. My focus was to create dishes that can be easily cooked in an average kitchen. Also I wanted to create dishes which can be consumed every day. A number of dishes are either low-calorie, or low-calorie options are provided so that diet or health-conscious people can also consume them regularly.

While Indian cuisines have a large variety of ingredients and incredible recipes, other cuisines like Chinese, Thai, Filipino and Mexican cuisines are also very rich in flavor. I have adopted several dishes in my book from other ethnic cuisine. I modified each dish and infused it with some Indian influence, however I tried to preserve the original ethnic flavors. Most of the ingredients used in this book will be readily available either in local food supermarkets or in Indian,South Asian or international groceries.

Some dishes included are those which are now more or less Indian, however they were adopted from other cuisines and over time became Indian. When I have presented an original dish, generally I have modified it to make the food simple and healthy.

This book is about simple, healthy and flavorful recipes using ingredients mostly available in local supermarkets, Indian or Asian stores. It’s not about creating a super-duper fancy five-star restaurant dish. While most recipes do not require any culinary skills or training, some recipes may require a few trials before they become perfect. 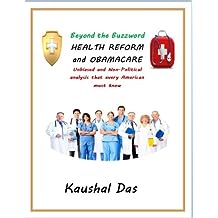 Health Reform and Obamacare (Beyond the Buzzword Book 1) 16 Oct, 2012
by Kaushal Das
( 8 )
₹196.33
About "Health Reform and Obamacare" book.
The Patient Protection and Affordable Care Act (PPACA), is commonly called Obamacare. This is a United States Federal statute signed into law by President Barack Obama on March 23, 2010.
The law is massive and spans more than 2000 pages of obscure and legal language, not counting many other supporting documents. The law is not yet fully detailed out and many provisions are still ambiguous. Only a handful of provisions have been implemented and few are being implemented as of this writing.

This book will provide just enough information for you to understand how this plan is going to affect you, your family, your community and ultimately your country. Why not more detailed information about each and every clause, each and every provisions? Simply because they are not known neither the impact they will cause.

The book "Health Reform and Obamacare" is not a book about the text in the law and speculations about their meaning. This book is about how it is impacting each of our life and how it is perceived by the general public, doctors and health care professional and health care industry

These are not expert level books and will not get into very complex and specialized discussions. It will try to provide link to resources for more detailed and specialized study wherever appropriate.

If you are unfamiliar with a concept or technology or barely read about it in newspaper or internet then this book will be a good resource for you. These books will also help if you are trying to acquire a new skill and or understanding a new concept.
Read more
inclusive of all taxes