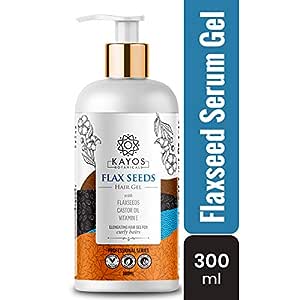 For external use only. Keep out of reach of children. Discontinue use if irritation occurs.

For external use only. Keep out of reach of children. Discontinue use if irritation occurs.

This curly hair gel will elongate and define your curls, no matter what your hair type or curl type, and give you that "Wet curly look" while your hair is dry.; this natural flaxseeds gel is meat for curls, coil and wavy hair.; our pure flaxseeds gel is enriched with flaxseeds and castor oil and provides the natural source of vitamin e. Flaxseeds offer natural remedy for hair regrowth and helps keep them strong, shiny and without any crunch, frizz or flakes.; directions:1. First cleans and deep condition hair.2. Detangle and section hair during conditioning phase.3. On clean and wet hair, start applying small amounts of gel from root to tip.; tip: use fingers to distribute gel and allow the hair to clump and curl properly. Avoid combs or brushes while applying.4. Once you've applied to all sections, use a small towel to gently wipe through over saturated sections if you've applied too much. Do not leave clumps of products in hair. Ingredients: aqua, flaxseeds oil, castor oil, vitamin e, glycerin, xanthum gum, tocopherol, phenoxyethanol, citric acid, bht, gum agar, japanese orange oil.

MVNS Niharika
1.0 out of 5 stars Not Worth It
6 January 2019
Verified Purchase
Sigh...I really, really wanted this gel to work a lot. I really did. It seemed amazing, being flaxseed based and cheap and affordable in the long run, not to mention 300ml would last a really long time, but it's failed me.

It has zero hold, ZERO hold. My waves have lost a lot of definition since using this, and have clumped weirdly, making my hair look like dreadlocks. My hair is still really dry and frizzy despite looking shiny, but the shine is more like a "coated in oil" kind of shine rather than a natural, healthy shine. Its weighed my hair down terribly, and I can't bring myself to finish the bottle at all.

However, there are some good points to this. It has absolutely zero cast and acts more like a creme gel than a gel per say. So it may actually work for those people who dislike the cast that gels give. Also, it has castor oil as the third ingredient, which I suspect really weighed my hair down and caused even more frizz. But, if your hair is really high porosity and loves castor oil, this might actually work for you.

I feel like this gel won't suit fine, thin and wavy haired people at all, as well as low porosity hair. It just sits on top. However, the idea is in the right direction.

If the gel had a little less castor oil or if it even was entirely removed, I feel like it might have a bit more hold. Perhaps a different version of this hair gel replacing castor oil with another lighter oil like argan oil? Perhaps a little more hold? I'm sure that version of the gel will explode in the CG community as an affordable gel in high quantity.

But at the moment, I won't buy this again. I'll stick to my Arata Hair Gel, but I have hope that the company is listening to the needs of the curly girl community.

Should you buy this gel?

If your hair is highly porous, thick, coarse and resistant to buildup, and if you've got a texture beyond 3A, I'm sure you can grow to like this gel. It won't suit people with wavy hair, medium to low porosity hair, fine and thin hair prone to buildup.
Read more
71 people found this helpful
Helpful
Comment Report abuse

Sharmistha Ghosh
5.0 out of 5 stars Hands down!
26 March 2019
Verified Purchase
The product is soo amazing compared to the price. There are so many brands and so many curling gels and prices are so so high. But this one worked on my hair. Just with a shampoo, a normal loreal conditioner and then this gel. Because i haven't received my cantu curl acrivator cream and shea moisture leave in conditioner. But just with those products the result is so amazing.
Read more

I experience no frizz while using this product, even on day 2 and 3 I refreshed my hair and still experienced great curls with no flakes or build up.

The best part is because of all the natural ingredients I can use this gel for my curls almost daily. FANTASTIC PRODUCT
Read more
35 people found this helpful
Helpful
Comment Report abuse

Ceida Uilyc
4.0 out of 5 stars Awesome for putting on the head overnight
2 January 2019
Verified Purchase
Its a hair gel in yellow color with lemongrass smell for detangling hair. Use it after putting shampoo.
Read more

Summer
5.0 out of 5 stars Must have product for curly hair.
30 April 2019
Verified Purchase
This product has quickly become one of my favourites in my curly hair care routine. It's a very convenient way to use flax seed gel on my curls. I love the mild citrusy fragrance, and it doesn't give me a migraine (a problem I face with many other products) This gives a fairly good hold when used alongside a curling cream.

I love that this product is made in India and is free from sulphates, parabens and silicones (enemies of curly hair) The product is value for money. I highly recommend this.
Read more

Smriti Das
4.0 out of 5 stars Love the product ❤️
17 May 2019
Verified Purchase
Superrrbbbb product... absolutely loved it...it hold my 3A curl for 2 days...nd quit reasonable..curly girls out there go for this gel ...
Read more

Akash gupta
5.0 out of 5 stars Gave it for my sister and she loves it ♥️
4 March 2019
Verified Purchase
I gifted this to my sister who is always troubled with her curly hair. She had the following observations about this product:

- The quantity and price of this product is appropriate. It give full value for money

- it has great fruity fragrance.

- It helps you moisturise curly hair and thus gives you a natural look.

- It could hold my curls very well for atleast 48 hours.

- Hold is not like a hair gel which is good because it moisturizes and give a natural look rather than a sticky look.
Read more

antara sarkar
5.0 out of 5 stars Loving this product
9 April 2019
Verified Purchase
We all desire soft flowy curls. This is until I very recently discovered a big secret. And ever since I cannot style my hair without a gel :D. So how should we apply gel to curly hair then? Here i have @kayosbotanic flaxseed hair gel for you ..
Benefits .. Prevents frizz by forming a protective layer over curl clumps

Helps curls to clump together

10 people found this helpful
Helpful
Comment Report abuse
There are 121 customer reviews and 138 customer ratings.
See all 121 customer reviews
Write a product review
Unlimited FREE fast delivery, video streaming & more
Prime members enjoy unlimited free, fast delivery on eligible items, video streaming, ad-free music, exclusive access to deals & more.
> Get started
Back to top
Get to Know Us
Connect with Us
Make Money with Us
Let Us Help You
EnglishChoose a language for shopping.
© 1996-2020, Amazon.com, Inc. or its affiliates