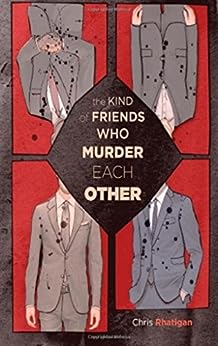 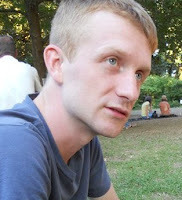 The Kind of Friends Who Murder Each Other Kindle Edition

4.2 out of 5 stars
4.2 out of 5
9 global ratings
How are ratings calculated?
To calculate the overall star rating and percentage breakdown by star, we don’t use a simple average. Instead, our system considers things like how recent a review is and if the reviewer bought the item on Amazon. It also analyses reviews to verify trustworthiness.
Top reviews

Dman4227
5.0 out of 5 stars Glad They're Not My Friends
Reviewed in the United States on 13 October 2015
Verified Purchase
“Three may keep a secret, if two of them are dead.”

Never has this quote seem more prophetic than in Chris Rhatigan’s The Kind of Friends Who Murder Each Other. Three people share their secrets and all three are willing to kill to keep them secrets.

When Simon, Mackey, and Slade set to drinking one night at the local bowling alley, their conversation follows the typical bar banter; taxes, the high cost of cigarettes, etc. This typical bar banter takes a dark turn when the friends each share a dark secret about themselves. The secrets range in depravity, from breaking into homes to watch people sleep, to being the driver in a hit and run accident and finally to admitting being guilty of murder, the friends each share a piece of their soul without thinking of the consequences.

The problem with their indiscretions become apparent when they each become paranoid that the others now have a bargaining chip over them. They each realize that the only way to rectify their mistake is through the elimination of the other two. Each friend sets out to put their own plan of self-preservation into action, while also watching their own backs.

One of the highlights of this book is the manner in which Rhatigan portrays the decomposition of the narrator’s mind and soul. At the beginning of the book, Simon seems like a stable, hard working man, but as the story progresses we start to see all the cracks that exist within him and we know this story won’t end well for him.

This is noir just the way I like it…a quick hit that leaves a mark. I am very glad to see this book getting re-released and it is apparent that All Due Respect has another winner of their hands. This book is a noir lovers dream and is best consumed in one sitting so you can truly appreciate Rhatigan’s genius.

William E. Wallace
5.0 out of 5 stars A Dark and Gritty Tale Reminiscent of Patricia Highsmith
Reviewed in the United States on 3 August 2014
Verified Purchase
I was afraid good solid pulp crime fiction was becoming extinct when the last of the pulp-paper magazines went out of business in the 1970s and 1980s. But the advent of electronic pulp 'Zines has created a whole battalion of new practitioners who are every bit as good as old masters like Fred Brown, Anthony Boucher, Jim Thompson and James M. Cain.

Chris Rhatigan is right up there at the top of the heap and if you don't believe it, give this slender novel a try. To me it was like a 21st Century gloss on "Strangers on a Train," Patricia Highsmith's psychological study of two men thrown together by a mutual criminal pact, yet it also is reminiscent of "The Stranger" by Camus.

The grim and gritty tone holds the reader right up through the last sentence, and the twist at the end came as a total surprise to me. This is a first-rate novel and any lover of noir should include it on his shelf, right alongside David Goodis, Jim Thompson and James M. Cain.
Read more
Report abuse

Dave Wilde
5.0 out of 5 stars Slackers, Convenience Stores, & Corpses
Reviewed in the United States on 12 January 2016
Verified Purchase
This is a fairly short, easy to read, slacker crime novel that starts out with three friends on a bowling night bragging about their most evil deeds and come up with what seem like whoppers of tales.

It may be a long way from working the register at the pump and munch and not knowing what to say to a gal who keeps coming round to becoming the next Jeffrey Dahmer, but maybe the distance isn't all that far. Maybe you don't know what people are capable of or what they are willing to do.

What really makes this novel is that Rhatigan gets the tone tuned in just right. The narration feels genuine. The story just unfolds like you are listening to a guy in a bar spin a tall tale.

Others have written about slackers and losers. But, it works here.
Read more
One person found this helpful
Report abuse

Michael Monson
5.0 out of 5 stars The world is an empty place, but I like that
Reviewed in the United States on 27 August 2013
Verified Purchase
This is a little tiny book. It's one of those little books held together by glue and stitching. The cover is slick and it feels good in one's hands. The front image is pretty and cleverly reflects the words inside, which is always good.
Chris describes the novella as "weird crime." I don't really understand that. To me it is just a regular noir crime novel. It might be the bleakest, most negative, most nihilistic noir crime book ever written. It is definitely the bleakest, most negative, most nihilistic noir crime book I've ever read.
Let me tell you something about me and my reading tastes. The bleaker the fiction I am reading is, the more empty and awful the story and the writing make the world look--the happier I am. Reading The Kinds of Friends Who Murder Each Other made me giddy with pleasure. The most horrible things would happen and/or Rhatigan's narrator would say something completely depressing about the world and I would laugh out loud. I'm serious. I love that kind of thing. Don't know why it makes me so happy, but it does.
The narrator/main character works at a place called The Pump and Munch, a 7-11 gas station kind of place. He bowls once a week with a couple of other guys who used to work there too.. He doesn't really like the guys and he doesn't really like bowling. He hates his job. He hates his boss. He hates his apartment and his neighborhood. He hates the cigarettes he smokes all day long.
Horrible things are said in the first couple of pages by the three friends; horrible confessions. Then, they all do horrible things to each other and other people until there is almost no one left. And, what is great, at the end, the whole thing starts all over again, in the same exact spot where it all began. Just like life.
I love how Rhatigan only uses the words and sentences necessary to tell his perfect little story. I love it that we know nothing about where the book takes place and that we know nothing about the backgrounds of any of the characters, especially the main character. Who needs all that detail, right?
But, I especially love the way the narrator describes the world he sees: it is ugly, greedy, empty, unkind, and there is no point to anything. This point of view is kept consistent throughout. Like I said earlier, I like that.
Check this out:

The waitress might as well have been a zombie, she had checked out so long ago, now she wandered among the living, dust accumulating in her skull, she lived to leave her job at the end of the shift, but why, what could she possibly do after work, how could she find any satisfaction.

Blue digits on the microwave said it was six-thirty-one, early but not exactly as early as I thought, but it never was, time perpetually grinding me under its fist.

I also love this little aside:

She poured a refill for Mackey, who licked his fingers. "Thank you, Linda." She grunted, he returned to stuffing food in his face, I inspected a large thumbprint on the window, they say that ever fingerprint is different but they're actually all the same.

Kindle Customer
4.0 out of 5 stars Three people can keep a secret if...
Reviewed in the United States on 16 July 2016
Verified Purchase
Rhatigan has helped revive noir, this novel knows that the paranoid rule the roost.
Read more
One person found this helpful
Report abuse
See all reviews
Back to top
Get to Know Us
Connect with Us
Make Money with Us
Let Us Help You
EnglishChoose a language for shopping.
© 1996-2021, Amazon.com, Inc. or its affiliates