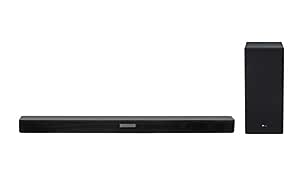 Frequently shopped for in related categories

The LG SK5 soundbar comes with DTS virtual: X technology which gives you a surround-sound like experience, without the multiple speakers and adaptive sound control which automatically adjusts the sound mode to enhance audio clarity.

Technical Details
Additional Information
Warranty & Support
Warranty Details: 1 year warranty provided by the manufacturer from date of purchase
Feedback
Would you like to tell us about a lower price?
If you are a seller for this product, would you like to suggest updates through seller support?

Allen prince
5.0 out of 5 stars Best of LG
2 October 2019
Verified Purchase
Hi.. all ,,Iam reviewing this after 3 months of usage,,,
When I started researching about Home theatre for our home,,, I searched all the websites like Google, amazon, flipkart, YouTube, ebay, clubfactory, for more than 6 months and had idea about home theatre and sound bars, home audio systems and it's features.
Expect all this thing's,,,,from my childhood to till now we for using so many kinds of audio systems in our home,,, we mostly used Sony, philips audio systems and custom made amplifiers,
Everything were old and we bored of all that things,, and decided to got the best of best audio system with all features in our planned 15k budget.

After all this,,, we went to the famous Trusted Home appliances stores in our location to bought Soundbar,,, we were visited totally 6 different stores,,, unbelievable in first 3 stores we visited they show us currently best selling Sony 5.1 soundbar 17k price range,,,(mainly in first 3 stores that we went they show us Same Model Sony soundbar) I take time to hear sound effect of Sony soundbar in all 3 stores, I heared Tamil songs, English songs, and EDM,s ,,,since it's a Sony it has very good sound effect,,,very loud and thumbing Bass effect,,, even though it's 650 watts RMS output it failed to impress me,,, and we went to 4th stores they had worthless products its totally waste of time to explain what they have,,, 5th stores they not even have a single ,,, soundbar in their store only they have old model 2.1 and 5.1 Home theatre..

Finally the 6th store that we visited was a LG office store,,,,
In their in saw this Beast LG sk5 2.1 soundbar,,,
LG store guys show me the demo of this home theatre,,, they played a song ,,,it was really crystal clear audio but sound effect look Samsung or Philips home theatres,,, then I asked the LG store representative,,,is that all effect this. Have???
He simply replied me,,, wait a minute sir... And revealed the magic of LG sk5,,, (wat he done simply "ON" the DTS-X mode is LG sk5),,, ( I was stunned..and it was unexplainable moment to experience a true sound frequency...
Dts-X is a magic of sound, you can't find dts-x on others brands like Sony or Samsung or Philips in 15k range...

And I told LG store rep that we bought this LG sounbar,,, and make payment process,, we had credit card, and give to them to check EMI plan to our card,,, they checked and said that our credit card have only 3, 6, and 9 months plan only we choose between this three tenure...but our plan was to made a 18 - months plan,,which they can't make the deal.. so we thank them for the demo and leave the store,,, with heart breaking feeling that we are unable to bought LG sk5... :(

On the Same day,,, evening we say LG sk5 in amazon which is also hav lots of EMI tenure plans..then wat we happily ,,, bought it from Amazon... So know that curved arrow mark under Amazon logo is not a symbol... Its smile of people's who makes shopping in Amazon...
Now let's see the features of LG sk5..

Things that are Good :

× Ultra great Overall Super Sound quality...
× Both Soundbar and subwoofer has good built quality LG done very nice in making product good
× you will get amazing crystal clear sound even at max volume
× feel the sound that comes alive around you
× Value for every penny that you spend

Things that are "Not" Good:

× Bass effect is very "average" means not so low bass,,, but it was little lower when compared to other 15k segment
× Small size subwoofer it has only 5 inch driver
× It suppose to have atleast 8 inch inch driver for 200 watts output support...

If u are planned to bought best 2.1 soundbar... In 15k range ... Undoubtedly it's the best ,,, even if you compared side by side with Sony or JBL or Samsung.. LG sk5 will beat that all its competitors in this 15k price range...

If you want to hear it's sound effect,,, you need to reach your nearest LG products showroom..to get amazed...

My Heartly thanks to " Amazon" to make it happen
Read more

Babu
5.0 out of 5 stars Lg sk5 soundbar
14 November 2018
Verified Purchase
Clarity was good.But the sound and base are not as expected.very much disappointed.
Read more
15 people found this helpful
Helpful
Comment Report abuse

MukundShekhar
1.0 out of 5 stars Average speaker
27 July 2019
Verified Purchase
Don't even feel the subwoofer exists. No display on the soundbar to read nor does it show volume control.. I do not suggest this product if your looking for good speakers with decent bass
Read more
3 people found this helpful
Helpful
Comment Report abuse

Amazon Customer
1.0 out of 5 stars Disappointing
6 October 2019
Verified Purchase
Faulty product. The base suddenly drops. Have tried contacting LG multiple times but no use. Their customer service is just horrible.
Read more
One person found this helpful
Helpful
Comment Report abuse
There are 27 customer reviews and 36 customer ratings.
See all 27 customer reviews
Write a product review
Unlimited FREE fast delivery, video streaming & more
Prime members enjoy unlimited free, fast delivery on eligible items, video streaming, ad-free music, exclusive access to deals & more.
> Get started
Back to top
Get to Know Us
Connect with Us
Make Money with Us
Let Us Help You
EnglishChoose a language for shopping.
© 1996-2020, Amazon.com, Inc. or its affiliates